Dancing Salon Style Argentine Tango Content from the guide to life, the universe and everything 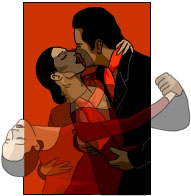 What is it like to dance the original tango, the one from Buenos Aires? More than any other dance, the Tango is a dance of intimacy, passion, and connection. Two equals share one of the most intimate of relationships available in public. They are close enough to feel each other's body heat, close enough that their eyes can lock and look deeply into their partner's very soul. Close enough, that if they are not careful, it will ignite a passion they never knew they were capable of experiencing.

Salon style Argentine tango is a conversation, one without words. Yet it explores one's deepest self and brings the innermost passions and desires to the fore, for all to see. It's not for wimps, nor is it necessarily the flash of stage tango either. Salon style Argentine tango is all about the connection that forms between a man and a woman. To dance it well is to dance from the heart.

To dance salon style Argentine tango well also requires being open to the moment, balanced, poised and able to move in any direction gracefully and easily. Other dances, like Viennese waltzes and polkas for example, have fairly rigid patterns of steps that repeat over and over again. However, the tango, the true tango from Argentina, doesn't. It is nearly a completely improvisational dance. The nearest thing to a requirement would be to take one step per beat of the music.

For such a highly improvisational dance, unusually, salon style Argentine tango is also a completely led dance as well. There are certain basic steps to learn, like walking forward, walking back, side steps and pivots, for example and, there is one set pattern to salon style Argentine tango; it's called 'walking to the cross'. But once these fundamental steps are learned and mastered, Oh! It's magic!

Walking to the Cross

With most walking dance styles1, it is possible to dance forever along each of the tracks. Salon style Argentine tango is different. Though the outside and centre tracks can be danced along for eternity, the inside track can only be danced along for a couple of steps before the follower will cross her left foot in front of her right. She does this in order to resume dancing on the centre track. This is what is known as 'walking to the cross'.

Salon style Argentine tango is actually a sort of a hybrid between being a purely walking style dance and a purely stationary style dance2. As it evolved in very small and crowded dance halls, couples typically could only walk a few steps along the line of dance at a time. Then they had to stop and circle around each other, as other couples blocked their right of way. Once traffic eased, they could resume walking along the line of dance.

A useful idea for dancing well is to imagine there's a column of energy connecting each partner, heart to heart while dancing. This column acts almost like a coiled spring, accentuating the tension of the frame while simultaneously connecting the partners. If they drift too far apart, the spring pulls them together. If the partners move too close, the spring pushes them back to their proper places. The distance between the dancers' hearts should be roughly four to eight inches.

For the woman, the challenge is to maintain the tension of the dance frame while simultaneously opening herself totally and just surrendering to the music and her partner's lead. For the man, the challenge is to maintain the embrace, entering into the woman's space while giving her just enough room to step into grace and beauty. It's a completely fascinating and intoxicating combination.

Generally, dancers learn how to be a follower first, before they're ever taught how to lead. One of the keys to being a good follower is simply to be fully present, vibrantly aware and alert. The focus of the attention has to be right here, right now, with no expectations and no worries. It takes a quiet mind and a peaceful soul to be a good follower. It also takes a tremendous amount of inner strength, as well, because it's more than simply submission. To be a good follower they have to willingly and totally surrender to the lead given. They have to allow it to penetrate their consciousness, accept it deeply inside, and then, finally, move into the step lead with abandon. No half measures, no hanging back and no second guessing.

For the follower, they need to be fully in their body and completely out of their head. They need to move from their centre, while being thoroughly grounded and balanced. They need to be fully connected to their own sensuality, sexuality and passion. They must be willing to welcome their partner's lead, open themselves up, and accept him entering into their space.

The leader has to lead with confidence and assurance. He has to move with grace, power and trust. The leader must trust his follower will dance with him, move with him, accept and respond to his touch willingly, eagerly and confidently.

That being said, once the leader indicates a lead, it's up to the follower to step into it confidently, and purposefully. If she wants to be coy for a moment and flirt, that's OK. But once she commits to the step, she needs to step into it with her whole heart, soul and being. Part of being a good follower is only to take the step requested, then stop. At that point, they pause, waiting, open to the moment for the next request.

It's up to the leader to keep track of where his follower is, and only request steps that are feasible. It's also up to the leader to make his lead clear. It really detracts from the follower's experience trying to follow a mushy lead. While the leader can, if he chooses, map out a sequence of steps, he should only lead one at a time.

While salon style Argentine tango is a completely led dance, it's also extremely improvisational. There is a leader, usually the man, and a follower, usually the woman. It's up to the leader to indicate what's to happen next and the follower, usually, complies. However, the lead is very fluid. It can, and frequently does, shift from one partner to the other. When the nominal follower does something other than what the nominal leader indicates, she assumes the lead for a step or two. The nominal leader, if he's good, accepts and flows with the nominal follower, following her lead.

How the woman chooses to interpret her partner's request is up to her; it's up to him to incorporate her response into the flow of the dance. He's dancing with her, not at her, or to her. Each partner is an equal co-creator of their 'conversation without words'. When it happens, the leader, if he's a good one, adjusts to the response given instead of the one anticipated. That's one of the things that make salon style Argentine tango so challenging. It really forces the dancers to be completely in the moment.

Therefore, the lead can shift from man to woman and back again. The man is primarily the leader, but also has to be willing and able to instantly shift into being a follower at a moment's notice. The woman generally is the follower, but she can, at any time, assert a lead. During the course of the dance, they mix and match according to their interpretation of the lead that is given. A useful maxim to keep in mind is; while the follower may not always be right, she is never wrong. That's one of the things that gives the dance its power and grace.

This ebb and flow of control means that the leader has to be very attentive to his partner and where she is, right here, right now. In return, the leader has the right to expect his follower be completely present and attentive to him while they dance as well. The emotional impact of that kind of total, focused attention is awesome. About the only other place one can get that kind of attention is from a lover, in bed.

When it works, it is magic. Salon style Argentine tango is an art form, an interpretation of passion through movement to music. The movements should be respectful while simultaneously portraying the passion and desire inherent in the dance. The dancers have to allow themselves to be carried by the music, intimacy, and sensuality of the dance to the very edge of their self-control. But, they still have to hold back, just a tiny, tiny bit. Otherwise, the emotional impact would simply blow them away.

It takes a lot of practice to become fluid. Some people just do the most basic steps for years, while continually discovering subtleties in them. Salon style Argentine tango is such an incredibly rich dance because it lets us reveal our innermost self. To get anywhere with it, one simply has to let go, surrender to the music and trust their partner. The level of intimacy that develops is incredible. And it happens, Bam! Right here, right now, moving to the flow of the music.

1A dance where you walk around the dance floor with your partner. Generally everybody goes in the same direction, which from the lead's point of view is normally counter-clockwise. Else you tend to play bumper cars. This is not a good thing. Waltz, Polka, Fox trot, and one-step are all dances using walking dance style.2A dance where you and your partner stay in the same small area for the duration of the dance. Jitterbug is a stationary dance style, relatively speaking of course.