Strasbourg, France and Kehl, Baden-Wurttemberg, Germany Content from the guide to life, the universe and everything 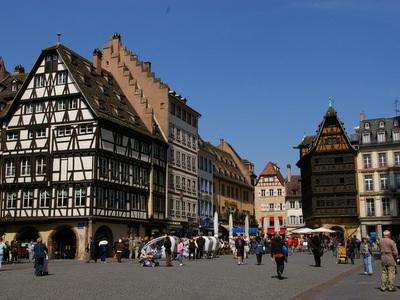 Strasbourg is a major city on the eastern edge of France, very close to Germany. By 'major' it is meant that Strasbourg has its own Préfecture1, which in France is the indication that it is the principal city in that area.

It is situated in the Alsace region, which has its own language, and which has a similar history to the neighbouring county of Lorraine. Both regions have been annexed several times by France and Germany and tracing their histories does not help to ascertain who they belonged to first. In spite of the local language however, Strasbourg itself is a very international city and French is its main language, with a lot of people who understand English. In France, it is often wise to at least try out French first, to show that you are a well-meaning Anglophone, rather than one who assumes he speaks a world-renowned language. That really gets their heckles up, quite understandably.

Strasbourg has several 'nicknames'; two similar ones are 'The Capital of Europe' and 'The Crossroads of Europe'. Ever since the time of the Roman Empire, Strasbourg (under the name Argentoratum) has been a major stopping point for travelling merchants and it is this that made it such a major city.

Under French administration, several European institutions have been established there, namely the European Institute of Human Rights, the Council of Europe (not to be confused with the European Council of Ministers) and, perhaps the most controversial of all three, the European Parliament (the only one directly associated with the European Union). It is often accused of being a whim of the French who wanted to have at least one European Union building in their country, and was thus commissioned as a very expensive and rather unnecessary extra parliament; there's already one in Belgium. However, with European democracy in crisis, it does help to have access to an extra building where European citizens can listen in on parliamentary debates.

Another nickname for Strasbourg is the 'Capital of Christmas'. Around December, Strasbourg's central island (the city centre) is literally packed with tourists all visiting Strasbourg's Christmas market, which consists of many delightful wooden stalls set up in the main squares and around the cathedral.

This cathedral took four hundred years to complete and at the time of completion was the equivalent of today's Petronas Twin Towers; the tallest man-made structure in the world. Visitors to Strasbourg should not confuse it with the twin-spired and much smaller Saint Peter's church. This may sound silly but it has been done many times, especially by anyone who starts off their exploration of the city from Quai des Pêcheurs.

Another place well worth visiting is Strasbourg's old quarter, La Petite France. It is indeed very small, and quite possible to miss completely, but it is a beautiful quarter full of the kind of architecture one would expect of a medieval town.

It is a great city for meeting people of other nationalities, especially in the Irish bars, Murphy's House and The Irish Times. The former can be found round the back of the cathedral. The latter is a little more hidden. There is a tram line running along Rue des Francs-bourgeois, and a stop on this line called Grand Rue. From here, follow the Grand Rue, which runs off to the south at a right angle to the tram line, and take the first street on the right. The Guinness sign should provide you with all the clues you need from there on. At any one time Strasbourg contains a whole load of Europeans and Americans (from both American continents). If you don't bump into one, it's because you haven't left your ho(s)tel.

In keeping with its international flavour, Strasbourg maintains proud links with a little German town over the Rhine called Kehl. At first glance, Kehl doesn't seem to contain much other than a whole bunch of shops and a kids' roundabout on the high street in the shape of a pfennig (the lowest unit of German currency). It's a good place to go and try out an extra language though, and has some good ice-cream parlours. But the area around its church is also nice to see, and there's decent picnic spots on the bank of the Rhine.

In particular, the bridge between the two countries (Pont de l'Europe) contains a display of poetry in every European language about the linking of nationalities. Nowhere more than here can one get an impression of the late 20th Century desire to unite peoples and end conflict.

1The central administrative body responsible for, among other things, the distribution of residence permits.