Grace Gifford's Wedding Content from the guide to life, the universe and everything 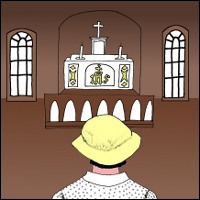 Great moments in history can be inconvenient to those not involved in their creation. They can interrupt the flow of daily life, as when one starts to church on a Sunday morning only to be caught up in a revolution. Other times, events roll over a man or woman, leaving careful schemes in ruins. Sometimes the participants in these unforeseen events just shrug and get on with it. Occasionally, they make something of the moment - and themselves - that stops the observer in his tracks.

Grace Gifford sits nervously in the chapel of Dublin's Kilmainham Gaol, smoothing her checkered dress, straightening her white collar and cuffs, adjusting her flowered straw hat. After all, a bride should look her best, although it is past 11.00 pm and she has been kept waiting there for more than five hours. There are no flowers, no bridesmaids, no 'something old and something new', but in the handbag she clutches are two gold rings - the most expensive the Grafton Street shop had to offer - which she has bought this day, 3 May, 1916.

Her wedding was delayed by a revolution a little less than two weeks ago, but married she will be, here and now. Because come the morning, Grace Gifford will be Mrs Joseph Mary Plunkett - and a widow.

Grace met Joe because of her desire to convert to Catholicism, the religion of her father and brothers - following tradition, the daughters of this mixed marriage were raised in their mother's faith. It is also the religion of the people she was working to help in the slums of Dublin, the worst in Europe, here on Britain's back doorstep. The well-born artist attended services in the Pro-Cathedral, abandoning the family pew in the Church of the Holy Trinity among the social elite of the Rathmines district. Her religious interest led to a friendship with Plunkett which grew into love.

Joe was Jesuit-trained, educated in Dublin, Paris, and, finally, Lancashire, where he was also a member of the Officers' Training Corps - acquiring other useful skills not usual in poets. The fact that this minimal military training qualified him to become Chief Strategist for a revolution in spe1 might have given pause to less sanguine spirits than those in the Irish Republican Brotherhood.

Grace and Joe planned a wedding. University Chapel in St Stephen's Green was booked. In spite of Joe's recent surgery to remove tubercular glands, they intended to be married on Easter Sunday.

Pádraig Pearse had other plans for the day, which he failed to share with Grace and her sister, the wife of fellow-rebel Thomas McDonagh. This is why Grace is now sitting in a darkened prison chapel, awaiting the arrival of a bridegroom under order of execution as member of an armed insurrection that has failed - utterly and miserably - to bring the British Empire to its knees.

The Easter Rising, as it came to be called, found Joe in the General Post Office, where he directed operations from a cot. Pearse, who joked that at least the revolution would rid Ireland of three bad poets2, proclaimed the existence of the Republic from the steps of the GPO. The green flag was flying, and the rebels hoped that - what with the might of the Empire distracted by the Great War - they would be able to hold off the British for about three months, forcing negotiations. They managed six days.

When the British sent a gunboat up the River Liffey to shell the town, things fell apart quickly. Pearse and his co-conspirators, having abandoned the GPO, watched from a window as innocent bystanders were gunned down in the streets, and decided to surrender. The ringleaders were rounded up, court-martialled, and condemned to death. Joe's execution was scheduled for the morning of 4 May.

Till Death Us Do Part

At 11:30 armed guards bring in Joe, who is handcuffed. The two have no time to speak to one another, nor any opportunity to touch. By the light of two candles, the prison chaplain marries them at the altar. They exchange rings and vows. Two British soldiers serve as witnesses.

Afterwards, Joe is led back to his cell, while Grace is escorted to a nearby home for more waiting. As she follows the guard outside, she does not think (how could she?) that someday she, too, will come to live inside these forbidding walls - and leave a lasting legacy in the form of a wall painting. She does as she is told - for now - and waits for further word.

At 2.00am, the word comes: Grace is permitted her final moments with Joe. In the cell, husband and wife stand staring at one another in the company of 15 soldiers and a sergeant with a stopwatch, who counts the ten-minute period they have in which to say goodbye. Again they are not permitted to touch.

Grace marvels to herself that she and Joe - who have never had enough time to say everything they wanted to say to one another3, are now struck dumb. The sergeant informs them, 'Your time is up.'

A little over an hour later, Joseph Mary Plunkett is executed by firing squad.

Fighting Back at History

If someone is doing a bad thing, and is not inclined to stop doing it, it often helps if you can make him feel ashamed of himself.

As the new widow steps out of Kilmainham that morning, she cannot know the effect she will have with her refusal to be jilted by the hangman. Four days later, the Daily Mirror will carry an admiring account of her bravery and loyalty, influencing public opinion in Britain. Dubliners who jeered at Pearse's proclamation will catch a vision from Grace's act.

Grace herself is destined to become an active member of the movement, a Diehard who angrily rejects the compromise of the Irish Free State as a betrayal of what her husband died for. She will become a symbol for the determination of the Irish people to chart their own destiny.

Grace will spend the rest of her life as a widow, raising her sister's children, using her talent as an artist to earn her living, with a wide circle of friends in Dublin. She does not know this now, and we can only guess at her feelings as she makes her way to her parents' house to tell her mother - who does not know, and will be angry - what she has done this day.

We do know from Grace's life that she is determined to finish what Joe had started: to help build a world in which fathers, husbands, and sons are no longer forced by conscription and want to go and fight someone else's war, a world in which the poverty around her can be fought by the people themselves, a world in which oppression and fear give way to openness and hope.

History can tear hopes to shreds. Grace will never have her wedding night, never hold Joe's child in her arms, never see him again this side of the grave. But history does not always have the last word: sometimes the victims fight back, and bend history, just a little.

For now, as Grace walks away from Kilmainham Gaol in the predawn darkness, we can see by a streetlamp the dull glint of gold on her hand - the most expensive ring in Grafton Street. In that glint is a promise.

Valerie Malin has compiled an excellent account of Grace's story. Her website includes photos and a certified copy of the wedding licence signed by Fr Eugene McCarthy. The certification of the official copy is in both Irish and English, a detail that would have been appreciated by Joseph Plunkett, a member of the Gaelic League.

The Easter Rising, a website detailing a personal collection, contains photographs of all the major participants in the event, as well as postcards showing the extent of the destruction in Dublin in 1916. Well worth a visit.

'I See His Blood Upon the Rose' is Plunkett's most famous poem.

1This is a Latin expression meaning 'in hope' - that is, the revolution was still a dream. Educational systems of that time emphasised Latin, and both Grace and Joe would have used such phrases as a matter of course. Modern readers who aspire to an understanding of the period might wish to find a Latin reference or two.2Himself, Plunkett, and Thomas McDonagh.3Grace's words.