A History of the Australian Broadcasting Corporation News Themes Content from the guide to life, the universe and everything 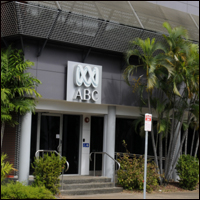 From the the Australian Broadcasting Corporation's first radio news bulletins in July 1932 up until now, there has almost always been a theme. And, for much of that time, it was 'Majestic Fanfare', a short piece of music composed by Charles Williams in 1935.

It was chosen as the new ABC News theme for various reasons, among them the fact that edits to 'Advance Australia Fair' were necessitated by its length as compared to the ideal duration of a news theme. At the time, this practice was considered disrespectful by some and so, on New Year's Day 1952, 'Majestic Fanfare' became the theme for ABC News. When TV broadcasts began in Australia in 1956, 'Majestic Fanfare' was retained as the ABC News theme.

A series of edits were made to the original minute-long recording of 'Majestic Fanfare' - the two used most often were 18 and nine seconds long. A practice was established during the 1970s whereby the 18 second edit of 'Majestic Fanfare' would be used for extended radio bulletins (generally 15 minutes long and, these days, mostly only broadcast daily on ABC Local Radio at 7.45am) and the nine second edit would introduce all TV and all other radio bulletins. The practice is still in use today.

In 1982, when the ABC celebrated its 50th year of broadcasting (and changed from a Commission to a Corporation), 'Majestic Fanfare' was, in the words of its 1982-83 Annual Report, 'subtly updated'. The update was used only on TV bulletins and featured several extra tracks performed on synthesisers.

Around this time, ABC Radio News lost the original version of 'Majestic Fanfare' and a series of synthesised news themes were trialled in succession, one of which was a purely-synthesised 'Majestic Fanfare'. There was public outcry at the loss of one of the great symbols of the ABC (an outcry that threatened to repeat itself in early 2005 - but we'll get to that).

In 1985, when the ABC's News and Current Affairs division underwent a shake-up, the original evening ABC TV News and Nationwide (current affairs) programmes were scrapped and replaced by an hour-long programme called The National*. At this point, ABC Television, too, lost 'Majestic Fanfare' - it was replaced by the orchestration of Alan Hawkshaw's Best Endeavours used (then and now) as the theme for Britain's Channel 4 News.

Within nine months, The National itself ended for a variety of reasons. In its place, ABC TV News returned, but with no 'Majestic Fanfare' in sight*. Instead, a specially-composed theme (written by Tony Ansell and Peter Wall, who also contributed a number of ABC News and Current Affairs themes) was used. Over the next nineteen years, the Ansell/Wall theme became a fixture at the ABC and was updated only once, in 1997.

Back on radio, the decision was made to bring back 'Majestic Fanfare', but not in its original form. Australian composer Richard Mills arranged Charles Williams' music in a more 'Australian' style. Three main versions of the theme were written - the full minute-long work and two 0'18" variations*. The music was recorded in 1988 - Australia's Bicentenary - by the ABC-owned and -operated Sydney Symphony Orchestra, conducted by Stuart Challender.

In the early 2000s Richard Mills donated his original pencil-written manuscript of his three variations of 'Majestic Fanfare' to the Louise Hanson-Dyer Music Library (housed in the Baillieu Library) of the University of Melbourne.

One version of 'Majestic Fanfare' has not yet been mentioned, and that is the remix used on Triple J Radio's news bulletins. With the exception of NewsRadio, Triple J is the only ABC radio network that doesn't carry ABC Radio News bulletins - it instead produces its own using both the ABC's and its own resources. In 1991 the original Queen's Hall Light Orchestra recording of 'Majestic Fanfare' was remixed by John Jacobs and Paul McKercher into a 10 second theme that's been used by Triple J ever since.

Among the samples used in the remix were Paul McKercher on guitar playing the opening bars of 'Majestic Fanfare', a drill in use and the 'scratch' from hip-hop group NWA's song 'F*** tha Police' (asterisks added at the researcher's discretion). At the time, the NWA song was banned from Triple J and, in a way, the song has been played several times every day since 1991. In 2005 McKercher worked out that, if he had a cent for every time the news theme (and so the N.W.A. scratch) had been played on Triple J, he would've been able to 'go out and buy [himself] a crappy old Holden*'. The beat used in the Triple J News theme was sampled from a section of Prince's 1989 song 'Get Off' 'without Prince or any of his posse corrupting it'.

All the elements of the theme were loaded into an Akai S-1000 by Jacobs and then played in order off a Casio keyboard*.

Since the 1980s there hadn't been a 'standard' ABC News theme across both radio and television - this was to change in 2005 when a new theme, composed by Australian film and television composer Martin Armiger (with the assistance of John Gray), was to debut as the ABC TV/Radio National News Theme**.

The new theme came in several variations - chiefly, there was the 27 second opening theme (with a seven second percussion 'tail' later added) and a two minute 12 second closing theme. But there were also arrangements of the closing music that varied not just from state-to-state, but apparently also from bulletin-to-bulletin.

The original reason given for the state-to-state variations in music was that one version was recorded by the Sydney Symphony Orchestra and another was recorded by the Melbourne Symphony Orchestra (also ABC-owned and operated)*. However, there are at least three major variations of the closing music and two versions of the opening theme, although the differences between the opening theme versions are far less drastic than the differences between the closing theme versions. As far as this researcher has been able to find out, the theme (and possibly all its variations) was performed by the Sydney Symphony Orchestra with the percussion groups Synergy and TaikOz.

Two 'stings' were also written, both of about six seconds in duration, one of which was originally used both during the bulletin (following the recap of headlines halfway through) and to open news updates. After about a month the second of these stings, one which more closely reflected the 27 second opening theme, replaced the other at the start of news updates (with the exception of the 6.30pm updates, where the first sting is still used).

Although the Armiger theme was commissioned as a national theme that would unite the three ABC News 'brands' - on radio, television and ABC Online - this never happened. As in the 1980s, when 'Majestic Fanfare' disappeared off both radio and television, there was public outcry at the loss of ABC TV News' long-standing Ansell/Wall theme, with many critics complaining that the new theme wasn't as attention-grabbing and 'punchy' as the old theme and that, while it was a fine orchestral piece, it wasn't suited for a serious news bulletin. For these and other reasons, the Armiger theme was never used as the ABC Radio News theme and 'Majestic Fanfare' still stands as the radio bulletin theme. Because ABC News on television and ABC online have always shared resources, the ABC's online news bulletins use the Armiger theme.

Legal action was also taken against Martin Armiger by Peter Wall (Tony Ansell passed away in 2000), who claimed that Armiger had plagiarised the opening three notes (A-G-A) from the Ansell/Wall theme, which Wall described as 'the heraldic signature'*. The case was resolved in mid-2007 after discussions with both the ABC and the Australasian Performing Rights Association*.

In recent times, though, the now 20-year-old Mills arrangement of 'Majestic Fanfare' has, in the eyes of some, become tired. An internal review of ABC Radio News in late 2005 found that 'Majestic Fanfare' was in need of an update. As of June 2009 nothing seems to have become of this suggestion, although it may have been related to the fact that the Armiger TV theme was designed to also be used on radio.

However, following Peter Wall's case against Martin Armiger in relation to the latter's ABC TV News theme, Wall commented that the recording of Richard Mills' arrangement ended on a flat note, describing it as being akin to 'a fingernail on the blackboard' and suggesting that it be re-recorded. As with the aforementioned suggestion to update the theme, nothing has apparently been done to address this as yet*.

ABC NewsRadio is the only part of ABC News and Current Affairs to never have carried 'Majestic Fanfare' in any form - since its launch in 1997, it has used various themes, none of which were based on 'Majestic Fanfare'. The current NewsRadio bulletin theme was introduced in 2002. During 2006 and 2007, a different theme was trialled, but ultimately dropped.