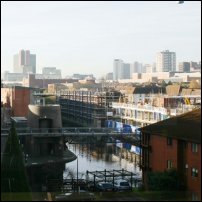 The Birmingham Canal Network has a history that dates back to the Industrial Revolution. The canal system saw a period of rapid growth that spanned the mid to late 18th Century right up to the early 19th Century. It began in the Black Country, the heart of the Midlands, before spreading rapidly nationwide.

The new iron age needed coal in great abundance to feed the ever-growing number of ironworks and foundries that had sprung up throughout the Midlands. As well as coal, other raw ingredients such as iron ore were needed in large quantities. A new method of delivering these materials necessitated a more direct route and a capacity for larger quantities than could be carried by road, hence the idea of canals and canal barges came to fruition.

The canal system was also used to deliver the finished products, notably those of the potteries in Stoke-on-Trent. Warehouses sprang up along the length and breadth of the waterways network.

The first of the canals in the Birmingham network to be built was, unsurprisingly, the Birmingham Canal, which started at Aldersley Junction, just north of Wolverhampton, and traversed through to Gas Street Basin in the city centre. The main loading and unloading stations were at Newhall Wharf and Paradise Wharf – also known as Old Wharf.

Within a relatively short period of time there followed the Birmingham and Fazeley Canal, which ran from Tamworth in Staffordshire to the Birmingham Canal.

The Wyrley and Essington Canal

The Wyrley and Essington Canal acquired its nickname, The Curly Wyrley, by virtue of the fact that it was dug through areas already built up with housing, factories and warehouses. Its route was somewhat tortuous, wending its way around existing obstacles. Unlike other canals that tended to take the most direct route or followed a contour line, the Wyrley canal builders were not able to demolish buildings or to clear a straight path. As a result, this canal has more twists and turns than any other canal in the UK.

Several branches were built to access many of the new warehouses and factories that had been built. Its original route ran from Wolverhampton to the Birmingham Canal and then on to places such as Lichfield and Cannock. It ultimately became part of the BCN.

Many of the smaller, less well known branches of the Curly Wyrley have long since fallen into disuse, with a lot of sections actually filled in. Projects are ongoing to reinstate some of the branches, but it's unlikely that it will ever be fully restored; some branches have had houses built over them.

The Birmingham and Fazeley Canal

The Birmingham and Fazeley Canal runs from the main Birmingham Canal at what is called The Old Turn Junction, close to the the National Indoor Arena, down to the Coventry Canal at Fazeley Junction, in Tamworth, Staffordshire. The canal is just over 15 miles long and has a total of 38 locks.

The Worcester and Birmingham Canal

This canal link unsuprisingly joins Worcester to Birmingham but actually starts as an offshoot of the River Severn. It winds its way to Birmingham ending at Gas Street Basin in the city centre.

Although only 29 miles long, it has 58 locks, including the longest single flight of locks in Europe, totalling 30 in one flight. In total, the locks raise the canal's level by 428 feet.

The traditional canal barge, also known as a narrowboat, had an overall length of 72 feet, including the rudder. Its maximum width, or beam, was seven feet, and it was flat-bottomed. The draft of the barge – that is, the part below the waterline – would obviously vary according to the load carried. The fully laden maximum draft would be between two feet six inches and three feet.

Prior to the introduction of a national standard for the overall length of a narrowboat, the locks of some smaller branch canals allowed a maximum boat length of only 52 feet. Once the error was realised, the design was amended and the 72-foot length was adopted nationwide. It was deemed too expensive to alter the locks, so today, those with 72-foot narrowboats need to ensure their route doesn't encompass one of these minor canals with their restricted lock lengths.

The lead barge had a small cabin to the aft end which housed the living quarters for the bargeman, his wife, and any family, too. The rest of the space was for cargo. Narrowboats usually towed one or two craft, which looked just like open boat hulls with a point or prow at each end. These were known as Buttys, and had a large detachable wooden rudder, known as the tiller. This design saved time in turning a number of these craft around for the return journey. All the bargeman had to do was detach and either float round or carry the rudder to the other end, re-attach it, and they were ready to go again. Only the main barge needed turning around.

The barges were horse-drawn and only became self-powered when steam power became fully established. At the end of the steam age they were powered by the newer diesel engines, though by this time their usefulness had been outlived. The advent of the internal combustion engine, better roads, bigger lorries and the expansion of the railway network sounded the death knell for the waterways as a going concern, and they fell rapidly into decline for the remainder of the industrial age. The commercial use of the waterways is now more or less consigned to the history books, and today the inland waterway network is used primarily for leisure purposes.

One of the early and best known canal companies that ran a fleet of barges during the heyday of the industrial revolution was a company named Fellows Morton and Clayton. Based in Saltley in Birmingham with their own dockyard, they built and ran their fleet from the 1830s right up to the time the waterways were nationalised in 1948.

The company was the first to invest in iron boats, some of which are still around today. They were also the first to move from horse-drawn to steam power for their boats, and then on to diesel engines.

A lot of the original Clayton narrowboats are in private hands and have been converted into pleasure craft, however one unconverted horse-drawn barge still exists in its original state. This boat, the Gifford, is maintained and run by the Boat Museum Society, based at Ellesmere Port in Cheshire. It is actually a working exhibit and can be seen anywhere on the canal network, with the museum being her registered home port.

James Brindley was one of the first civil engineers given the task of designing and building the first of these new inland waterways. Born in 1716 near Buxton in Derbyshire, he made his name in civil engineering and more importantly, in canal building.

Brindley carried out the relevant surveys and subsequently oversaw the building of the first canal in Britain, the Bridgewater Canal, which was completed in 1765. This was to set the scene for the rapid expansion and ultimatelythe great age of canals in the UK.

Others, such as Thomas Telford would follow but it is accepted that Brindley was the pacesetter at the time. He surveyed, built or oversaw the building of a total network of 375 miles of canals and navigable waterways, 170 of which were later to became known as the Birmingham Canal Navigations.

In 1827, Thomas Telford was given the job of designing and building a new BCN mainline canal, in order to improve on Brindley's existing mainline. One of the issues Telford needed to address was congestion on the existing canal system; having only one towpath created delays for boats passing each other. Rather than follow the land contours as Brindley did, Telford cut his canal in as straight a line as possible, digging tunnels where needed. He also laid a towpath on both sides of the canal, to improve the flow of traffic. The result was that both canals, the old and the new, run parallel for a number of miles between Tipton, Smethwick and Gas Street Basin with Brindley's contour canal crossing the new mainline canal in various loops.

Other civil engineers of note involved in the development and building of the canal system were:-