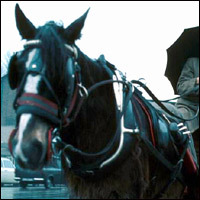 The Shire Horse is the biggest of the heavy horses found in the UK. It is known as the 'gentle giant' — working for and with man for hundreds of years. The stallion grows to a height of 18 hands (6ft - 2m) or more, and is one of the tallest of the heavy horse breeds. Colours for this breed can be black, brown, bay or grey. It has a distinctive feature in that it has long, silky hair, usually white, on the lower part of its legs.

The Shire first came to England in 1066 with William the Conqueror. It was used in battles quite literally as a living armoured tank, until firearms came into use. Its sheer size and weight meant it was ideal to carry a fully armour-suited knight into battle even though it wasn't generally regarded as a riding horse.

The Shire was to be seen all over the countryside in its heyday, usually pulling ploughs. It wasn't actually known as the 'Shire' when it first appeared. It was generally referred to as a 'cart horse', as it was seen pulling carts of all shapes and sizes, taking produce to market among other things. In 1878 the Pedigree Shire Horse Society was formed and the horse was formally given the name of the English Cart Horse; however, this was changed again in 1884 to just the Shire. In the meantime a smaller cart horse known as the Clydesdale, found mainly in Scotland, had been turned into a true heavy horse by using the English stallions for breeding.

The newly formed pedigree society also exported the Shire, mainly to the USA, where the American Shire Horse Association was formed in 1885.

The Shire was favoured by the 'rag and bone men' in the 1950s and 60s. These were people who went round houses collecting scrap and other discarded household items. Due to the weight of the stuff they collected, the Shire was ideal for pulling such a burden on the old carts.

It was after the First World War that Shire numbers started to decline, albeit slowly. The wider use of lorries and tractors started the trend but this mechanisation was at times inefficient and beyond the financial means of many during the Depression. The Shire held its own until the start of the Second World War. This rapidly brought the end of the horse age. Food was needed in bigger quantities and mechanisation in the form of tractors and lorries was also more efficient and faster.

There was one variety of Shire horse that emerged in the Eastern Counties as a result of imports from The Netherlands during the 17th Century. It was a dull shade of black, sluggish in both character and behaviour, and this variety became known as the 'Black Horse'. The breed was then improved by introducing mares to pedigree stallions in the Midlands by Robert Bakewell, where the offspring became known as the Bakewell Black.

There used to be a population of well over a million Shire horses in the UK, but by the late 1950s and 1960s this had reduced down to a few thousand nationwide. Over the last 25 years or so the Shire horse has seen an increase in popularity and numbers. Although no longer used commercially for farming, some breweries employ their strength and tenacity for pulling drays. A renewed interest in the Shire has meant the Shire Horse Society today processes about 500 new registrations annually. They are exhibited at various country shows, delighting audiences; sometimes they're the star attraction. The future of the Shire horse is looking healthy, though careful monitoring is carried out by the Society in conjunction with the Rare Breeds Survival Trust to monitor its numbers.

Below is a list of the Heavy Horse Breeds, the Shire being top of the list as the most popular and best known of the heavy horses.

The numbers for each of the above breeds varies (as of 2008), but overall they are historically very low. There are renewed efforts underway to preserve the various breeds via an assorted array of clubs, societies and individuals.