Theme Parks and Roller Coasters Content from the guide to life, the universe and everything 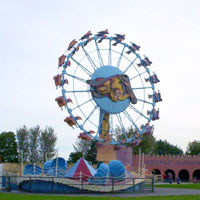 Many people love nothing more that going on a day out and strapping themselves to a steel train and plunging through a heart-pounding steel maze. Does this sound like good fun to you? If you are one of the millions of people who visit theme parks each year then read on, you are certainly not alone. First, a bit of history of the roller coaster.

The Mauch Chunk Railway is the American beginning of the roller coaster. The Mauch Chunk Railway was devised not as a pleasure ride, but as a transportation system for the coal mining industry. The coal mines in the area had a basic problem: how to cheaply and effectively transport the coal from the mines on top of the mountain to the port in Mach Chunk, some 18 miles downhill. To solve this problem, a railway was devised that would run this course in such a way that all the workers had to do was load the mine cars, push them off the top of the mountain, and they would follow the 18-mile course purely by gravity. This was possible since 17 of the 18 miles were downhill. Mules were employed to haul the empty cars back to the top. Shortly thereafter, a car for the mules was built so that they could 'ride' back down with the coal.

Although it is not recorded, someone got the bright idea of loading the mine cars with people and pushing them down the hill. The 'ride' became an instant success. The track was used for coal mining during the day, and as a pleasure ride at night. To make life easier, the mules were replaced by a steam engine that would haul the empty cars up a longer but more gradual incline to the top of the mountain. This helped efficiency by having a motorized means to keep empty cars coming up, on a separate track, while coal was being transported down the main track. Soon both tracks became part of the Mauch Chunk Scenic Railway. People paid $1 to ride up on the incline (motorized track), then the engines were removed, and they were sent back down the main track, with just gravity to push them along.

The next stage, built in 1890, was the switchback railway. This was the early true 'roller coaster'. It was built of wood, on a wooden structure. To take part, riders climbed up a flight of stairs to board the coaster car, which was then pushed out of the station, so it went down a hill and over a few bumps until it ran out of momentum at the other end. Then the riders would exit, and walk up a second flight of stairs, while workers hoisted the car back up to the top of a second station, where a switch track put it in line with an identical course in the opposite direction, the riders got back in and rode back to the first station. On the early rides, the focus was more on sightseeing, than thrills. Thus, the coaster cars consisted of a long bench, facing out sideways, and the ride traveled at six miles an hour. It wasn't too long before someone made a U-shape version of this that did not involve the mid-course switchback. Lastly a hoisting mechanism was added. At first these were cable ropes, and then the familiar chain lifts. The ride we know as the roller coaster was born.

Next up were wooden coasters. Some worked out better than others. For example there were:

The more steady earners, however, were the out-and-back circuit coasters, figure 8s and Twisters.

Coaster building flourished from the turn of the century throughout the roaring '20s, with an estimated 2000 coasters built in the USA alone. Every park of some size had a coaster. While these were not as intense as today’s rides, imagine having one in every major city. Sadly, this trend did not last too long, and the Great Depression, as well as World War II, made it seem like the roller coaster fad had ended, with coasters being demolished at an alarming rate. We almost came to the brink of roller coasters being a novelty item, only found in obscure parks, existing as a memory or legend to most of us.

In 1955, Disneyland opened and the theme park era was on. While theme parks are often cited as the main reason why traditional parks are failing, Disney helped bring a new form of the roller coaster to the national spotlight. Matterhorn Mountain, built in 1959, was the first tubular steel coaster, made by Arrow. The ride did not do any loops or anything fancy, just a gradual series of dips through a mountain. This change made an unofficial line of demarcation, on one side steel coasters were for theme parks, on the other wood coasters were for traditional parks.

The Sky's the Limit

In 1975, Arrow designed the first successful inverting roller coaster, the Corkscrew. This ride features two inversions and little else, as the purpose of the ride was the novelty value of going upside down. Some parks have added a vertical loop or two to the ride.

Things soon began to get even more exciting with the suspended roller coaster, first tried in 1982 at Kings Island, this Arrow proto-type ride had its trains hanging down from the track to give the effect of flying. This Kings Island prototype did not work well, but Arrow proceeded to produce several working models. The features of a suspended coaster are cars that are free to swing to the side and they don't have loops. These were soon followed by the likes of the inverted and the stand-up roller coasters.

Some Coaster Facts and Figures

Roller coasters are usually made of steel and have one or more 'trains' made up of individual 'cars' running around the track. The ride usually begins with the train going up a long chain lift, gradually higher and higher, then when it gets to the top, there is no place to go, but down. There are winding stretches of track with special features ranging from vertical loops and heartline spirals to inline twists and corkscrews. Here is a summary of some of the more common roller coaster terms.

There are of course other ways for thrill seekers to spend their time at theme parks, and a number of other rides have popped up:

Here are some roller coaster record breakers, all of which were current at the beginning of 2001. You may notice that some of these records are a little obscure and are probably cited just to attract visitors, but they make for interesting reading.

1A galleon is a large Christopher Columbus-style sailing ship.