Lake Powell, Arizona, USA Content from the guide to life, the universe and everything 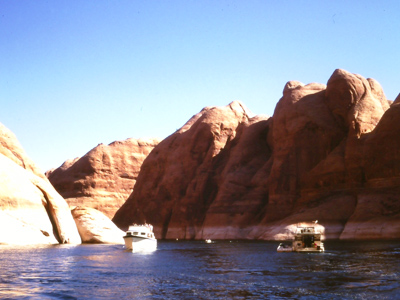 Lake Powell is an artificial lake in the south-western United States. Rapidly becoming a popular tourist destination, it is located partially in the southern part of Utah, and partially in Arizona. It was formed around 1956, when Glen Canyon was flooded on account of the presence of a newly placed dam on the Colorado River.

Since then, Lake Powell has slowly and steadily increased in popularity as a tourist destination for various forms of outdoors activites, whether it be water-skiing, boating, hiking, swimming, or sunbathing. The most prominent, and arguably most enjoyable, activity in which to partake at the lake is houseboating.

The putative houseboater will typically call on a few long-time friends to share the upward-spiralling costs of houseboat rental1. If they are extremely optimistic, unlucky, and foolish, they may have stumbled their way into a timeshare which are notoriously difficult to get out of afterwards. If they have access to a great amount of wealth, they may even purchase a houseboat of their own.

Regardless of the method of securing a houseboat, the time soon arrives for the tourist to head out to Lake Powell. Unless s/he is incredibly fortunate (and incredibly boring) and lives in the single nearby town of Page, s/he will likely have to journey a sizeable distance to Lake Powell (Lake Powell is popular with the denizens of Los Angeles, over 10 hours away), most likely by car. This vehicle will typically contain a family, along with an outrageous amount of luggage and supplies (always greatest on the first trip to the area). There will probably be a variety of objects either tied to the top of the vehicle, or pulled along behind it. This heavy load diminishes gasoline mileage considerably. Lake Powell visitors are notorious for overpacking.

On arrival, the typical scenario is for the males to secure the houseboat, while the females secure food for the week (unless they brought groceries with them). After much tedious shuttling of luggage, groceries and other supplies down a hill to the houseboat, and after an enormously long wait for paperwork, the boat is ready to leave, subject only to the hour-long how-to-drive-a-boat lesson. Now, the vacation begins!

Houseboats depart from one of four marinas on the lake. The most popular, Wahweap, is surrounded by a lodge, motel, enormous boat parking area, and small but decent-sized town. Bullfrog is the second most popular origin, and is more secluded (no town, not as many boats). Halls Crossing is a hop, skip, and a jump away from Bullfrog, and may not even rent out boats any more. The extremely adventurous, uneducated, strange, and privacy-seeking will launch out of Hite marina. Hite consists of a parking lot, administrative trailer, marina with ten boat parking slots, a convenience store, and nothing else for about 100 miles. The future of Hite's rental services is highly questionable.

Beaching for the Night

Eventually the boat is taken out and driven for a few hours, at which time a suitable beach is hopefully found on which to spend the night. At this time - perhaps after a suitability check by speedboat - the houseboat driver engages the engines at full blast and rams the vessel up onto the beach, while all aboard brace themselves and any loose crockery for impact. Boaters should take special note to assure that the beach is in fact composed of sand, not rock. After beaching, anchors are unloaded and buried in the sand.

With the rising number of tourists, the chance of being forced to share a beach with other vacationers has increased. In recent years, boaters have been known to begin their beach search outrageously early, on account of the sad fact that most of the good beaches will already have been taken. Neighbours are unpredictable. Some will be polite and unobtrusive, while others will insist on setting off fireworks, playing stereos full-blast, and riding waverunners dangerously close to swimmers. The situation is worsened by the current high water level, due to which the majority of previously desirable beaches now lie under a good thirty feet of water.

Following a good night's sleep (preferably outdoors, on top of the boat), a pressing decision needs to be made... will the houseboat remain at the same beach for an additional day, or will the vacationers pull up anchor and search for something different, better, or more secluded, always at the risk of coming up dry? No pun intended.

After beaching, the boaters are free to do with their free time as they wish. The more adventurous types will likely go hiking or water-skiing, while others may just swim, sit on the beach, or read. The scenery is fantastic, and despite the ever-growing numbers of boats, it is relatively secluded. The night sky is darker and clearer than anything that the run of the mill city-dweller has ever imagined, and a boon for astronomers (though a telescope is a hassle to bring). Countless hours can be spent staring at the sky watching for shooting stars.

The abduction and consumption of unwitting sea life is extremely popular on Lake Powell. Leftover blocks of Cheddar cheese can often outperform the most expensive lures in attracting marine life. Along with the numerous other tasty species, carp abound, especially near to the docks. One can never derive too much enjoyment from feeding ice cream to the carp and watching it re-emerge from their gills. A lucky visitor may spot a fox or a field mouse, and the mating call of frogs can occasionally be heard in the distance.

The lake is full of canyons to explore, advisably with a small boat. At each corner, the skipper must decide if the passage is wide enough for the dinky craft to fit through, often to find an enormous houseboat that has already somehow squeezed its way in. Driftwood can be a problem in the far reaches of canyons, and is capable of administering a nasty dent to a boat propeller.

What first trip to Lake Powell would be complete without a trek up to the world's largest freestanding natural bridge? Rainbow Bridge National Monument is a sight to see, and is much easier to access with the current high water level. A simple 10-minute hike takes the visitor near the base of the rock formation, at which tourists are subconsciously compelled to take photographs.

The Joys of Houseboating

The unwary first-timer may experience an unexpected flooding of the boat if he steers too near a passing tour boat, whose wakes seem to rival ocean swells. A near miss with such wakes is sure to set a few chairs, sandals, or inflatables free to do as they please out in the open channel.

Insects are numerous on the lake, especially in backwater areas. Where there are insects, there are bats, and many enjoy watching them (and fooling with their radar). Enormous wasp-beast insects are often found and can scare living daylights out of most younger visitors. Snakes are supposedly present, yet rarely seen.

The septic system must be periodically emptied at designated stations. Fresh water must be refilled periodically. Lake water can be used in the shower and sinks, after which it is redeposited in the lake underneath the boat. For this reason, it is advisable to not spend too much time at any one location.

Weather at Lake Powell in the summer is generally extremely pleasant. Local weather reports often warn of thunderstorms, but the claims are usually unfounded. If a thunderstorm happens to come your way, batten down the hatches, and prepare for a wild ride; if your anchors are not tightly secured, high winds can blow the houseboat out into the open channel. Any unsecured items during a storm may as well be considered on vacation, using the definition given Forrest Gump by his mother. It is inadvisable for a person to stand outside during a thunderstorm, unless he derives joy from recreating the historical meteorological experiments of Benjamin Franklin.

After a week of fun, relaxation, and adventure, the houseboat returns to the marina, and the entire party disembarks. Then comes the delightful task of unloading the boat. Time passes quickly as vacationers vie for one last look, wishing they could stay longer. Although a few may be deterred by bugs and sunburn, the vast majority of visitors consider this a fantastic experience and long to visit again, which of course accounts for the insane overcrowding of late.