The Last Act of Cannibalism in Fiji Content from the guide to life, the universe and everything 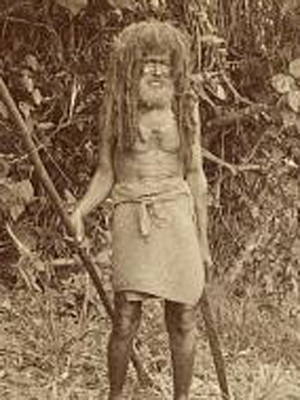 When cultures first meet, they often clash: what to one people is a gesture of friendliness, to another may seem a threat. As the Germans say, 'Other lands, other customs'.

Often these cultural exchanges have tragic consequences. Sometimes the outcome is a salutary lesson in mutual wariness. Occasionally the incident offers... food for thought.

In 1867, the Fijian custom of using one's political enemies as an excuse for a banquet was on its way out. Ironically, the last act of cannibalism in Fiji claimed the lives of an English missionary, the Reverend Thomas Baker of East Sussex, and his accompanying party of Methodist Fijians. The results, however, have been, in the long run, good for everyone concerned - even, one might argue, for the unfortunate entrees themselves.

This is the story of the village of Nabutautau, its place in history, and its journey toward respectability, reconciliation, and international recognition.

The story begins on a Pacific island in the 19th Century.

He preferred to eat the rude. 'Free-range rude', he called them.
- Thomas Harris, Hannibal

On the Fijian islands of Viti Levu and Vanua Levu, eating one's enemies was a time-honoured tradition. Sufficient for the act was a declaration of war. Such declarations were often made in symbolic form, such as by insulting the chief of another tribe.

As we shall see, the Methodist missionary committed such an act - out of ignorance, one presumes.

There are a number of theories on the origins of political cannibalism: the policy's value as a non-nuclear deterrent and the supposed assimilation of the enemy's power by means of physical absorption have been proposed.

Another explanation could be proffered: Not eating one's enemies would be an act of criminal waste in a slash-and-burn culture short on protein.

A Matter of Taste

It's hard in the law to spile a man, I think. It's hard enough to kill him, but it's wery hard to spile him, sir.
- Jerry Cruncher, the Resurrection Man, in Charles Dickens, Tale of Two Cities

It has been asserted by those in a position to know that humans taste good to other humans. While present levels of civilisation have led to the outlawing of cannibalism, many of our ancestors were anthropophagous at one time or another. Although the possible negative side effects of eating one's own species - Creutzfeldt Jakob Disease, for example - were unknown in the past, a general distaste for the practice has set in, as seen by the fact that the more advanced peoples now accuse their neighbours of it.

One unfortunate legacy of cannibalism in the Pacific Rim area is a residual passion for the consumption of spam1. The Hormel Company is well aware that its customer base there is its economic mainstay. Gift boxes of the stuff are available as wedding gifts in South Korea.

According to persistent rumour, the secret to the popularity of tinned pork product is that spam tastes like people. Not for nothing is human meat termed 'long pork'.

Humans: the other white meat.

On a Day in Nabutautau

What though the spicy breezes blow soft o'er Ceylon's isle,
Though ev'ry prospect pleases and only man is vile...
- Reginald Heber, From Greenland's Icy Mountains.

Fiji in 1867 was still an untamed paradise. When the Reverend Thomas Baker and his group of eight Fijian helpers made the arduous trek to the isolated village of Nabutautau, it was with the intention of bringing the blessings of Christianity and Western Civilisation to the unfortunates there, who had nothing but lovely scenery to compensate them for their backwardness.

Our adventurers were, no doubt, steeled against the dangers of encountering wild tribesmen. The missionary's background would have prepared him for the prospect of martyrdom. It was considered part of the price one paid for carrying out The Great Commission.

The hospitable folk at Nabutautau made the journeyers welcome, but after that matters went south rather quickly.

Accounts differ as to whether it was a hat or a comb that the Reverend Baker tried to retrieve, but the fact remains that he touched the chief's head, a totally forbidden act.

The villagers may have regretted what had to be done, but they acted forthrightly. Punishment was swift and condign. The missionary and his war party were dispatched with clubs, and their remains consumed.

By the time the cooking fires had been dampened, there was nothing left of the Reverend Baker but his boots.

The boots had proven too tough even for Nabutautauan teeth.

Lily white man from across the sea,
I'll eat you, or you'll eat me...
- Leonard Wibberley, A Feast of Freedom.

By the 1990s, Fiji offered quite a different prospect from the one which had greeted the Reverend Baker in the 1860s. The world was now a global village. No longer did one eat one's neighbours - at least, physically. Now one competed economically. Globalisation was the watchword.

The people of Nabutautau village watched in helpless puzzlement as the rest of their country acquired the accoutrements of modern life - roads, electricity, coveted schools - while they remained as isolated a backwater as if they were in the wilds of Scotland. Why were they being left out when it came time to distribute the manna of the cargo cult?

The answer came to them: They were cursed. Cursed because, alone of all Fijians, their village had eaten a missionary.

The children should not be allowed to suffer. Something must be done. The first two attempts at exorcism failed - the wished-for civilisation did not materialise. The third time had to be the charm.

Finally, in 2003, the miracle happened: 600 people, including 10 of the Reverend Baker's descendants from Australia, attended the ceremony which turned the tide in Nabutautau.

Let us show pride and honour our nation
Where righteous people reside
Where prosperity and fellowship may persevere
Abandon deeds that are immoral..
– translation of the Fijian words to the Fijian National Anthem, God Bless Fiji, sung to the tune of the hymn Beulah Land

The ten descendants of the Reverend Baker, along with Methodist pastor Iumeleki Susu, a descendant of a surviving member of the Baker party, made the five-hour journey by four-wheel drive from the coast to Nabutautau, where they were overwhelmed by the hospitality and friendliness of the natives.

After the traditional drink of kava, a ceremony was performed to ritually break the 'chain of bondage' around the village. Ratu, or chief, Filimoni Nawawabalevu presented the visitors with gifts of whales' teeth, woven mats, and a cow2. It is not recorded to whom the cow was given.

One cannot help feeling that the Reverend Baker and his eight martyr colleagues are looking down from heaven in approval. After all, their intention in going to Nabutautau was to bring enlightenment and civilisation to the people there. In this, by their sacrifice, they have succeeded.

The Reverend Baker's boots, teeth marks and all, are now on display in a Fiji museum, mute testimony to the power of human integrity to overcome the initial setbacks of cultural misunderstanding and to pave the path for progress.

1The eating kind, not the reading kind.2We assume that no one attempted to touch the chief's head.