The Ashes, 2005 - a Snapshot of Sportsmanship Content from the guide to life, the universe and everything 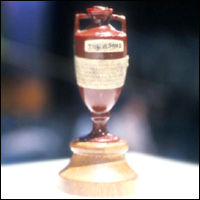 In the Second Ashes Test Match, 2005, Brett Lee came agonisingly close to steering home an Australian win in a match that see-sawed from in the bag to utterly unlikely. Notwithstanding the ups and downs of the first two days, at the start of their 2nd innings, Australia needed 282 with plenty of time to get them. But at one stage, when Gilchrist fell at 136-6, nothing but an England win could result. Then Warne and Lee (who between them had taken all 10 wickets in England's second innings) put on 45 for the ninth wicket until the spinner trod on his stumps, and in came Kasper (career test average 10.59) with 62 to get. England were rattled though and the runs kept coming, and quickly to boot. Fifty required. Then 40, 30, 20, 10, 5, 3. The fate of the Ashes swung on these few runs1.

It is a glorious summer's morning, the sort of day that might have been designed specifically for playing cricket. Amazingly, this day is happening, not somewhere deep in the Caribbean2, but in Birmingham, England.

In the centre of the ground, at one end of the wicket, a batsman is crouching in a state of part-exhaustion and part-despair. Clearly, his team have just lost. A glance at the Thwaite Memorial Scoreboard, at the City End of the ground, shows that the batting team are all out for 279 runs, and that the batsmen at the crease are the lowliest of tail-enders: numbers 10 and 11. The clock above the scoreboard shows that it has not even reached lunchtime.

This sunny day at Edgbaston is, in fact, Sunday 7 August, 2005, and England are playing Australia as part of The Ashes series. The despondent batsman is Australia's number 10, Brett Lee. Is it the loss of his wicket that is causing his pain? Does he feel responsible for losing the match? In fact, as the scoreboard shows, Lee is 'not out'. It is his partner at the other end of the wicket, Michael Kasprowicz, whose wicket is lost and who is already turning to make his way back to the pavilion. Lee has ended the match on 43 not out, a highly respectable score for a non-specialist batsman against some of the world's best bowlers.

Around our crouching batsman, the English players are jubilant. Beating their traditional enemy, Australia, is always sweet. The crowd are also celebrating wildly. At least, that portion not decked out in gold and green is. The Austrialian supporters are uncharacteristically quiet.

The batsman is oblivious to the festivities on and off the field. He just crouches, supporting himself with his bat, reflecting on the course of the match. He is, however, not alone. One English player is conspicuous by his absence from the small crowd of white-shirted men slapping each others' backs. England all-rounder Andrew Flintoff is crouching beside Lee, one hand placed consolingly on his shoulder, the other shaking him warmly by the hand. It is a simple gesture of respect to a fellow professional in recognition of an outstanding performance; it is a word of consolation and encouragement from one fierce competitor to another. In the cynical world of 21st-Century sport, it is perhaps an unusual sight. But then again, cricket still has a chapter of its official rules dedicated to 'fair play'. Perhaps there's hope yet.

1Having lost the first test and won the second, England went on to win the series 2-1, with two matches drawn.2Or 'West Indies', or even 'Windies', as it's known in cricketing circles.