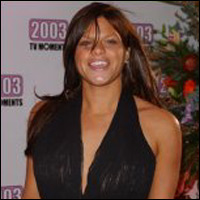 A kind of Princess Di from the wrong side of the tracks.
- Stephen Fry

One of the charges often levelled at Jade was that she was just a normal girl with no trade or practised skills. Well people didn't care and our heroes are not prescribed to us, we have the right to choose them and the people chose Jade. Jade's defining characteristic was her easy warmth that ingenuously enveloped folk.
- Russell Brand

Dental nurse Jade Goody burst onto the public scene in Big Brother 3 in 2002 as a loud and boisterous 21-year-old. Although she didn't win, she played the game well and became one of the most memorable personalities to have entered 'The House'. Love her or hate her, the world of media voyeurism had a new queen.

Following that, her 15 minutes of fame expanded to fill our screens. Jade revealed that her father, Andrew Goody, left the family home when she was just two - he died of a heroin overdose in 2005. Her mother, Jackiey Budden, was also an addict, and due to her mother's many health problems, Jade was to take on the role of 'carer'1 from a very young age. This seriously affected her education. From such inauspicious beginnings it is remarkable to think just how far Jade Goody actually came in her short life.

After leaving Big Brother 3 Jade began to promote herself within the 'celebrity world'. Firstly, she marketed an exercise video with another of the BB contestants. Then, investing her own money - £50,000 - Jade opened a beauty salon called 'Ugly's' in Hertfordshire (unfortunately this closed after just a few short months).

Undeterred, she set about writing a book of all her life experiences. The autobiography2 became a bestseller. She made herself available for magazine and newspaper interviews, and with her new-found business acumen and celebrity managers, Jade became the first BB contestant to achieve a millionaire status in Britain.

Further exploits included nightclub brawls and motoring offences. Whenever Jade appeared in public it was reported, photographed and displayed in glossy magazines to feed her fans' insatiable appetites.

In 2007, Jade created a storm of controversy when she was accused of racism towards Bollywood actress Shilpa Shetty. During a heated row on Celebrity Big Brother Jade called the other woman a 'princess' and 'Shilpa Poppadom'. Also involved in the altercation, which attracted 45,000 complaints to media regulator Ofcom, were fellow contestants, former singer Jo O'Meara, and Danielle Lloyd, a former Playboy model. Jade defended herself by stating that she had lots of black friends and relatives (her father was of mixed race), and therefore denied the allegations. Following her eviction from the programme Jade received hate mail and even death threats, and her public approval rating plummeted.

Chancellor Gordon Brown, then visiting India to promote trade and good relations, found himself embroiled in the political fallout. He ended up making a statement to the press saying he 'wanted to reassure people that Britain prides itself on tolerance and fairness'. Back in the UK, outgoing PM Tony Blair said that he was unable to comment as he had not viewed the programme. Bookshops refused to sell the paperback version of her autobiography and Jade's perfume 'Shh' was removed from the shelves faster than you could say 'piff paff puff'!

For over a year Jade battled to salvage her career. This included charity work and appearances on TV shows like Celebrity Driving School. Jade also visited India and apologised for her behaviour. There she was welcomed and embraced by Shilpa Shetty.

Jade was told that she might have cervical cancer while taking part in Bigg Boss. That's the Indian version of Big Brother; they called her into the Diary Room to be given the news specially. Jade broke down in tears then left the TV show to return home to be reunited with her two sons, Bobby and Freddy. Tests showed she did have cervical cancer and treatment began immediately.

Unfortunately, having a radical hysterectomy did not stop the spread of the disease and while she was taking part in a pantomime Jade collapsed. More tests were undertaken — the cancer had spread to her liver, bowel and groin, and Jade received the news that she was terminally ill. She was determined to stay in the public eye while she fought to stay alive and engaged the services of a publicist — the indomitable Max Clifford. He negotiated deals with Living TV and newspapers and the interest in her plight elicited worldwide attention.

Though criticised for publicising her personal tragedy, Jade says it was all to leave a legacy for her children, who already attend private schools. In 2009 it wouldn't have escaped anyone's notice that Jade was terminally ill. Her doctors said nothing more could be done and her care was now palliative. With her final weeks of life being played out in the media, it seemed that Jade's bald head and huge sad eyes were everywhere you looked.

Jade stated she had not told her children specifically that she was dying, but explained the reason for her hospital visits was because she had 'tadpoles in her tummy'. Arrangements were made for the boys, then aged five and four, to live with their father, Daddy Jeff, as they call him, after they have lost their Mummy. Further arrangements were in for their grandmother Jackiey, and step-father Jack Tweed, to have regular access time with the boys.

In February 2009, 27-year-old Jade Goody began planning her wedding to her fiancé  Jack Tweed. He was released from Wayland Prison in January after serving four months of an 18-month sentence for assault. Jack proposed marriage when doctors told them that Jade's cancer was incurable. Jade, using a laptop in her hospital bed, and with the help of her bridesmaids, threw herself into preparations for her upcoming wedding. Jade also used this time to plan her funeral and write up her will.

OK! magazine bought exclusive rights to photograph the ceremony for £700,0003. Harrods owner Mohammed al-Fayed donated a designer wedding dress. The paparazzi were in attendance to snap the touching moment when the couple chose their wedding rings at Tiffany's. Sir Elton John offered the use of his mansion for a honeymoon. On 18 February Prime Minister Gordon Brown was moved to comment:

It's very sad indeed that the treatment has not been successful. Her determination to help her family is something that we have got to applaud and I wish her family well.

On Sunday, 22 February, Jade and Jack were married. When Jack was released early from jail, conditions were that he wore an electronic tag and observed a curfew of 7pm by returning to his mother's home in Essex. Bridegroom Jack was given special dispensation by Justice Secretary Jack Straw to allow the couple to spend their wedding night together — possibly their most treasured wedding gift of all.

Jade, along with Bobby and Freddy were baptised at her hospital bedside on 8 March, 2009. Days later, in accordance with her wishes, Jade went home to die.

Jade's decision to live out her final few weeks in the public eye will possibly save countless other young women from contracting the same illness. Since Jade was diagnosed, surgeries around the UK have reported an upsurge of requests for cervical smear test appointments. Doctors are calling the phenomenon 'the Jade Goody effect'.

In Northern Ireland, Scotland and Wales, women are tested from the age of 20 years; however, in England, the starting age is 25, which is quite shocking, really. A fitting epitaph to Jade Goody would be to bring that age limit in line with the rest of the UK, so this preventable cancer is caught in time and no-one else dies needlessly.

1Jade's mother Jackiey Budden lost the use of her left arm and the sight in one eye after a motorcycle accident. 2Jade: The Autobiography, was issued in May, 2006.3This amount will go into a trust fund Jade has set up for her sons Bobby and Freddy. No payment is being made to the groom.