Cameron Duncan - Filmmaker Content from the guide to life, the universe and everything 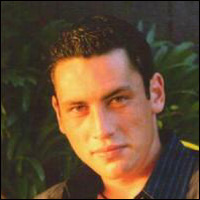 Cameron Duncan was a New Zealand actor, filmmaker and softball player. At the age of 16, he contracted a cancer in his left knee which, after a brief period of remission, spread to his lungs and eventually killed him a little over a year later.

His total celluloid output consisted of just five short films totalling barely 15 minutes, none of which received a cinematic release. And yet he is cited as an inspiration by many, including Oscar-winning director Peter Jackson.

Softball is the game of life to me. There is something about the gracefulness of it all that makes it the greatest game on Earth.
- Cameron Duncan

Duncan was born in April 1986 in New Zealand to Sharon and Rhys Duncan. From an early age, his twin passions were softball and film-making. He would film war movies in parks near his home, using his friends as the cast, and had ambitions of becoming a professional softball player. Duncan won his first Fair Go Secondary School Advertisement Award for a short film he had made on road safety, which went on to become a national safe driving advert in New Zealand (1999). He was again a finalist in 2000 when he produced an anti-smoking advert.

His sporting career ended literally overnight at the age of 16, when on 15 February, 2002 a lump on his knee was diagnosed as an osteosarcoma. Against his doctor's advice, he played a final game of softball the next day before starting treatment which confined him to a wheelchair for much of the time. The chemotherapy treatment he was using was highly painful, and in a later interview Duncan would say 'You wanna jump off a bridge. I'd never do it, but it's that bad.'

Following his diagnosis, he made a short film, DFK6498, a personal reflection on the loss of liberty caused by living with cancer, which granted him some exposure on New Zealand television. In interviews from this time, Duncan comes across as very mature, a quiet and intelligent teenager perhaps slightly star-struck to be involved in the Lord of the Rings films.

Association with Lord of the Rings

When I die it's not me that will be affected. It's the ones I leave behind.
- Cameron Duncan, DFK6498

During the filming of the Lord of the Rings trilogy - which was shot entirely in New Zealand - Duncan came to the attention of director Peter Jackson, who invited him to become involved in an organ donation campaign. Although unaware of the younger man's medical issues, Jackson appreciated Duncan's potential as a filmmaker and also felt a personal connection as both were New Zealanders who had been making films on shoestring budgets since their youth. Jackson seemed equally impressed by Duncan's acting skills and by his ability to create impressive-looking explosions from household chemicals, saying 'I particularly thought his explosions were fantastic, because when I was a kid I tried to do explosions as well. I used to use old fireworks but Cameron had figured out a technique I wish I knew when I was young, which was mixing up household chemicals which will not be discussed here...'.

There were at one point plans for Duncan to make a cameo appearance in Lord of the Rings. Sadly, Duncan's cancer returned at this point and it quickly became obvious that he would not live long. He hastily finished his organ donor advert, Everyday, which won him a second Fair Go Ad Award in 2003 but was not taken up by the NZ Ministry of Health. At this time he also made his final film, Strike Zone, a semi-autobiographical work dealing with a softball coach with a terminal illness. But Duncan's health was declining, and he suffered a punctured lung caused by his illness during filming.

Duncan died in a Texas hospital on 12 November, 2003, and was buried on a hill watching over a park in his homeland in a scene inspired by his death scene from his final film. Peter Jackson gave one of the eulogies at his funeral, and he was buried in a coffin decorated with Batman motifs.

The council in Waitakere proposed that a Cameron Duncan Memorial Prize for Film Excellence be awarded annually from 2004 onwards, but this does not appear to have been taken up. Strike Zone was selected for entry in Hamish McDouall's book, 100 Essential New Zealand Films, due to be published in 2009. A documentary on Duncan entitled An Innocent Young Man is also in the planning stages.

The final scenes of Lord of the Rings: Return of the King have Frodo and Bilbo leaving their homes and friends behind to sail into an Avalon-like paradise in the west. When looking for a melancholy song to feature over the end credits, producer Fran Walsh viewed Strike Zone and wrote the Oscar-winning song Into the West, which she dedicated to Duncan.

Duncan wrote, directed and starred in all his films. Even within such a short oeuvre, he was already finding his unique voice, with dream sequences used in both his non-advert films to make a point about his cancer. In terms of style, they could be regarded as melodramatic, sometimes featuring cheesy dialogue1 - though it could be argued that this is necessary in films of such short duration. In any event, they certainly pack an emotional punch and frequently make intelligent observations on human nature that belie the writer's age.

Four of Duncan's films were incorporated into a documentary for the extended edition of Lord of the Rings: Return of the King, making them available to a wider audience.

Freedom is taking so much for granted when you don't appreciate the small things that you have.
-Cameron Duncan, DFK6498

Nothing that is written about Cameron Duncan is likely to explain why he was (and remains) an inspiration to so many; to understand that, it is necessary to see the films. Several of them are available online, on sites such as YouTube.

1'I want you to pitch the hardest your arm will let you throw the ball; I want you guys to run the fastest and the hardest that your legs will carry you, because if there is one thing that I have learnt for all I've been through - it's that you only regret the things you didn't do. No regrets, guys - not tonight.'