Blue Hoardings Content from the guide to life, the universe and everything 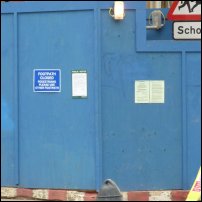 It's not entirely clear when we started to erect them. They just kind of appeared in our towns when we weren't looking. One day they weren't there and the next they were all over it like a rash. A blue rash – the colour of, well, nothing in particular – ten-feet-high Berlin Walls of thick blue-painted plywood surrounding mysterious enclaves of demolition and reconstruction.

To the building industry, hoardings are essential for site security. They may protect passers by from the odd flying brick, but they're really there to keep people out, particularly vandals and thieves. No point in scrawling your disapproval – this particular shade of blue is ideal for painting over graffiti in a single coat.

To most of us they're eyesores. We may not have known about the redevelopment plans before, on day one, the hoardings go up, obliterating the view and leaving us unsure exactly which architectural old friend is being demolished. Sometimes we have to put up with them for months or even years before any construction begins.

We may then be treated to signage advertising a world which we couldn't afford to inhabit:

A luxury development of 5 and 6 bedroom executive townhouses in an exclusive gated community.

Hoardings are not always blue, though. Modern digital imaging technology can now print massive advertisements direct on to plywood. Today, as likely as not, we will be accosted by a commercial panorama of pictorial billboards. A smiling silver-haired couple sips tea as we read of the forthcoming luxury retirement apartments. Large pictures of fruit and vegetables and freshly-baked bread announce the new supermarket. Oh, and In case you were wondering, these printed hoardings are coated with anti-graffiti laminate – solvents will soon wash away your disapproval.

And it's not only the billboards; any scaffolding protruding above the hoardings can now be adorned with further advertising in the form of printed 'building wraps'.

Fencing at the Olympics

At the time of writing, London's 2012 Olympic Park is under construction within an astonishing 11 miles of blue fencing. The wall imagery has reinforced protests from locals, many of whom were forcibly displaced from their homes, allotments and businesses. The Olympic Delivery Authority has since provided a few viewing holes in the plywood, screened with perspex, and has invited schoolchildren to paint some of the panels, but are starting to realise that maybe Londoners should be allowed to see what they're paying for. The blue hoardings are shortly to be replaced by wire fencing. Don't get too close, though, it's charged up to 5,000 volts.