The New Organic: Eating Locally Content from the guide to life, the universe and everything 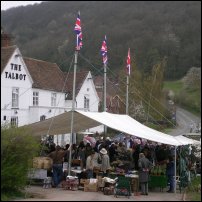 Fresh food is on the agenda more than at any time since World War II, fuelled by an epidemic in obesity, decreasing nutrition, concern about environmentally-related disease and the peak oil issue.

As we near the end of the Noughties there is increasing interest in and support for eating locally-grown food. What was the norm in our grandparents' day is something that is now innovative and requires a change of habits and thought processes. It seems to be peacefully taking over from the organic movement as the most environmentally-friendly way to source our food and the two approaches have an affinity.

The rewards of being a locavore1 are many-fold: for the local economy, the environment, our health and general well-being. Eating locally is beneficial to all of the local community.

There may be benefits to eating locally, but just how easy is it to eat only local food? This question will be addressed by deconstructing a meal eaten by this Researcher: a typical dinner.

The local food movement has similarities with the organic food movement, and indeed many small farmers who sell to local communities operate in an organic manner. They maintain a mixed agricultural and/or horticultural system and use as few chemicals harmful to the environment as possible2. As a result the local environment supports a greater diversity of habitats, some of which are commercial. However, consumers are starting to demand not only good environmental outcomes on an individual level, but are taking the global threats of international consumption into account. Food miles and carbon footprints are now familiar terms, but until the mid-2000s they were still considered to be the jargon of greenies. Thanks to high profile awareness-raising about the links between peak oil, food miles, fresh food and good nutrition we are now making the move from looking after our bodies to looking after our bodies and the environment simultaneously: thanks largely to the likes of ex-Vice President of the USA Al Gore, and celebrity chefs Jamie Oliver and Hugh Fearnley-Whittingstall.

One of the first areas of debate about the disadvantages of the globalisation of food was that of the distance that our beans, fish or wine travel prior to reaching our shopping trolleys. Food miles are still a persuasive reason to buy local3, at a time when it is suspected that the world's oil reserves have passed their peak4 and transport prices are likely to rise continually. On average, food travels 1500 miles5 from the producer to your plate, over a period of about a week. Not only is this expensive in transport terms, but the quality of the food itself is compromised by globetrotting. Natural sugars in raw foods turn to starches and there is shrinkage in plant cells. Having to harvest fruit and vegetables unripe - to enable them to arrive at their destination retail shelves looking attractive - results in reduced flavour, a decline in structural integrity and nutrient levels tailing off. In contrast, fresh fruit and vegetables bought in the local community have probably been harvested in the last 24 hours: they will have the full complement of nutrients and be full of flavour, crisp and sweet.

Thanks to the local food movement benefits are also being felt by communities. Farmers Markets are cropping up all over the western world: there were 2,500 such markets in the USA in 2001 and 5000 in 2006. The markets encourage community development in an atmosphere of shared interest and involvement in the produce that grows in the local waterways, hillsides and paddocks.

Interaction between the grower and consumer allows exchange of information about how food is grown, what is grown and it can even result in shared responsibility for production and planning. In America, there are hundreds of Community Supported Agriculture organisations, where town-based people pay a local farmer an annual fee for a weekly produce supply. In many cases the supporters of CSAs also spend time working on the farms at weekends as a way of learning about food production: the ultimate reconnection.

There is research from the American Medical Association that demonstrates a correlation between the increase in obesity in western societies with the decrease in eating seasonally. Certainly eating locally encourages more seasonality in our consumption of food; as long as our producers are growing according to the seasons and not achieving year-round harvests through the use of artificial lighting and heating in sheds, greenhouses and polytunnels.

The benefits of people buying food from local producers upon the local economy is perhaps the best-researched issue. It has been documented in the USA that for every $100 spent at a local enterprise $45 stays in the local economy, as opposed to only $15 if you buy from a multi-store business. Selling to a big retailer provides most farmers with less than 10% of the retail value of the produce, whereas selling directly to the end-user gives them 100%. The subsequent improvement in farm income and greater financial security has resulted in an unexpected increase in the number of small farms operating commercially and successfully. Small local businesses tend to shop, bank, advertise and employ people within their community.

The impacts upon communities at the other end of the global food chain are not necessarily as favourable: those growing the food that is shipped across the world experience a decline in income as demand drops off. Should food grown overseas be eaten by people in the developed world in order to provide economic support? While the jury is still out on the extent of the impact upon foreign economies and those of the related transport and distribution organisations, it appears that those in the west who can afford to, are choosing to support their own local communities.

How easy is it to eat locally?

The definition of local using the radius of 100 miles is straightforward to apply and the practicality of eating only local food can be assessed by looking at the individual ingredients of this Researcher's typical dinner6. For this example, the meal consists of a cheese flan with vegetables, followed by stewed honey and apples with yoghurt and coffee.

The flan contains locally-produced sweetcorn, onions, peppers, eggs and cheese. Pastry ingredients are from just outside the radius: both the flour and the butter. Imported: the salt and pepper. The kitchen garden produced the accompanying runner beans and courgettes.

Dessert is made using honey from the next town and apples from a tree down the street. And the yoghurt is from the same producer as the cheese. However, what doesn't meet the criterion at all is the South American coffee. The milk that goes with it has also travelled.

Of the 16 dinner ingredients, three come from overseas (coffee, salt, pepper) three are from sources from just beyond the 100-mile radius (milk, butter, flour) and ten are sourced locally. For a greater understanding of an individual family's reliance upon local or non-local food, it would be interesting to deconstruct meals in this way for a week. However, the practicalities of eating locally appear not be so difficult.

Having said that, it is more restrictive than we are used to in these days of accessible all-year-round food. Being a locavore does require a change in habit and a new level of commitment.

It is a movement being given momentum and creating change by consumers voting with their wallets, their feet and their tummies.

1The name dubbed in San Francisco for one who imposes a 100-mile, or 160km radius to their sources of food.2In the form of pesticides, herbicides and fertilisers.3As long as the locally-produced food does not itself require unsustainable amounts of energy, water or other inputs.4According to some assessments.52,400km.6A dedicated foodie.