Che Guevara - Revolutionary Content from the guide to life, the universe and everything 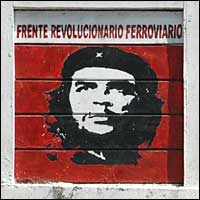 Che was the most complete human being of our age.
- Jean-Paul Sartre1

Ernesto 'Che' Guevara (1928-1967) is the most famous revolutionary fighter of the 20th Century. He was born in Rosario, Argentina in 1928, and received a medical degree from the University of Buenos Aires in 1953. A close associate of Fidel Castro, he played a major role in the fight for Cuba. Since his death Che2 has achieved mythical status; his image is used on T-Shirts, posters, key-rings and even advertising campaigns for vodka.

The Fight for Cuba

The popular forces can win a war against an army, we don't have to wait for the right conditions for a revolution, the insurrection can create them by itself.
- Che

In 1951 Che set off on a motorcycle trek3 with his friend Alberto Granado. In the course of eight months they crossed five countries. During their travels, Che experienced the poverty and disease which pervaded Latin America. Many countries in the continent were ruled by brutal dictatorships, and Che concluded that the citizens were being exploited by the imperialist4 ambitions of the US which appeared to be keen to prop up the dictators for its own ends.

Che was in Guatemala in 1954 when the elected government of Jacobo Arbenz was overthrown in a US-backed operation. He left Guatemala for Mexico, where he joined a group of exiled Cuban revolutionaries seeking to overthrow the dictator Fulgencio Batista. Che met Fidel Castro, and in November 1956 they set out for Cuba to begin the armed struggle.

Che originally served as the medical doctor in the troop, but by July 1957 he had become the first Rebel Army commander. In December 1958 the rebel forces under his leadership were victorious in the battle of Santa Clara. The success of this battle was decisive in leading to their complete triumph on 1 January, 1959.

Our revolution has destroyed the theories of the armchair strategists. We have to bring about a revolution in farming, and fight for change in the fields and the mountains, and then bring the revolution into the cities.
- Che

In the new revolutionary government Guevara was made President of the National Bank. This was a rather ironic position, as Che had a deep disdain for money, which he displayed by signing the new banknotes merely with his nickname. In February 1961 he was made Minister of Industry, in which position he travelled the world as a Cuban ambassador.

Che had a vision of an industrialised and centralised Cuba. He strengthened economic ties with the Soviet Union, which was very happy to have a communist ally so close to the USA. However, the economy faltered and over the next three years he fell into disfavour with his comrades. By 1964 he had become disillusioned with the Soviet Union5, and expressed his desire to spread the revolution to other parts of Latin America and Africa. Other Cuban leaders were instead devoting their time to solving the internal problems of the revolution. This rift led to Che being effectively eliminated from the government.

My peculiar position converted me, all at once, and in an unfamiliar setting, into a soldier, the representative of a foreign power, a trainer of Cuban and Congolese soldiers, a strategist, and a high-flying politician.
- Che

In April 1965 Che left Cuba and travelled to the Congo in Africa, where he spent several months training Congolese rebels in guerrilla warfare. The dictator Mobutu had seized power there following the assassination of Patrice Lumumba. Che assisted the young Laurent Kabila6 in his attempt to force Mobutu from power.

The Congolese revolution was a failure. Che secretly returned to Cuba in July 1966, his presence there known only to trusted allies.

Bolivia - and the End of the Road

You have to take the war to wherever the enemy takes it: to their houses, the places they go to relax... and you have to do it to the limit. You've got to deny them even a moment's peace, a minute's rest when away from his barracks, and even when inside them; you have to attack wherever you can find them, make them feel like a wild animal, hounded wherever it goes.
- Che

In November 1966 Che arrived in Bolivia. He set up a guerrilla force fighting the military dictatorship of Barrientos. Several skirmishes took place in the following months, until the Bolivian army captured him on 8 October 1967. On the next day, he was executed.

Che's body was 'disappeared'; the Bolivian government hoped that the Che myth would fade. Their hopes were dashed as Che's 'martyrdom' established him firmly as a 20th Century icon.

If we want to express how we want the men of future generations to be, we must say: Be like Che! If we want to say how we would like our children to be educated, we should say without hesitation: We want them to be educated in the spirit of Che!
- Fidel Castro

In 1997, the body of Che was recovered in Bolivia after Jon Lee Anderson (who was working on Guevara's biography) received information on its whereabouts. The remains were then flown back to Cuba.

Images of Che are today to be found everywhere, from cigarette packets to key-rings. His face has become a symbol of rebellion, and his memory remains a powerful inspiration to oppressed people.

Even more remarkable perhaps is that he is admired by those who (when examined with more than a superficial analysis) hold views that are completely opposed by the thought and deeds of Guevara himself. He was no pacifist, and far from tolerant of the prevailing attitude. As an example of this misappropriation, in 2000 the advertising agency working for Smirnoff vodka used in a campaign the famous photograph of Che taken by Alberto Korda in 1960. Korda had never asserted his copyright on the image before, but decided that this was too much. He declared that Che was a non-drinker, and it was abhorrent that his image should be used to promote sales of alcohol7.

1All quotes in this article can be found in Che - Images of a Revolutionary - Fernando D Garcia, Oscar Sola2Ernesto Guevara earned the nickname Che from his habit of using this term when addressing his friends. Che is Spanish for friend.3Che's diaries from this trek have been published as The Motorcycle Diaries - Ernesto Che Guevara.4I would rather be an illiterate Indian than a North American millionaire. - Che.5This disillusionment was caused not only by a difference of opinion on economics, but also by the Soviet response to the Cuban Missile Crisis. Che was appalled that the Soviets had backed down so readily in the face of John F Kennedy's stance.6In 1997, some 32 years later, Kabila eventually toppled the Mobutu dictatorship7Further details of this story can be found in this article: The Vodka Story.