Newman Passage, Fitzrovia, London Content from the guide to life, the universe and everything 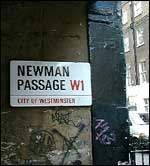 Newman Passage in London's Fitzrovia is an innocuous little pedestrian thoroughfare which links Newman Street to Rathbone Street. Fitzrovia is a very strange area of central London; during the week it is buzzing with TV production teams, editing folk and new media workers. At the weekend, however, the area is dead and most of the restaurants close - very strange for an area which is less than a minute's walk from Oxford Street. The best way to get there is to walk up Tottenham Court Road and take a left on to Percy Street. Once you've reached the end of the road take a right on to Rathbone Street. You will see a pub called the Newman Arms - to the left of this is the entrance to Newman Passage. Although it is small, the passage has carved a name for itself in the annals of British film and culinary history.

Newman Passage is the setting for the first murder in Michael Powell's 1959 film classic Peeping Tom. In the opening sequence, the spectator is shown the scene from the murderer's point of view. The scene opens as we approach Newman Passage at night. To the left of the Passage there is a prostitute who states boldly 'It'll be two quid'. The murderer follows the prostitute down Newman Passage taking in the narrow alleyway and the lady's seamed stockings. The prostitute enters a doorway (now the entrance to the pub) and leads her client upstairs. She starts to undress, removing her ankle bracelet and looks at her client quizzically, then with fear. She screams and is subsequently killed . Roll opening credits.

The Newman Arms is one of those genuine ye olde Englande pubs where you are greeted by the landlord with a hearty 'evening gentlemen'; a welcome which promises a night of great food, great drink and plenty of good cheer. The ground floor has a total surface area of no more than 7m2. The pub has a nautical theme running through it with prints of classic ships and steamers and a scale model of a clipper. The downstairs bar has a homely feel with a soft blue carpet and a well-polished bar, yellowed with the ochre of countless misplaced cigarette butts. The pub keeps regular UK opening hours (11am to 11pm) but is closed on Saturdays and Sundays.

However, the real gem of the Newman Arms is the Pie Room on the first floor. If you are looking for nouvelle cuisine, go elsewhere. This restaurant, serving only pies (the only exception to this is the steak and kidney pudding which has pastry made from suet) is a true Mecca for those looking for great British pub grub. The restaurant only seats 35 people and serves food between 12 - 3pm. You should try and book if you can as the restaurant is always full. If you don't, be prepared for about a 45-minute wait. The restaurant has been recommended several times by Egon Ronay1 and serves such tasty fillings as chicken, leek and ham, steak and kidney, lamb and rosemary and the British staple, beef and ale, all topped with a delicate puff pastry, served with buttered new potatoes and blanched vegetables.

The desserts on offer are also staple British fodder - suet puddings and jam sponges with lashings of custard or cream - your arteries will sag under the strain of excess cholesterol. For a pie and a pint of beer you should expect to pay around £10.

Newman Passage is one of the corners of London that could easily be overlooked in favour of the more important tourist attractions but there is enough here for two minutes sightseeing and a long leisurely lunch.

1Egon Ronay is a respected food critic whose guide to restaurants are independent, honest and accept no revenue from advertisements.