Kath and Kim - The TV Series Content from the guide to life, the universe and everything 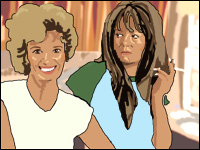 The Australian TV comedy series Kath and Kim centres around Kath, a retired empty-nester1, and her daughter Kimberley. Set in Melbourne, Australia, the series is a satire of the Australian suburban housewife stereotype, mining the same rich vein of humour made popular by Australian films such as Muriel's Wedding and The Castle. Much of the action is shot on handheld camera, and there is no studio audience or laugh track.

The characters were created by Jane Turner and Gina Riley2, two veterans of Australian comedy. Kath and Kim first appeared in the sketch show Big Girl's Blouse, in which Magda Szubanski, the star of such internationally renowned films as Babe, also appeared.

Apart from the usual hijinks, escapades and misunderstandings expertly timed to thirty minutes, much of the humour in Kath and Kim relies on exaggerations of the Australian accent — hence the catchphrase Look at mooiye, Kimmy, look at mooiye, ploise! or Kim's lament about her lack of financial security:

KIM: I wanna be effluent, mum, effluent!
KATH: You are effluent, Kim!

The first season, comprising eight half-hour episodes, was aired in 2002 on the Australian ABC network with the tagline 'Suburban Nightmares Living the Suburban Dream.' The series was an immediate hit (much to the network's surprise3), and the show's catchphrases started to seep into Australian popular culture. Seasons two and three aired in 2003 and 2004 respectively. Starting in 2005, the first series aired on BBC2.

A forty-something, (formerly) single mother who likes to keep herself trim with a 'bit of huffy-puffy' every now and then. She is very pleased with her life and herself, and has trouble getting her stubborn daughter Kim to do what she wants. Kath was married to her fiancée, Kel Knight, in the last episode of Season One, and ended up in traction with a plate in her head and one leg shorter than the other as a result of her disastrous fairy-tale wedding.

Kath's twenty-something daughter, stubborn, 'the size of a house and a pain in the proverbial.' She loves her food, especially Tiny Teddies4, which she considers diet food because of their size. She has a husband, Brett, and loves to watch reruns of The Weakest Link and go shopping. Gina Riley, who also sings the theme song, plays Kim, who as Season One opens is working in a call centre. She has considered a myriad of diets, including the Ozone Diet — in which you eat nothing but air for two weeks and then red meat for two weeks — and Celine Cuisine, based on the exact diet of Celine Dion, but eventually decided to lose weight the old-fashioned way: laxatives and smokes. One of those people whose glass of Bailey's Irish Cream is always half empty.

The second-best friend of Kim and an avid sports fan. Sharon is a hypochondriac being treated with a broad-spectrum placebo and enters each episode with a different injury. She is allergic to cream and the antibiotics used to treat her allergies. Sharon is, as Kim says, one of those people who you make you feel better just by being around . . . by comparison.

The husband of Kath, and a purveyor of fine meats. He believes he is a fit and virile hunk o' spunk, although he's been left at the altar four times. He never goes anywhere without his man-bag, and loves Barbra Streisand music.

Kim's husband. He is totally devoted to Kim despite the fact that she often plays the 'ice maiden' with him. Kath thinks he's the bee's knees. Brett loves it when Kim's a bitch to him and so does she.

Having experienced marriage problems, Kim returns home at the beginning of the first series and begins to complicate the life of her mother, who has begun to date Kel Knight, a 'purveyor of fine meats'. The first season's plot was based around the engagement of Kath to Kel and preparations for their dream wedding. Kim, meanwhile, is alternately attempting to stalk her husband and give him the 'ice maiden treatment.'

This season opens with Kath still in plaster from the aftermath of her dream wedding and Kim blaming her marital problems on not having had the chance to sow her rolled oats. Things rapidly improve, however (or, depending on your view of Kim, worsen), when Brett does some sowing of his own and Kim becomes pregnant, leading to her finally leaving her mother's home. By the end of the series we see Kim in labour with what turns out to be a daughter, duly named Epponnee Rae. But a cliffhanger ending is in order for Kath, as she discovers she's not quite as divorced (or for that matter, remarried) as she thinks she is...

Events continue as Kath and Kel look for friends their own age, Sharon puts the eyes on Brett, Kim lands back at Kath's when financial situations take a turn for the worse, and Brett has great sales success with Epponee Rae as an accessory, but Kim doesn't have so much luck getting the poor baby into advertising. The finale of this series is memorable for the guest appearance of Kylie Minogue5, who plays a grown up Epponnee Raelene Sharlene Kathleen Darleen Craig in a dream sequence.

1A parent whose children have grown up and left home. Unfortunately for Kath, this situation is by no means irreversible.2 The same women who play Kath and Kim, respectively.3There were initially some moves to leave the first series 'on the shelf' at the network. One executive was worried by the first episode's content (essentially half an hour of Kath and Kim shouting at each other).4Brown biscuits made, perhaps unsurprisingly, in the shape of very small teddy bears.5You know. Charlene from Neighbours.