Be'er Sheva, Israel Content from the guide to life, the universe and everything 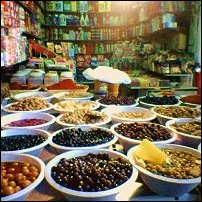 Be'er Sheva (also known as Beersheba or Beer-Sheba) is the fourth largest city in Israel. As it is the largest and most successful city in Israel's southern desert, as well as the home of the Ben Gurion University of the Negev, it is known as 'The Capital of the Negev'. Somehow, Be'er Sheva manages to retain its flavour as both one of the oldest inhabited cities in the world, and a modern up-to-date metropolis.

Be'er Sheva's history reaches back to the Chalcolithic age1 when it was inhabited by a highly-gifted agricultural people who first lived in subterranean dwellings. Excavations have revealed their jewellery, pottery, basketwork and ornaments - all fashioned by skilled craftsmen.

For the most part though, Be'er Sheva is associated with the Jewish patriarchs Abraham and Isaac, who gave it its name.

There is minor confusion as to the meaning of the name Be'er Sheva. Some suggest it means 'Seven Wells'- ('be'er' meaning 'well', 'sheva' meaning 'seventh')- named after one of the wells Isaac dug there. Others say it means 'The Well of the Oath', ('shvua' means 'oath'), after the treaty Abraham made there with the local king. Actually, both interpretations are correct, as both Abraham and Isaac individually gave the same city the two similar names.

When the Israelites conquered the land from the Canaanites, they allotted Be'er Sheva to the tribe of Simeon. At that point it was the most southern permanent place of habitation in the country, leading to the biblical phrase, 'From Dan to Be'er Sheva' which was used to describe all of the inhabited Land of Israel at the time. Further south was the domain of nomadic shepherds.

Until 1900, Be'er Sheva was just a watering hole for Bedouin tribes. Then the Ottoman regime, hoping to encourage the Bedouins to settle down and make themselves easier to rule, built an administrative town on the site of modern day Be'er Sheva. The Ottoman town, although not very old, is still known as the Old City of Be'er Sheva.

During World War I, the Germans connected it to the Sinai peninsula with a railway. In 1917 Be'er Sheva fell to General Allenby and came under British control. By 1948 its population had reached around 3,000. During the Israeli War of Independence, the Egyptians strongly defended the town, but the Israelis captured it in 'Operation Ten Plagues'2 on 21 October. Since then, Be'er Sheva's population has grown to over 170,000 inhabitants. In the early years of the state of Israel it was a frontier town, and retains a bit of that 'Wild West' flavour today. Its population is mostly made up of recent immigrants (from Russia, Ethiopia and various other corners of the globe) as well as native Israelis and Bedouins.

While not particularly old, the Old City of Be'er Sheva still retains a distinctive flavour that sets it apart from the rest of the town. Low, dusty coloured buildings with inner courtyards and narrow alleyways differentiate it from the sleekly modern architecture in much of the rest of the city.

There are several things to see in the Old City. You can just wander through the streets enjoying the desert-style buildings, visit the small shops selling everything imaginable, or eat in a restaurant serving native cuisine like hummus (mashed chickpeas) and falafel (deep fried balls of mostly ground chickpeas). You can also visit the former Governor's House.

The house was built in 1906 by the Ottoman government. It has two floors. The first was the governor's reception hall and the second floor contained his living quarters. Each floor had a separate entrance. From 1938 to 1948 the building served as a girls' school. Today it is part of the Negev Museum, along with a former mosque.

The centre of the Old City's commercial area was converted into a pedestrian mall. The centrepiece of the mall is a model of Abraham's Well. On Fridays the mall is crowded with stalls selling everything from pottery to paintings to jewellery to toys.

Near a small seasonal stream known as Nahal Be'er Sheva (Be'er Sheva stream) there are two ancient wells that, as far back as they can recall, the Bedouins have used to water their flocks. The wells are indeed very old. Whether they are old enough to have been dug by Abraham is unsure. One of the wells has a working mechanism for pumping out the water and transferring it to a trough where animals and people can easily access it. Outside the complex built around the well is an ancient conifer tree which some say is the 'Eshel' that Abraham planted in Be'er Sheva. Although the tree is indeed old, it is far less likely than the wells to have been a contemporary of Abraham.

Tel Sheva and the Brigade Memorial

To the north-east of Be'er Sheva lies Tel Sheva - the site of excavations of ancient Be'er Sheva, from the Byzantine era. Many of the artefacts discovered are on display at the site.

Also north-east of Be'er Sheva is the Negev Brigade Memorial. A landmark in cement sculpture, the memorial combines intricate and symbolic individual components to create an interactive memorial that represents the courage and heroism of the Negev Brigade which successfully defended Be'er Sheva against the Egyptians in the War of Independence. It was sculpted by Dani Caravan, a noted artist.

'Shuk' is the Hebrew word for market. The Be'er Sheva shuk is a series of intersecting covered alleyways where stall vendors hawk their wares. Competition is fierce, and bargaining expected. The shuk is frequented by representatives of all of Be'er Sheva's diverse population, so you are likely to meet Ethiopians in their flowing white robes, Bedouins in their caftans and kaffiyehs, as well as recent immigrants of various nationalities.

Thursday is 'Open Shuk', which means anyone can sell their wares there, without renting space. You can find people selling everything under the sun, and there is camel trading in the morning as well. On Fridays there are buckets of freshly-cut flowers. Every day fruits and vegetables, many grown locally, can be bought, as well as whole chickens, all cuts of meat, fish, spices and pickled foods. You can also find inedible items such as clothing, electronics, and household supplies. Just wandering through the alleys, each with different sights, sounds, smells, and people can be an interesting and unpredictable experience.

In 1982 the Israeli government airlifted Ethiopian Jewry out of North Africa, bringing them to modern Israel. Many of the new immigrants settled in Be'er Sheva, where the Ethiopian community currently numbers over 10,000. They recently built themselves a community centre whose conical roof is reminiscent of the villages back in Ethiopia.

The outer neighbourhoods and settlements are predominantly Bedouin. Many of the native Bedouin Arabs have settled down here in order to retain their right to the land. Their settlements are at various stages of transition from nomadic tents to tin shacks to more typical white stone bungalows. Some of the houses have a tent in the yard for those of the family who still get claustrophobic living within walls that don't move. The Bedouins tend to have large herds of sheep, goats and camels which you can see at pasture as you approach Be'er Sheva from any direction.

Be'er Sheva itself is not located near any beaches or mountain ranges. It is located in a harsh and stony desert, which contains some beautiful canyons and remains of ancient civilisations. Like the rest of Israel, the area around Be'er Sheva contains many well-marked trails. A hike near Be'er Sheva contains all the elements of a good outing, combining harsh and beautiful scenery, ancient ruins, and a possible meeting with one of the local Bedouin tribes or their herds of sheep, goats, or camels. Anyone choosing to hike in the desert there should make sure to bring a lot of water and wear a hat.

If your interests lie in a military direction, then head a short bit north of Be'er Sheva to Hatzerim, where the Israeli Airforce Museum is located. The museum contains the history and exploits of the IAF, as well as some actual IAF (Israeli Air Force) aeroplanes that children can climb around in.

1 A prehistoric age of minor significance spanning, approximately, the years 3900 - 2500BC between the Neolithic and Bronze ages. It was characterised by human use of copper and stone tools. 2By 15 October in the 1948 Arab-Israeli conflict, the Israelis had managed to make large territorial gains in the north of Israel, but the southern Negev desert, which had been allotted to them in the 1947 Partition Plan, was still under Egyptian rule. Therefore, under the pretext of retaliating for an assault on a convoy to a southern settlement, the Israeli government launched 'Operation Ten Plagues', also known as 'Operation Yoav'. Three brigades headed by Commander Yigal Allon successfully drove a wedge between the Egyptian forces that were along the coast, and those along the main southern highway, thereby weakening them, and ultimately conquering the entire Negev.