Cat Collars Content from the guide to life, the universe and everything 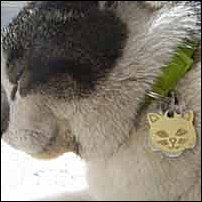 The average cat collar is a small band of material which fixes together to form a loop around the neck of a domestic animal of the feline variety. There are collars for other animals, most notably the domesticated dog, but the purpose of this item is somewhat different to that of the cat. Both are intended as a means of control, but for the dog this is a matter of direct control providing a means to attach a lead, while for the cat the control is a matter of property. However, trying to impose control over a cat is rather like playing tiddlywinks in a grease factory.

Cat collars can be purchased from specialist pet shops, most high street supermarkets and can, conceivably, be home-made. However, don't assume for one single moment that the cat is going to give a flying fruitcake where you got it from.

As has been stated, one of the primary intentions of the collar is to exert control in the form of property. A cat wearing a collar is identifiable as one that belongs to a specific individual. This, from a cat's point of view, is a load of bunkum. A cat doesn't belong to anyone and will continue to visit neighbours1 to beg for food, find somewhere warm to sleep and receive offerings of nibbles, catnip and small, tinkly plastic balls.

A secondary purpose behind collaring a cat is to treat and cure infestations. Most common fleas are usually responsible for this, though ear mites or belligerent larvae may also be an irritation that can plague the domestic cat. The collar is lined with a medicated band and some form of medication is regularly applied to the interior surface so that it then transfers steadily into the cat's fur and is spread by way of the cat's general cleaning habits. Fleas are an intermediate host for tapeworms, and their larvae are annoying and uncomfortable for cats. Young or old cats can die from anaemia if they have too many fleas. Therefore this is actually an instance where the cat has a common interest with humanity in getting rid of the problem, but the ideal method is something fast and painless and certainly doesn't involve wearing a collar.

The key aim of the common cat collar is that it should be safe. The last thing anyone wants is for a collar to actually kill the cat, especially when its actual purpose is to cure the cat. The unfortunate thing is that some of the producers and suppliers on the cheaper end of the scale don't seem to realise this.

Common materials for cat collars include:

In an emergency it may be useful to know something about How to Perform Artificial Respiration on Your Cat, especially following a close encounter between an indestructible collar and a ragged branch stump half-way up a tree.

There are a small number of additional accessories that cat owners see fit to attach to their pet's collars. None of these serve any purpose from the cat's point of view except to make the collar even more embarrassing to wear. Accessories are likely to shorten the lifespan of the average collar by several days unless the accessory itself can be dislodged earlier.

The identity tag is normally a circle of metal stamped with the name of the cat. Occasionally the name of the owner and contact details (eg telephone number) may also be included on the reverse of the tag.

As the tag is shiny and dangles from the collar it represents a particularly engaging plaything for its short span of useful existence. The shininess makes it a potential warning for unsuspecting birds and rodents, but not as bad as the bell.

The bell is a hollow sphere of metal with a small metal ball trapped inside and holes to provide the bell effect. Movement of even the stealthiest kind generates a tinkling sound intended to warn potential prey of the stalking menace approaching them.

The fact that the bell ruins one of the cat's primary forms of leisure activity makes it the target for instant removal, usually by rubbing against trees or objects with rough edges like walls, bins or doors. Once detached the bell can be used as a temporary plaything to knock and chase, the usual means by which the owner will find that it has become detached from the collar.

This is a slim plastic box attached to the collar that forms part of an integrated security system allowing pets access through a flap in a door with a sensor keyed to the remote control box. When the collared cat attempts to pass through the door flap the sensor unlocks the flap making it impossible for unwanted animals to get through.

For the cat this is one of the few additions to the collar that has a considerable potential lifespan, but it also represents an almost guaranteed meal ticket for absolutely every other animal in the neighbourhood. As of yet there is no documented proof of cat mugging, but that isn't to say that it doesn't happen.

A variation of the tag, the capsule is a two-part, threaded capsule that screws open to allow a small roll of paper to be inserted inside. The accessory is attached to the collar by way of a small hoop which attaches to another hoop around the material of the collar.

The roll of paper inside the capsule carries extended information regarding the cat's name, diet, owner, owner's address, telephone number, etc. Considering the capsule has a connectivity lifespan of less than three days and is likely to end up dumped anywhere it represents an excellent source of background material for potential burglars. If not found, it might represent an intriguing form of time capsule to be discovered, perhaps, by insectoid archaeologists sometime in the 42nd Century.

1Anyone gullible within a 20 mile radius.