VeggieTales Content from the guide to life, the universe and everything 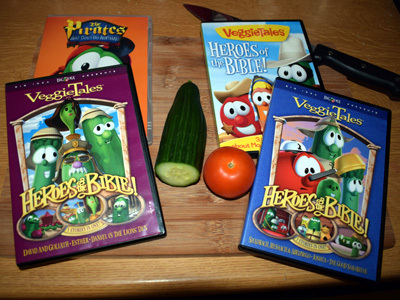 If you like to talk to tomatoes...
If a squash can make you smile...
If you like to waltz with potatoes
Up and down the produce aisle...
Have we got a show for you!

So begins the half hour of good-natured insanity that is VeggieTales. A computer-animated cartoon from Big Idea Productions, VeggieTales brings 'Sunday morning values, Saturday morning fun' to audiences everywhere. A typical episode consists of two short stories, which convey related morals (one of which is always loosely based on a Bible passage), and a segment called 'Silly Songs with Larry1' which provides a little comic relief.

The cast of VeggieTales consists of quite a variety of fruits and vegetables. Originally this decision was made because of the vegetables' lack of arms made the characters easier to render on computers. In turn, the veggies play various roles within the stories in each episode. Here are some of the more frequently-appearing members of kingdom Plantae:

Head honcho on the kitchen counter, Bob plays the straight man to Larry. Bob introduces and closes the show and provides most of the moral messages. Bob is voiced by Phil Vischer, co-founder of Big Idea.

A wacky green fellow with a bit of a lisp and wonderful singer of silly songs. Larry is voiced by Mike Nawrocki, co-founder of Big Idea.

A cute little fella, Junior is the hapless hero of many of the stories. He is intended to be the character with which the children can identify. He has an unspeakably adorable voice, which is provided by the talents of Lisa Vischer, Phil's wife.

Archibald is an upstanding British chap, who serves as narrator for many segments, including Silly Songs with Larry. No known relation to Junior.

Laura is one of Junior's best friends. Laura's parents are rather well-rendered full-grown carrots, though, of course, Laura and her siblings are baby carrots.

A ravenous singing duo appearing in several roles throughout the videos. Frequently seen having disputes over which of them could eat a larger object.

The French peas are indubitably derived from a certain scene in a Monty Python movie. Why else would they have those outrageous accents?

VeggieTales has, to date, been released direct-to-video. The following tapes are available in stores everywhere:

1This is the part of the show where Larry comes out and sings a silly song.