Santiago de Compostela, Galicia, Spain Content from the guide to life, the universe and everything 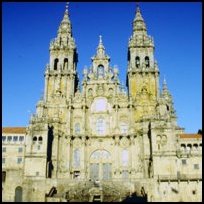 Santiago de Compostela, named the European City of Culture for the year 2000, is located in the north west region of Spain.

Santiago1 is supposedly the final resting place of Jesus Christ's Apostle James, the brother of John. His remains are said to be kept under the altar in the crypt of the cathedral.

Santiago is also only a few miles inland from the Atlantic coast of mainland Europe, so prior to Christopher Columbus's voyage of 1490, it was considered the edge of the known world. Also, as the most low lying land on that stretch of coast, it took on added significance.

Since the 11th Century, Santiago has been the ideal ending spot for a Pilgrimage. People would walk for months to finally arrive at the great church in the main square to pay homage, and many a pilgrim has laid their hands on the pillar just inside the doorway to rest their weary bones. So many, in fact, that a groove has been worn in the stone.

At the front of the baroque cathedral, a golden mollusc shell adorns the altar. A steady stream of pilgrims still queue there to kiss the shell, as another sign of homage.

The cathedral fronts on to the main Plaza of the old and preserved city. Across the square is the Galician parliament building and on the right from the cathedral steps is a hotel.

Santiago also has a fine university which can be seen best from an alcove in the large municipal park in the centre of the city. Within the old town there are many narrow winding streets full of historic buildings. The new town all around it has less character though some of the older parts of the new town have some great big apartments in them.

1Santiago is Spanish for St James.