Mysteries of the Telephone Explained Content from the guide to life, the universe and everything 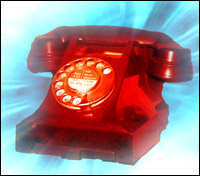 The telephone is a piece of advanced technology which is familiar to all, at least in the developed world. But there are few little peculiarities that seem like a mystery to modern humanity. Why is 0 beside 7, 8 and 9 rather than beside 1 where it should be? Where did the word 'dialling' come from? Why is the emergency number 911 in the United States, although it is 999 in the UK? And can you really use the phone as a defibrillator in a medical emergency?

All these mysteries can be explained by the design of the original rotary dial phone.

Invented in the 1890s, this type of phone was familiar to all a few decades ago, but it is now only a distant memory1. On the front of the phone was a circular device called the dial (or dialer in the US). The word 'dial' at that time meant the face of a clock, which was itself normally circular. The circular thing on the phone looked like a clock dial, so it came to be called a dial as well. Using the device came to be known as 'dialling' and so 'to dial a number' entered the English language. We still talk about dialling numbers, although phones these days all use keypads.

The dial had ten holes in it which were numbered 1, 2 ... 9, 0. Each hole was big enough to take the end of your finger. You operated the dial by placing your finger in the appropriate hole and turning the dial clockwise until your finger struck against a curved piece of metal called the 'finger stop'. You then removed your finger and released the dial. The dial was spring-loaded. It turned anticlockwise, returning to its starting position at a fixed rate controlled by an internal mechanism. As it turned, it opened a contact which sent a series of pulses along the phone line. If you dialled a 1, it sent one pulse. If you dialled a 9, it sent nine pulses. These pulses were interpreted by the telephone exchange as the number being dialled.

Some other countries adopted different systems - in Sweden, a 0 sent one pulse, a 1 sent two pulses and so on up to a 9 sending ten pulses. The digits were arranged on the dial with 0 beside 1.

Dialling was a slow business. It took more than a second for the dial to turn all the way from 9 back to the starting position. But lower digits were faster, because the dial had less distance to travel. So 9s took considerably longer to dial than 1s.

The Emergency number was originally 999 in the UK, the US and many other places in the world. Somebody in the United States noticed that 999 was almost the slowest number of all to dial. They proposed that it should be changed to 911, because the two 1's were much faster to dial; the initial 9 was kept the same. This proposal was accepted in the US, but not in the UK (The number 112 is now the standard Emergency number in most countries in the European Union, including the UK, but 999 still works in the UK).

Of course in these days of push button phones, all numbers can be dialled equally quickly, but the Americans do not see this as a reason to change back to 999.

The first push button phones pretended to be rotary dial phones; they generated strings of pulses on the line. These were soon replaced by the system which is in use in most places today - tone dialling. Each button on the keypad produces a beep which, if you listen carefully, can be identified as two notes of different pitches played at the same time. Each button has a different combination of pitches, so the telephone exchange can tell which buttons have been pressed. Tone dialling is much faster than pulse dialling. A seven digit number can be dialled in about a second.

Tone dialling also allows that scourge of the phone user, automated assistance. You know the sort of thing, 'For Sales, press 1. For Business Callers, press 2. For various other options which don't match what you're ringing about, press 3.' and so on. In all of these, the tones generated by your phone are no longer being used for dialling, they are passed directly to a computer system at the receiving end which processes your request and eventually, with a lot of patience, tells you what you want to know.

Once you have placed your call, the phone at the other end will start to 'ring'. Most of us can still remember the time when phones had an actual bell inside that rang, but in most telephones today, an electronic beeper is used. We still talk about phones ringing, though.

The most miraculous thing of all is the transmission of the human voice over long distances. You speak and a person in a distant land hears. This is of course what gives the phone its name: 'tele' is Greek for 'far' while 'phone' means 'sound'.

When you speak, sound waves travel from your mouth and strike the microphone in the handset. This converts the air vibrations into electrical vibrations. There are a few different types of microphone - the most common one is called a capacitive microphone. There are two parallel metal plates, one fixed and one able to move. When the sound vibrations strike the movable plate, it vibrates. This changes an electrical property of the pair of plates known as capacitance; some clever electronic gadgetry converts this into an electrical signal which is transmitted down the wires until it eventually reaches the speaker in the earpiece of the other telephone. The reverse process occurs here, where a similar set of metal plates are fed with the electrical signal. The movable plate vibrates, generating sound waves which travel into the listener's ear.

When telephones were invented first, nobody knew how to communicate using them. People were used to face-to-face speech. Lacking the visual clues, people couldn't carry on a conversation over the phone. Those days are long gone. We've learned how to provide audible clues to show we are still listening, how to interrupt, how to wrap up a conversation. All of these are skills which had to be invented along with the invention of the phone. This leads to an unsolved mystery: how do I get my teenage daughter off the phone?

The phrase for ending a call is 'hanging up'. This comes from another feature of the early phones. The handset was literally hung from the hook switch. The weight of the handset held the hook switch down when the phone was not being used. Lifting the handset released the switch and started the call. Hanging up the handset ended the call. We still 'hang up' at the end of calls, although we may do so by placing the handset in the phone cradle, or by pressing a button on our mobile phone, an action which is vaguely unsatisfactory to many. There's no better way to end an angry phone call than to slam down the handset.

Why does the lead from the handset to the phone always get so tangled? This one has quite a simple explanation. Many people are right-handed, but prefer to listen to the phone in their left ear. They will naturally pick up the handset in their right hand, but then transfer it to their left hand so that they can listen to it. Finally they put the phone back down with their left hand. This process naturally rotates the handset through 360° and puts a single twist on the lead. When repeated, the lead gets more and more twisted. It responds by tangling around itself, leading ultimately to the ridiculous situation where the handset can't be lifted more than a few inches from the phone - a fact you only discover when there's an urgent phone call.

What can be done about it? By picking up the handset with the same hand that you use to hold it while listening, this problem can be eliminated. If you or other users of your phone are unable to change your habits to this extent, you can always just regularly unwind the phone wire.

Power Goes to Your Head

Normal phones are fed a DC (direct current) supply of 48 volts, which powers all the various bits and pieces. When somebody rings you, a much bigger voltage of about 90V AC (alternating current) is sent down the line. In older phones, this directly activated the hammer which struck the bell ringing the phone. In modern electronic types, the 90V signal is detected and the phone emits an electronically generated warble.

90 volts is lower than mains voltage but it is still high enough to give you a nasty shock, so don't open up your phone while it is connected to the wall, particularly if you are expecting someone to ring you! If you are a dog, don't bite through the telephone cable.

So finally, is there enough power in a phone to use it to restart someone's heart in a medical emergency? This process, known as 'defibrillation', applies a shock to the heart, causing it to go back into its normal state of thumping away at 70 beats per minute. Unfortunately, the voltages in the phone are not high enough. So if you ever see it done on the telly, you'll have to forgive the programme maker and put it down to poetic licence.

1It is still possible to buy 'retro' rotary phones and there are still some old ones around, but they are very rare.