William Hall VC Content from the guide to life, the universe and everything 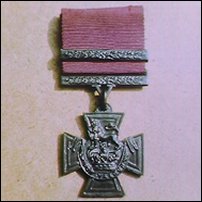 Nowadays we talk about heroes being people who win races, or succeed at sport. Men and women are still dying in the service of their country, but this type of courage and patriotism is no longer worthy of newspaper headlines. This story is of a hero from a different time.

Despite the war between Britain and America, slave ships still maintained their inhuman trade of buying black labour from Arab slave dealers and transporting them to the cotton plantations of the southern states. In 1812, one of these slave-ships was overhauled by the British frigate HMS Leopard and dismasted with chain shot. The captured ship was taken to Halifax, Nova Scotia, where the slaves were set free.

Two of them were taken by a Mr Hall, from the Annapolis Valley, and hired as field hands. They took the name of their employer, married and had three children: a boy and two girls. The couple called the boy William, he was raised free, and educated at Avonport.

William Hall never forgot how his parents came to Canada and from an early age announced his intention to go to sea as soon as he was old enough, travel, and see the world. Therefore, at 17, having completed his schooling, he enlisted in Novia Scotia's Merchant Marine, where he served for 22 years. In February 1852, he found himself ashore in Liverpool, England.

Seeing a recruitment poster, Hall decided to apply to the Royal Navy. The recruiting officer asked why a Nova Scotian had come so far to fight for the Queen. Hall replied that the Royal Navy had saved his parents from a life of slavery, and that he wanted to repay that debt.

Two years later, able-seaman Hall was on HMS Rodney in the Black Sea, during the Crimea War. He volunteered for the Naval Brigade which was formed to provide gun crews during the siege of Sevastapol. The party was led by commander William Peel, third son of Sir Robert Peel1.

On 18 October, 1854, Hall was witness to an event that was to contribute to Peel winning the Victoria Cross, when the two of them were moving ammunition up to the Allied gun batteries. A Russian 42-pounder shell landed among some powder kegs with its fuse still burning. Knowing the shell could explode at any instant, Hall watched as Peel picked it up and hurled it over the parapet, where it exploded harmlessly. Peel would later be involved in a defence of the colours at The Battle of Inkerman. The following year he led a party up the assault ladders and over the walls at Redan, where he was wounded severely.

After the Crimea War, Hall was posted to the frigate HMS Shannon, one of the first propeller-driven steam ships to be used by the Royal Navy. Screw frigates2 of this age still used sails, but mainly to preserve coal on long runs. Here, he once more came under the command of Peel3, who promoted him to captain-of-the-foretop.

In 1857, the Indian Mutiny broke out and many native regiments of the British Army overthrew their officers and rebelled4. HMS Shannon and HMS Pearl were immediately dispatched to Calcutta, India, and a naval brigade was formed under Peel. The guns of the brigade were towed upriver by the steamer Chunar to Allahabad, where they were unshipped and used to form a siege train. Their destination was Lucknow.

At Lucknow, British residents were preparing for a siege and set up a barricade around the residency and Martiniere College5. 3 November, 1857, saw the naval brigade and Seaforth and Sutherland Highlanders at the outskirts of Lucknow. The siege was now in its fourth month.

Peel reported to Sir Colin Cambell, the English commander of the relief force. Cambell knew that the last relief force, after fighting its way into Lucknow, had ended up being unable to escort the estimated 1,300 civilians out of the city, so had joined the besieged forces. Keen to avoid another massacre like the one at Cawnpore, he needed someone who knew the area well enough to guide his forces into the city, along a path that could be defended. In Cawnpore, the colonial administration had surrendered to the rebels in exchange for safe passage to Allahabad. However, due to a mix-up, the departure turned into a battle. After it, the prisoners, including women and children, were hacked to death with cleavers and thrown down a well.

Knowing this, a clerk called Thomas Kavanagh volunteered to try to get the information through to the relief column. Disguised as a sepoy, he was smuggled out of the residency and made his way through the rebel-controlled town to the British lines6.

The relief force now made its way east of the town and crossed the canal. It then besieged the Sikanderabagh, a walled garden occupied by the rebels.

Lucknow was a city of gardens; the word bagh means garden. The English word paradise is taken from the Persian word Pairidaeza, which literally means walled garden. The walls were intended to reflect sunlight and provide shade; the Mughal emperor Babur brought this concept to India.

The guns soon breached the walls and the Highlanders surged through the gap, screaming the war-cry 'Remember Cawnpore!' The soil inside the gardens was turned into a red, bloody mass as the Highlanders and loyal Sikh regiments resorted to the bayonet. However, the next obstacle was made of sterner stuff.

The Shah Nujeef was a walled mosque close to the residency, and was the mausoleum of Ghazi-ud-din Haider. At the start of the siege, the British commissioner in Lucknow, Sir Henry Lawrence, had been urged to blow it up, but he had advised his engineers to 'spare the holy places'. Now it was fortified and heavily defended.

Once again, the guns were brought to bear, but the solid walls withstood the bombardment. At the same time, rifle fire from the mosque and cannon fire from the Kaiserbagh, a walled palace, inflicted heavy casualties on the attackers.

The naval brigade moved its cannon closer, under the cover of rocket fire, but suffered heavy losses - and still the wall withstood the pounding. A Lieutenant Young called for volunteers to take a piece right up to the walls, and Hall was among the volunteers. Under heavy fire, the heavy gun was man-handled forward, until it reached a place of shelter below the angle of the cannons within.

The gun started to pound the wall, but each time it was fired the recoil took it back out into the field of fire and the gunners had to drag it back. Suddenly a grenade exploded by the carriage and only Young and Hall were left fit enough to lay the gun. Between them, they manoeuvred the gun forward until it was only 12 feet from the wall, and fired. A breach was achieved, and the dazed Hall and Young retrieved from the rubble of the wall. Both were to be awarded the Victoria Cross. Indeed, that day saw more Victoria Crosses awarded in a single day than ever before: 24.

Cambell now ordered the gunners to lay siege to the Kaiserbagh. This was a subterfuge, as he did not intend to attack it. Instead, he used the heavy fire to cover his evacuation of the women, children, civilians and wounded from the residency. They were guided out of the city over the next two days, and then the guns were spiked and the rest of the column withdrew.

The evacuees were escorted to Cawnpore, while the rebels were left to hold Lucknow. Cambell returned the next year and defeated them.

Hall remained in the navy until 1876, retiring as a petty officer from HMS Peterel.

Peel was wounded at Lucknow, and picked up smallpox while recuperating at Cawnpore. He did not survive to return to England, but is remembered in a memorial on the front at Southsea, on the Clarence Esplanade, which commemorates the men of the HMS Shannon Naval Brigade.

Hall returned to Avonport in Novia Scotia, where he died in 1904. A memorial was erected in 1946 to this son of a slave who was the first Canadian to win the Victoria Cross. It stands in Hantsport, Novia Scotia.

1Twice British Prime Minister.2The only surviving screw frigate is the Danish Jylland.3Now Captain Peel.4The rebellion was fuelled by a rumour that the musket balls the soldiers had to bite off were greased with a mixture of both beef and pork fat, which would defile both Hindu and Muslim soldiers.5Martiniere College is the only school in the world to hold a battle honour.6Kavanagh was awarded the Victoria Cross for this action.