Tracey Emin - Artist Content from the guide to life, the universe and everything 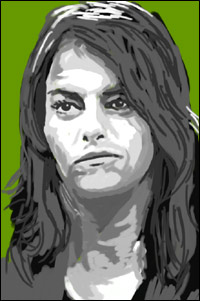 Few British women have greatly influenced the world of art. Fewer still have captured the interest of the public at large. There is probably only one living artist of whom both claims are true. In spite of her fame, Tracey Emin remains an enigma.

Emin's work is raw and highly personal. Much of it depicts aspects of her life, and its content swings between the harrowing and the humorous. She is by common consent the Alpha-Female of the BritArt movement, and she has acquired public notoriety (albeit with a good deal of journalistic assistance) as an unashamed self-publicist with an appetite for gross behaviour. Whatever the verdict on her lifestyle, however, her art is undeniably original, outrageous, prolific and astonishing in its intensity of message, as well as in its range of media and ideas.

Tracey Emin was born in London in 1963, along with her brother Paul. The twins' young lives were difficult. Their mother was an East End girl. Their father was a Turkish Cypriot, married to someone else. For a while, he contributed to the upkeep of the family, but the support did not last. Tracey's outlook has been moulded by childhood hardship, and perhaps also by an absence of authority.

She grew up in Margate on the Kent coast. Although she is reticent about her early life (and much else), it is widely reported that she endured a rape while in her early teens. By the time she began the serious study of art at Maidstone College, it's likely that the persona we perceive today was already in evidence: listless, impulsive and with a self-destructive streak.

In this first period of her work at the beginning of the 1980s, she befriended the artist and musician Billy Childish, and was influenced by his painting. She unconsciously coined the name of a campaigning art movement by deriding his Van Gogh-homage style in the following terms : 'Your paintings are stuck. You are stuck! Stuck! Stuck! Stuck!'. Childish went on to found the Stuckists in collaboration with Charles Thomson (a schoolfriend of Douglas Adams). Emin's outburst, meanwhile, seems consistent with our received notion of her character.

Her accomplishment as a painter secured a place at the Royal College of Art, and she duly received her MA. Her paintings from this period, many of them revealing the influence of Schiele and Munch, exist today only as photographic reproductions. The young Emin was burning candles at both ends. In a state of depression following an abortion, she destroyed most of her early work. In recent times, she has referred to this period of her life as her 'emotional suicide'.

For a while, Tracey Emin turned her back on art altogether. She enrolled at Birkbeck College on a course in philosophy. Friends persuaded her back into the fold, however, and she began to produce designs for sale, including T-shirts and soft furnishings. One outlet was fellow-artist Sarah Lucas' shop in Bethnal Green, and in 1993 she took a job there, doubling as an assistant and a supplier. Pieces from this period, including ashtrays and other diverse objects featuring Damien Hirst's portrait, are now significant collectors' items. Emin would soon meet Jay Jopling, later to become her agent, as well as several of the London gallerists who would bring her to public notice, including Joshua Compston.

By the time of her first solo exhibition, which took place in 1994 at the White Cube Gallery in St James', Tracey Emin had developed a characteristic portfolio. Some of the pieces were extensions of items made for sale, presaging the large-scale embroidered works which would shortly follow. The greater part, though, was essentially a collection of memorabilia, much of it highly personal. As well as a large number of autobiographical photographs, the collection included grotesque curiosities, such as the packet of cigarettes her uncle had been holding when decapitated in a car crash. All of this went into the exhibition, which was entitled My Major Retrospective.

In 1995, Emin produced her first work of enduring fame. Most simply described as an embroidered tent, it displayed1 the names of Everyone I Have Ever Slept With in her life until that time, rendered in coloured threads. As well as sexual partners, it recalled the impoverished circumstances of her early years in its list of family members, and it took on a painfully confessional aspect through the inclusion of the names she gave to her two aborted children. The work was first seen in public as part of the Minky Manky group exhibition at the South London Gallery. The event was organised by Emin's one-time boyfriend Carl Friedman - whose name appeared in the fabric.

Emin was by now well-known in art circles, but the general public were still unaware of her. All that changed through a Channel 4 TV debate, broadcast live in the small hours after the awarding of the 1997 Turner Prize. The theme of the program was The Death of Painting, suggested by the complete absence of canvasses from the prize shortlist and by the already three-year-long streak of conceptual art winners. The participants in the studio discussion included Waldemar Januszczak, Roger Scruton and, of course, Tracey Emin.

Emin may have been selected as a potential iconoclast, given her renowned excitability and her connections with the then-emerging Stuckist cause. In the event, the program's producers were rewarded with an exhibition they could hardly have anticipated. Although she would later attribute her demeanour to painkillers administered to treat a broken finger, Tracey was clearly drunk. After contributing only giggles, spilled cigarette ash and incoherent murmurs for most of the discussion, she finally reacted to the ridicule of the academic panellists by rounding on everyone present. The broadcast ended with Emin declaring that 'no real people' would be watching anyway, before storming off the set to 'be with my friends and my mum'. The newspapers revelled in the spectacle and the bad language. For reasons quite unconnected with her artistic accomplishments, the self-styled 'Mad Tracey from Margate' had become a national celebrity.

Her own contribution to the notoriety of the Turner Prize came two years later. My Bed is now so famous that most people believe that Tracey Emin won the 1999 contest2. In fact, she was only short-listed.

My Bed is literally what its title suggests, a real bed transposed from a domestic setting to an art-space. The bed is no fragrant boudoir, however. It is unmade and cluttered with petty possessions, conveying a sense both of personal refuge and of self-neglect. The contradiction between public revelation and squalid furtiveness is unsettling. Photographs do not really capture the detail that defines the work. The objects littered around it, unnoticed at first, invoke varying degrees of disgust on closer inspection. They include empty vodka bottles, the remnants of dozens of cigarettes, used condoms, discarded tampon applicators and blood-spotted underwear.

Well before Charles Saatchi paid £150,000 at auction for the piece, My Bed had acquired iconic status in the British Art debate. Emin found herself ranked alongside her erstwhile totem, Damien Hirst. Both were vilified by the press, and both sold thousands of newspapers. Nonetheless, a moment's thought shows that the two oeuvres are very different. Whereas Hirst's sectioned carcasses and maggot-ridden cows' heads are dispassionate studies in detachment, Emin's creations are autobiographical. Both artists trade in a mixture of shame and defiance, but in Emin's case, the feelings are personal rather than societal.

'A Massive Sulk' or 'William Blake'?

Now assured of attention in everything she does, Emin has visited many media and reinvented themes from her early work. In film and broadcast media, her notable works include the painstakingly biographical CV (1997) and Top Spot (2004), which portrays teenage life in Margate as recalled by the artist. Emin withdrew the latter film from general cinematic release, after censors imposed an 18 certificate. The BBC has recently aired it, however, complete with a harrowing depiction of a young girl's suicide.

Emin's soft furnishings remain prominent, with quilts and banners featured in installation work, and several examples of collective projects creating modular works to the artist's designs. The embroidered slogans have also been echoed in other media, from neon to poster-form calligraphy. Sometimes the message is petulant and profane, but more often nowadays it is thoughtful and wistful, imbued with wry humour and self-deprecation.

Tracey Emin continues to astonish and appal in equal measure. David Bowie has described her as 'William Blake as a woman, written by Mike Leigh'. Tom Lubbock, writing in the Independent newspaper in 2002, called her work the 'equivalent of a massive sulk'. There is room for both opinions about an artist as intense as this one. Few who make the effort to look beyond the headlines can deny her commitment and basic honesty.

Technical merit is another thing, of course, and beauty is yet another. Objectively speaking, Emin's work is ordinary in terms of the first criterion and a failure in terms of the second. For those who open their minds, though, there is a third criterion, of art as the depiction of life. By that measure, Tracey Emin surely fully deserves her fame.

1Everyone I Have Ever Slept With (1963-95) is described in the past tense because it no longer exists. Along with other important BritArt works in the Saatchi collection, it was destroyed in a warehouse fire in May 2004. Its demise added a further twist to the already bizarre Emin legend.2The misconception is possibly encouraged by the actual winner going by the implausible name of Steve McQueen