Michael Aspel - British Television Presenter Content from the guide to life, the universe and everything 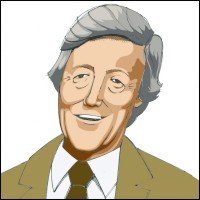 Bar the grey hair, the odd laughter line and the surgical removal of his eye-bags years ago (which he regrets), he still has the sparkle of the young presenter who first hit our screens with Ask Aspel back in 1968.
– The Daily Mirror

Michael Aspel is a well-known television presenter, mainly remembered for being the host of This is Your Life and The Antiques Roadshow. He was awarded an OBE in 1993.

Born on 12 January, 1933, in Battersea, London, Michael Aspel worked as a drainpipe-layer and gardener, and sold advertising space for Western Mail. He also took up jobs at publishing houses, before embarking upon National Service, which lasted from 1951 - 1953. In his words:

National Service was the catalyst that got me to Wales. Before that I was a teaboy in William Collins publishers, in London, serving tea to all these famous authors like Peter Cheyney.

He then took up a job with the David Morgan soft furnishings store in the city of Cardiff, but this was shortlived as he spent most of his time pursuing a job as a radio actor for a children's play on BBC Wales, before landing a job as newsreader for BBC Cardiff in 1957.

I only got into news broadcasting because Richard Baker had a cold one day and I was asked to pop up for that weekend and ended up staying for eight years, until 1968. But that was because it was such bloody good fun with such a wonderful team which made me so thoroughly happy.

At the BBC he was made aware of the importance of pronunciation and of Lord Reith's values1. He presented a number of different programmes such as the series Come Dancing; Crackerjack, a gameshow designed for children; Miss World, a beauty contest, which he covered fourteen times; and Ask Aspel, a children's programme in which memorable bits from other programmes were replayed. Aspel also did some work for ITV, with Aspel and Company, featuring interviews with celebrities from around the world. The show came to an abrupt end, however, when the celebrity Oliver Reed staggered on stage drunk, and celebrities Bruce Willis, Sylvester Stallone and Arnold Schwarzenegger hijacked the show in order to promote the opening of a Planet Hollywood restaurant in London.

This Is Your Life

Aspel's life was featured on the show This is Your Life in 1980. Eight years later, and a year after the death of the show's presenter, Eamonn Andrews, Aspel took over as presenter of the show. During his reign as the man with the red book, he managed to surprise many celebrities: former Archer Brian Aldridge; music judge, Simon Cowell; wildlife presenter and former Goodie, Bill Oddie; and author, Richard Gordon.

Aspel remained as This is Your Life presenter for 15 years.

Although Aspel has been successful in his career, his domestic life has been, in his words, a failure; he has divorced three women, with whom he has had seven children, after feeling trapped and claustrophobic.

I can't shrug off divorce the way people seem to be able to these days. I'm surprised they don't now say, 'Will you be my first wife?', because it's kind of written into the constitution that it's not going to last. But I've always thought that marriage is an excellent thing, and I'm very disappointed in myself that it hasn't worked. I've always had a highly developed sense of guilt.

His first wife Dian Sessions remembers things slightly differently though, saying: 'He was a lovely man but a hopeless hubby. He always had a roving eye. He is driven by sex and ambition.' Aspel currently lives with Irene Clarke, whom he met while working on This Is Your Life, in Surrey. He is unable to be her husband though, as Lizzie Power, his third wife, refuses to divorce him.

Not Just a Straight Face

Although Aspel can be seen as a straight-talking gentleman, he is also happy to take part in humorous programmes with the likes of Morecambe and Wise and the Goodies. One sketch that he did with the Goodies saw him being squashed by a giant cat's paw. This sketch remained memorable in many people's minds, including those of Australian radio presenters who interviewed him after work on filming Antiques Roadshow had finished in their country.

All they wanted to hear about was The Goodies. It was like going to Japan and having to discuss some esoteric thing.

He was also happy for BBC Three to run a spoof documentary on his love life called Sex, Lies And Michael Aspel in 2003. In his words:

The idea was that I'd had about 30 children by famous women like Jan Leeming, Valerie Singleton, Pamela Anderson and Angie Best. We didn't script it and there were clues that it was a spoof, but I got tons of hate mail.

In 2004, Aspel revealed that he had cancer, an illness that his son Greg died of in 1989. Aspel was undergoing a routine check-up, when his doctor diagnosed him with non-Hodgkin lymphoma. He told the BBC: Without that check-up I might not have found out about it at all because there are no symptoms. However, after one dose of chemotherapy, Aspel has refused to take drugs to combat the illness. I was worried that the treatment would be the thing that would make me feel ill. I have a horrible fascination with this disease I live with, but which has not, so far, actually made me feel sick.

In a pretty long and varied career, working on the Antiques Roadshow has been as good as it gets.

After fifteen years of presenting This is Your Life, Aspel was keen to do something new and found Antiques Roadshow a calling. In his words, 'The Antiques Roadshow is literally a national treasure; it's a detective story, a game show and a history lesson.' In total, Aspel took part in 200 shows and marked his last, in 2008, with a look back over its highlights.

I've been in television for 50 years and have a very tidy mind, so it's great to finish on an anniversary and while I am feeling totally fulfilled. I have no immediate plans, but that doesn't mean I won't be back if an interesting project comes along.

1To educate, inform and entertain, without Government interference or commercial pressure.