Japanese Tea Ceremonies Content from the guide to life, the universe and everything 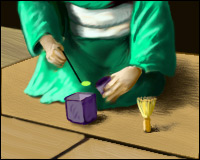 Tea came to Japan from China. The Japanese made an art out of drinking tea. It wasn't just a drink - it was a spiritual quest!

The Japanese tea ceremony (cha no yu - hot water tea or chadou/sadou - the way of tea) can be very elaborate; there are prescribed ways not only of making and drinking the tea, but also of the whole setting where the ceremony is performed. From the gardens and surroundings of the special teahouse itself, the number of tatami mats that determine the size of the room to the decorations used. Even the way that the tea objects are handled before, during, and after use is important. However, there are differences in ceremonies linked to the Japanese tradition and not all insist on exactly the same rites and routines.

An Example of a Japanese Tea Ceremony

Generally, the host invites a few guests to the ceremony. Both the guests and the host have prescribed ways of behaving during the ceremony.

The following is a description of one variation of a Japanese tea ceremony: