Ant and Dec - British Television Presenters Content from the guide to life, the universe and everything 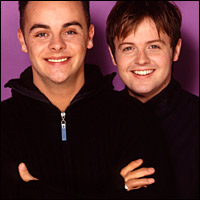 Anthony McPartlin and Declan Donnelly, otherwise known as Ant and Dec, or alternatively PJ and Duncan, gained fame in the children's TV programme Byker Grove and have gone on to become presenters of entertainment television programmes like I'm a Celebrity, Get Me out of Here! and Ant and Dec's Saturday Night Takeaway.

Born on 25 September, 1975, Declan Joseph Oliver Donnelly is the elder of the lads, with Anthony David McPartlin being born on 18 November, 1975. Both support Newcastle United FC and Ant has even been rumoured to sleep in the football team kit. Although Ant and Dec grew up near each other it wasn't until they both appeared in children's TV programme Byker Grove in 1990 that the pair met for the first time.

We didn't particularly like each other at first; I thought he was miserable.
- Dec

However, they grew to like each other and became firm friends. Two memorable incidents in Byker Grove were PJ becoming blind after playing a game of paintball, and PJ and Debbie's love scene, which caused many a parent to write in and criticise the show. PJ and Duncan left Byker Grove in 1993.

Let's Get Ready To Rhumble

On leaving the show the comedy duo presented their first entertainment show, Ant and Dec Unzipped, for Channel Four. Then they released a variety of songs that reached the top 20 in the charts during 1994 to 1996 under the pseudonym PJ (Peter Jenkins) and Duncan, reflective of the children's programme that first brought them fame.

I used to watch Top of the Pops and dream about going on.
- Ant

One of the more recognisable songs that the duo brought to the Top of the Pops stage in 1994 was 'Let's Get Ready To Rhumble', which was Brit Award nominated. This was followed by the songs 'If I Give You My Number' and 'Eternal Love'. None of their songs made it to number one in the UK but 'Eternal Love' hit the top spot in Japan. The lads also released the albums Psyche and Top Katz. Psyche went platinum and reached number four in the album charts. Their final song was the England World Cup song 'We're On The Ball'.

As well as their musical recordings Ant and Dec also appeared in the BBC children's show Gimmie 5. They then went on to star in a BBC comedy sketch show, which was aptly named The Ant and Dec Show in 1995, and appeared on an evening show named Ant and Dec Unzipped for Channel Four in 1997. The BBC then asked the northern duo to present Friends Like These, but they were not asked back to do a further series. A BBC spokesman said:

It is a shame that negotiations with Ant and Dec for another series of Friends Like These next year have broken down. However, we think they are fantastic and the door is always open for them to come back to the BBC.

Ant and Dec weren't off screen long before the BBC's rivals ITV were in talks with the lads about new Saturday morning children's programmes SM:TV Live and CD:UK, which the guys were to front alongside Cat Deeley. Ant and Dec hosted SM:TV Live from 1998 to 2001, rivalling the BBC's Saturday show Live and Kicking. The show SMTV Live became so popular that Channel Four revealed it to be number 27 in the 100 Greatest Children's Television Shows. In the same year that the lads left SM:TV Live the pair hosted the 2001 Brit Awards for ITV.

Because they are rarely seen apart, there is a running joke that people get confused when putting names to their faces. To ease confusion the lads normally stand with Ant on the left and Dec on the right as we see them on camera. Ant is also taller than Dec, which could be easier to remember. They have achieved joint awards such as the Special Recognition Award at the National Television Awards in 2002. Ant and Dec also appeared in a tribute to The Likely Lads in 2002. The Likely Lads was a classic British TV sitcom that for the first time reflected what it was like to live in Tyneside, featuring actors from the region. In a tribute to the programme Ant played 'Terry' and Dec acted out the role of 'Bob' in a remake of the classic 1973 episode 'No Hiding Place'.

When Dec and I first moved to London and shared a flat, we had Likely Lads nights. We've been fans all our lives.
- Ant

That same year, the lads fronted their own family show on ITV called Ant and Dec's Saturday Night Takeaway, which showed people winning prizes, Little Ant and Dec played by James Pallister and Dylan McKenna-Redshaw interviewing celebrities, and famous people driving around an assault course trying to beat the time Ant and Dec set. They were also seen surprising fellow celebrity and judge of Pop Idol Simon Cowell at auditions for the American show on their programme. In 2005, Ant and Dec's Saturday Night Takeaway won the People's Choice at The British Comedy Awards, although they subsequently handed this award back when it was discovered that there had been errors in the voting process.

Get Me Out of Here

I've got a phobia of spiders, there were loads in the hotel so that was pretty scary, I had one in my bathroom and I didn't go in there for two days.
- Ant

Not content in just making Ant and Dec's Saturday Night Takeaway and The Likely Lads in 2002, Ant and Dec also visited Australia and presented I'm a Celebrity, Get Me Out of Here. The show consisted of celebrities retrieving plastic stars during tasks like eating Widgety Grubs and other Australian 'delicacies'1, confronting emus, doing bungee jumps and travelling along a high wire. The stars were then traded in exchange for meals to feed their colleagues in the camp. To add to the stress, the camp is set in the jungle alongside snakes and rats. Their bathroom facilities left a lot to be desired. They also had to search for treasure chests which contained a surprise from another celebrity outside the jungle. Like Ant and Dec's Saturday Night Takeaway, I'm a Celebrity, Get Me Out of Here continues to run at the time of writing (April 2008).

Despite being successful career wise both at home and abroad, work commitments soon took their toll on the boys and their relationships and in 2003 Dec's long-term girlfriend Clare Buckfield who appeared in the programme 2 Point 4 Children split up with Dec for this very reason. Dec's agent commented:

Over the last year, Claire and Dec have spent a lot of time apart due to work commitments. While they remain firm friends, they've decided to part and give themselves time and space. They confirm that no other parties are involved on either side.
- Dec's agent

Meanwhile Ant has had better luck in love and in 2003 was rumoured to be dating Lisa Armstrong, then a member of the pop band Deuce. Ant married make-up artist Lisa at St Nicolas Church, Taplow in July 2006, with Dec performing the role of Best Man.

The Shows Go On

In 2004 Ant and Dec were awarded the prestigious Golden Rose award for their Saturday Night Takeaway show and in 2005 they were given the most popular entertainment presenter category at the National Television Awards. That same year, the television channel ITV celebrated its 50th birthday and to mark this occasion Ant and Dec presented Ant and Dec's Gameshow Marathon, a culmination of gameshows on ITV over the last 50 years. The hosts were played by six different celebrities, one of whom was Vernon Kay.

The year 2006 was very hectic for the guys as they presented their sixth series of I'm a Celebrity, Get Me out of Here! and helped produce yet another series of Ant and Dec's Saturday Night Takeaway. They also had latex puppets made of themselves and their voices imitated by impressionists Jon Culshaw and Phil Cornwell during Best Ever Spitting Image, which reflected on the show's memorable sketches and puppets. They also starred in the film Alien Autopsy, in which they played a couple of men finding an unseen tape of an alien autopsy while visiting America. The film was based upon the 'true-life' Alien Autopsy documentary, which had been a wind-up. The truth did not become known until many hundreds of thousands of DVDs had been sold of the supposed autopsy, making the documentary-makers quite a large sum of money. Finally, the lads found time to present a charity football show called Soccer Aid, a golfing show called All Star Cup and the game show Poker Face, where the contestants have to bluff their way through to winning a million pounds.

In March 2007, Ant and Dec were working on a new gameshow, this time in America. The show, called Wanna Bet?, featured people creating performances and predicting what would happen next. The duo are said to have attracted the American viewers' attention after they'd seen the film Love Actually by Richard Curtis. Later that spring, the comedy duo signed a two-year deal with ITV extending their contract which first began in 2000. Paul Jackson, ITV's director of entertainment and comedy, commented:

Ant and Dec are undoubtedly the nation's favourite TV presenters. To be able to continue working with them exclusively is an absolute delight.

Then Ant and Dec's Saturday Night Takeaway took a blow as the competition lines were reported to have been rigged. The presenters were apologetic and happy to offer refunds to their viewers: if the money wasn't claimed it would go to charity. Despite this the show went on to win the award for best entertainment programme, the presenters were voted best hosts, and won the top reality show award for I'm a Celebrity, Get Me Out of Here!

Early in 2008 it came to light that Ant and Dec were the comedy hosts 'most watched in 2007' according to entertainment agency MPG. Another vote-rigging scandal hit the headlines in May 2008 when it was discovered that the 2005 British Comedy Award should have gone to Catherine Tate, not Ant and Dec. So now the question being asked is will viewers continue watching this duo or switch off? Only time will tell.

1Half the fun of the show is watching Ant and Dec trying not to laugh as participants psyche themselves up to eating unmentionable things like shark penis and kangaroo testicles.