Writing Signs Content from the guide to life, the universe and everything 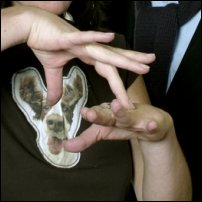 Many forms of signing exist. Sign systems of various forms have been developed among Trappist monks, for children with certain learning disabilities, and for various other reasons. This entry, though, is concerned only with actual signed languages - the natural languages of the world's deaf communities.

These make use of a spatial grammar, which is in many respects quite different to the linear grammar of spoken languages. Signed languages therefore provide a lot of valuable information for researchers examining linguistic universals: which aspects of grammar are common to all languages, and which are peculiar to certain families or modes (spoken, signed, written) of language?

It is hard (perhaps impossible) to study a language without having some way to write it down. You certainly need to annotate examples in published research papers. Signed languages are often glossed into another language: words from a spoken language are written in sign order, and annotations inserted for other aspects of the language, such as head shakes and nods, blinks, direction of 'eyegaze', and indexing (pointing).

Glossing, though, is unsatisfactory for many reasons. The most obvious is that many words do not have a simple one-to-one correspondence between languages, so the spoken-language word chosen to represent a certain sign is to some extent arbitrary. Also, the annotations are not perfect, and cannot represent the bare, unanalysed data. Some interpretation (such as the focus of an index) is done by the person writing the gloss, so the gloss itself is not an unbiased source for other researchers.

Clearly, a system is needed to write the actual signs on paper. Such a system was published in 1960 by William Stokoe, a linguist at Gallaudet University working with American Sign Language (ASL).

In the course of his research, Stokoe created a notation system for writing signs. And Stokoe notation became popular with sign linguists. Although it was created for ASL, it could be adapted for other sign languages. Indeed, Stokoe notation is used in the gigantic Dictionary of British Sign Language1.

Stokoe notation consisted of three elements: the handshape (dez), location (tab) and movement (sig). Symbols for each of these are written in a set order to describe signs. The British Sign Language (BSL) dictionary lists 57 handshapes. It also uses a set of symbols for orientation (ori). The same symbols are used for palm and finger orientation, which is one reason why a strict order of writing the signs is necessary.

Stokoe notation is useful for encoding signs in a dictionary or the study of sign linguistics. But using it to actually write signed languages is near impossible. The symbols cannot be read fluently. Indeed, Karen van Hoek compared Stokoe notation with writing English with all the letters in alphabetical order, with little numbered subscripts to tell the order in which to pronounce them. H2i3s4t1 i1s2 a9b10c3d1e2e7e12h6i4l11p5r8, b1t3u2 a2d4h1l5r3y6 e9i1i5i7n2t3t6u4v8.

Stokoe notation does not encode any information about non-manual features, which includes facial expressions and movements of the head, shoulders and trunk. The introduction to the BSL dictionary lists 46 non-manual features, including 'The eyebrows are raised', 'The eyebrows are furrowed', 'The cheeks are puffed out', 'The lips vibrate', 'The tongue protrudes', 'The tongue tip is held between the lower lip and the bottom teeth', 'The eyegaze is directed down and forwards', 'The eyegaze is directed in line with the movement of the hand', 'The eyes open', 'The eyes close', 'The eyes are closed', and 'The shoulders are hunched'. These are all essential parts of the signs in which they occur3.

Stokoe notation will only take us so far; it is not detailed enough for some researchers. So another method was developed. HamNoSys (or the Hamburg Sign Notation System) is, like Stokoe notation, a linear method of writing signs. It can show wrist orientation in far more detail than Stokoe notation.

The symbols for handshapes are far more iconic than Stokoe's, so they are easier to learn and universally applicable.

HamNoSys was developed by a group of deaf and hearing people at the University of Hamburg, as a research tool. It was first made publicly available in 1989.

Sutton SignWriting is very different to other sign notation systems. For a start, it was created not by a linguist, but a dancer. The US citizen Valerie Sutton was training as a dancer when she created a system to record dance steps; she worked with the Royal Danish Ballet to record historic dance steps which were in danger of being forgotten.

In 1974, a group of sign researchers headed by Lars von der Lieth at the University of Copenhagen came across articles about Sutton DanceWriting. They approached Sutton and asked her to create a similar system for notating signed languages.

She watched hours of sign language videos which she did not understand, so created the first sign notation system which is purely descriptive, and not at all based on underlying grammatical principles. Sutton SignWriting is not a linear method: information about hand orientation, location and shape is all written together. Being the most iconic form of notation, it is also the easiest to learn. It is not, however, as detailed as HamNoSys.

The system was gradually improved over the years, with Sutton always involved.

The other major difference between Sutton's method and the others is that it is very easy to simplify SignWriting slightly to create a writing system. HamNoSys and Stokoe notation are exactly that: notations used by linguists. Sutton SignWriting is also often used by linguists, but can also be used to write letters, newspapers, even, potentially, novels. Being purely physically descriptive - not based on the grammar of handshape - it can also be used to write almost any sign language. And, because it is related to Sutton DanceWriting5, it can be easily expanded for those occasions when a signer gets excited (or starts playing with language, as in poetry or humour) and moves outside the normal constraints of the language to use leg, feet or full body movements.

1At 1,084 pages, it truly is gigantic.2The 'ha' symbol is a small vertical line used as a divider.3Stokoe's notation achieved its purpose of getting ASL and other signed languages recognised by linguists as true languages. Stokoe knew it was inadequate for fully representing signs, but wished to avoid unnecessary complexity.4A manual alphabet is a means of spelling words from the majority written language. Many, but not all, signed languages have an associated manual alphabet. Some words are so frequently fingerspelled that the spelled form becomes part of the language. And some signs, especially in artificial signed languages based on spoken-language grammar, are initialised: a family of signs with similar meanings have the same movement but different handshapes derived from the initial letter of the spoken-language equivalent word. An example from Irish Sign Language is the group 'mother', 'father', 'son' and 'daughter', which have similar movement and orientation but different handshapes derived from the Irish manual alphabet.5Sutton DanceWriting and Sutton SignWriting are the two most frequently used parts of the Sutton MovementWriting suite.