The American Political Party System Content from the guide to life, the universe and everything 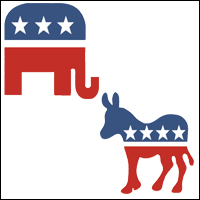 A political party seeks to achieve political power by electing members to public office to influence policy. A faction, on the other hand, is a group that seeks to promote its own interests at the expense of the common good. This distinction between parties and factions plays an important role in understanding the American political process.

Some historians would argue the first political parties in America were Federalists and Anti-Federalists during Constitutional ratification, but these were merely factions because they were not working to elect someone to office - a key distinction. Therefore, parties originated in President George Washington's cabinet with the rift between Thomas Jefferson and Alexander Hamilton over foreign policy, the national bank, and John Jay's Treaty. After Washington's resignation, Jefferson's Democratic-Republicans and Hamilton's Federalists fought for the election. Finally, after Jefferson's success in the Bloodless Revolution of 1800 and Hamilton's death at the hands of Aaron Burr, the Federalists faded out. Tensions within the Democratic-Republican party rose with the "Corrupt Bargain" election of 1824. Speaker Henry Clay supposedly convinced the House to put John Quincy Adams in the Oval Office because Adams promised to make Clay his Secretary of State. Elections between 1840 and 1852 were the last to feature the Whig Party, who opposed Andrew Jackson's version of the Democratic Party with platforms of economic progressivism and social conservatism. The re-emergence of slavery as an issue, however, split the Whigs, led to their collapse, and helped create the conditions for the emergence of the Republican Party, whose focus opposed the expansion of slavery. After the election of 1860 and since, the Republican and Democratic parties have balanced back and forth as the only effective political parties in America.

Were Parties Planned by the Founders?

Federalists didn't necessarily object to political parties since they couldn't predict their emergence, but certainly feared factions, because factions work only to promote their own interests without concern for the common good. In James Madison's1Federalist 102 he wrote:

When a majority is included in a faction, the form of popular government ... enables it to sacrifice to its ruling passion or interest both the public good and the rights of other citizens.

Also, Federalists like John Jay, thought factions to be incompatible with the philosophies of Locke and Rousseau, since they transcend individual interests and refute the existence of a general will. They eliminate the individual by creating a loyalty to a faction and its doctrines, defeating independent thought, initiative, and political conscience. Because of the extreme partisan nature of politics today, some say the American two-party system has put personal interests above the common good. The Belarusian political scientist Moisey Ostrogorsky asserts that modern parties are effective in carrying out their procedural and institutional functions but "fail miserably in upholding the paramount power of the citizen."

There are negatives to parties within a democracy, but many firmly believe parties to be necessary. British philosopher, Edmund Burke stated, "Parties must ever exist in a free country." Parties allow multiple voices to be heard. They inspire people to become proactive, providing a sense of belonging through events such as political rallies. Because of their responsibility to elect people to office, parties educate the public on various options for policies. They also work to encompass as many people, not just factions, to succeed in winning an election. For example, the Republican party envelops interest groups such as the NRA and the Christian Coalition – two groups with very different purposes, but both united under the Republican umbrella.

Others, however, agree with the first Marquis of Halifax who believed "the best Party is but a kind of conspiracy against the rest of the nation." They find parties to be too divisive. President Kennedy advised, "Let us not seek the Republican answer or the Democratic answer, but the right answer." Parties are influenced by interest groups. For example, the Pro-Life Action League funds the Republican Party, while the American Civil Liberties Union strongly supports the Democratic Party. It is argued that parties are partially corrupt because the financial backing of interest groups sways a candidate's decisions.

Whether parties are beneficial or corrosive, they exist. The historian and political scientist Clinton Rossiter said it best,

No America without democracy, no democracy without politics, no politics without parties, no parties without compromise.

1The fourth President of the United Sates2The Federalist Papers were articles published in newspapers to persuade people to ratify the US Constitution. Madison wrote several of them.