The War of the Crows Content from the guide to life, the universe and everything 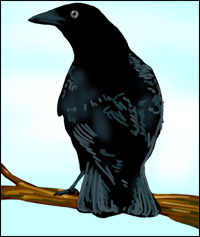 All across Europe, there is a war going on. It's been going on for thousands of years and will probably last thousands more. The stakes are high: the survival or extinction of an entire species. We're talking about the war between the carrion crow and the hooded crow.

The hooded crow and carrion crow are two very similar species. So similar, in fact, that up to very recently they were considered by scientists to be a single species. You're probably familiar with one, but not both of these:

Also known as the scald crow, or grey crow, the hooded crow is about 46cm in length, 100cm in wingspan. It has a light grey body, black wings and tail and a black head, making it easy to distinguish from other crows such as rooks and ravens. It feeds on dead meat and anything else it can find. It has a harsh cawing voice. It is somewhat sociable, hanging around with groups of other hooded crows.

The carrion crow is about 46cm in length, 100cm in wingspan. It is pure black all over, making it difficult to distinguish from other crows such as rooks and ravens. It feeds on dead meat and anything else it can find. It has a very harsh cawing voice. It is unsociable, usually seen on its own and rarely with other carrion crows.

The reason that you probably only know one of these two crows is because their territories are exclusive: most places in Europe have one or the other but not both. There is a sharp dividing line between the two. Right on the border you will find both hooded crows and carrion crows, but everywhere else, it is either one or the other. As far as the crows are concerned, the map of Europe is clearly marked out in either black or grey.

The Position at the End of the Second Millennium

The carrion crow is found in:

Why Do Certain Crows Live in Specific Places?

It's no great surprise to find that polar bears live in the Arctic while grizzly bears live further south. The constant snow in the Arctic makes a white coat useful. Further south where it only snows in the winter, a white coat would be as much a hindrance as a help, and the grizzly has a brown coat. It is the weather that marks out the territory of the two types of bear.

Is there something similar which makes a particular area more suitable for one type of crow or the other? Not obviously so.

It can't be temperature either, because hooded crows hold both Scandinavia and Southern Italy, which more or encompasses the full range of temperatures experienced by Europe. On average, Western Europe is milder than Eastern Europe: the range of temperature between winter and summer is less than in the harsh east. So perhaps carrion crows prefer milder climates; but no, Ireland is one of the mildest climates around and is entirely inhabited by hooded crows, not carrion crows.

So the conclusion seems to be that there is nothing that makes any area more suited to one than the other. So why don't we get both throughout Europe?

GF Gause was a Russian scientist who studied microscropic animals called Paramecium in test tubes in the mid 20th Century. He discovered that if he put two different types of paramecium into the same test tube, with plenty of food, one would wipe out the other. The two types of animal were not attacking each other, they were just consuming the same food. One would be more efficient at converting food into babies than the other and after a few generations, it would be the only one left in the test tube. He generalised this into a rule:

No two species can coexist indefinitely on the same limiting resource.

This is an important principle in the science of ecology. If two species are competing for exactly the same resources (land and food), then one will wipe out the other. This appears to be what is happening with the crows. Since both types of crow are identical in size, strength and eating habits, they are competing for exactly the same resource. One species must be marginally more suited to life as a crow in Europe than the other, and that species will eventually win the war. The other one will die out.

How Will the War End?

The hooded crows seem to have the upper hand at the moment, with more of Europe by area than the carrion crows, but the border area in Scotland is moving: the line is much further north than it was 100 years ago, which suggests that the carrion crows are winning in Great Britain.

Perhaps there is some trait of each crow which makes it slightly more suited to a particular part of Europe than the other species. In this case, things will settle down eventually, and like the grizzlies and the polar bears, we'll be able to talk about two species in two different habitats. But for the moment, it appears to be all-out war!