How To Complain Content from the guide to life, the universe and everything 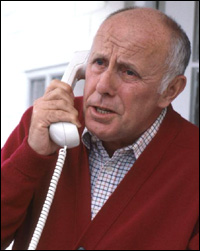 British people, in general, find it difficult to complain. They are not encouraged to do it, and why should they when a plethora of governmental bodies do it for them? Explaining to the waiter why you are not leaving a tip is effective, but just does not appeal to the average British mentality. Complaining is an art that, in some circumstances, yields unexpected rewards, or other, more unpleasant results.

Some people complain simply because they can; they have a voice so they will moan. You cannot legislate for these people. Best simply to ignore them because they are professional grumblers and do not practise for sport, but for greed alone.

This entry is aimed at failed or virgin complainers. People who normally accept that things happen and that people make mistakes.

When is it a good time? At what point does a complaint become justified? Anger is a difficult indicator to use. Sometimes, it can live a brief but bright flash of life. Start complaining in the heat of rage and you may regret it as you calm down and realise your mistake. Anger that lives a long life, slowly smouldering under the skin is unhealthy, so the less said about it the better.

If you can't use anger as an indicator, what can you use? A general sense of wrongness is a good indicator. When the waiter informs you that the foul tasting pie you just rejected is 'gourmet', and that your own taste buds are actually at fault, freeze those early thoughts. Unjust? Or, does he have a point? Of course, he doesn't; to complain read on. Clothing analysis is an underrated method of establishing that you are complaining to the right person. You need to go to Cambridge and come back the next day but are informed that the journey is too short for a return ticket. You have to buy two singles at an exorbitant price. Looking at the woman behind the counter, she's wearing a uniform. Complaining now would be a waste of time. They can't do anything about the pricing, only nod and wish you would disappear.

A smartly dressed man is a different story. How did he afford those designer clothes, or flashy suit? Probably because not enough people complained.

Assuming you have decided to complain, the next choice is in what form it will take. Loud, understanding, pitiful, violent or, with humour? Do you do it in person, by email, letter or phone call? An email is easily ignored, a letter shelved but a live voice is harder to ignore. Explain the situation calmly and then wait, don't immediately tell them what you want in recompense. Information is power. Wait for their suggested solution and see how it compares.

If you feel so enraged by an action then best to plot your feelings by writing a letter of complaint. Whether you send it doesn't matter, as it will clear the system of your initial feelings. After a day or so, re-read the letter, correct any mistakes and detail a date by which you wish to have a response. File a copy away for the future and then decide whether sending it will help matters. Sending a letter by recorded delivery is a little more expensive, but it will give you that warm feeling knowing that the offenders have to read your grievances and it won't get 'lost in the post'.

There are two types of reasons why you might want to complain to a supervisor. Firstly, the policy or procedure was not followed correctly; and secondly, the policy or procedure itself is wrong. The former are the easiest to argue. You need to speak to a supervisor; if the person who made the mistake is rude or unhelpful and refuses to put you through to a supervisor, take their name and call back. (Most people are unlikely to put you through to a supervisor if you are going to complain about them.) Most call centres have a great number of workers and you are unlikely to get the same person again.

Establish what should have been done, and explain what actually happened, and describe what happened as a result of the error. Most supervisors will apologise for the error and also do their best to sort things out. They know that if you have suffered financial loss as a result of the error then you are in a good position to claim compensation, or at least an ex gratia payment.

Raising your voice won't actually get you any further if the actual error is the fault of the organisation not the individual. If you raise your voice and later calm down, then apologise for it, without admitting that you are wrong; for example:-

I'm sorry I got angry earlier, I know it's not your fault personally, but I'm sure you can see my point.

The first thing that you need to do is establish the reason behind the policy. Is it an unreasonable charge to make money, which may well be waived if you speak to a manager, or is it required by law or an external body2? If this is the case then you are shouting at the wrong person.

Visiting in person is a bold move. It wrong foots the enemy. Take some relevant documents, eg statements, receipts and/or past correspondence. Most importantly though, is to put them in a smart folder held under your arm. Nothing scares them more than an organised complainer.

Some people are not natural complainers and can fold under pressure. Help is just a few minutes away. Various organisations exist solely to serve you. They do it for free, and normally know more than they should do. The Citizens Advice Bureau is one example, and probably the most widespread in the UK. Talk to your Council, talk to anyone, someone will know someone that knows something.

The last resort, apart from the courts, is a trick known as the table turner. It's a simple, yet effective, way of getting noticed by the boss. If all else fails, contact Companies House and ask them for the home address of one or all of the Company's directors. This is compulsory and freely available. Write them a letter and send it to their home. Tell the big wigs how you have been wronged and let them know that you must have a response, or maybe a few more letters will hit their doormat, every day.

It can be very useful, if you feel it is justified, to use this method of writing to people high up in the company. If you are not getting the response you want from managers or supervisors, go higher. The Chief Executive of BT, for example, is renowned for his speedy and effective responses to complaints that come into his in- box. An excellent guide entry to letter writing can be found at Writing a Letter to the British Government. Much of this entry is useful when complaining, particularly to bosses. Another useful entry is How To Complain If Someone Owes You Money, for a more specialised type of complaint.

The final and most important point is to know when to stop. Suing your neighbour when his new fir trees block your morning sunlight is an aggressive solution. Make your complaint and then finish it.

1Often including the details of the relevant Ombudsman, who will adjudicate if you feel your complaint has not been dealt with adequately.2For example, the 'best practice for security', as recommended by the bank's governing body.