The United States House of Representatives Content from the guide to life, the universe and everything 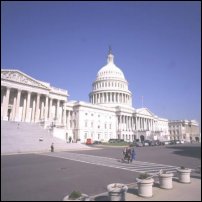 Author Douglas Adams once wrote, 'Every country is like a particular type of person. America is like a belligerent, adolescent boy, Canada is like an intelligent, 35 year old woman. Australia is like Jack Nicholson.' In the same sense, each branch of the United States government is like a particular kind of person. The Senate is like a know-it-all older brother who has a bookshelf full of novels and memoirs which he's never read. The Supreme Court is like an ancient war veteran who likes to relate his tales far past the point when everyone stopped listening. The United States House of Representatives is like an ambitious, hypersensitive youth with an anger problem. So runs the government of the most powerful nation on Earth.

The House of Representatives is the lower House of the US Congress, and it holds one half of the legislative power of the Federal government. The House (as it is referred to) is set at 435 members, each elected by the people of a Congressional district. Representatives are expected to look out for the interests of the people they represent, in every way they can manage. Such an unwieldy body is prone to argument, aggression, competitiveness and not a few nut jobs. Compared to the slow-moving Senate, the House of Representatives is downright rowdy.

The Will of the Founders

In an effort to make the House the more democratic of the two houses of Congress, the Framers of the Constitution required that Representatives be elected every two years (compared to a Senator's six year term). The entire House of Representatives is elected every even-numbered year during national election day in November. They set a fairly low age requirement to be a Representative - 25 years old (compared to 30 for the Senate and 35 for the Presidency). The Constitution also does not require that a Representative live in the district that he means to represent, only that he is a resident of the state in which his district sits.

The House of Representatives was set up by the Constitution's framers with one power that the Senate had not - it was to draft 'revenue-raising' bills (essentially meaning taxes). Bills that brought in money for the Federal government could only begin in the House of Representatives. A Senator could draft a tax bill, but he would need to convince a Representative to introduce the bill. In the House, the committee which deals with matters of taxation and revenue raising is the powerful Ways and Means Committee.

The power of impeachment resides solely in the House of Representatives. If a majority of the House of Representatives vote to impeach, or accuse, a Federal official (including the US President) of a crime2, the trial takes place in the Senate to remove them from office. Contrary to popular belief, impeachment doesn't actually remove a federal official, it simply makes it possible for the Senate to remove the official.

Every ten years, the United States conducts a census. On the basis of that, a certain number of Representatives are distributed to each state every decade. The smallest in population states get only one Representative, to serve the entire state. The largest states can get 25-50 Representatives. For states assigned more than one Representative, the state legislatures handle the task of putting together a map of the correct number of equally populated districts inside the state.

State legislatures are just about as partisan as the United States Congress, as a rule. The members of each party want to manipulate the map of Congressional districts so that it benefits the party to which they hold allegiance. This is known as 'Gerrymandering'3. The party in control of the state legislature following a census routinely adjusts the Congressional map with a goal of getting more of their members elected. This can be done by analyzing past election data or demographic trends. It's almost always successful. A good Gerrymander can singlehandedly change a state's Congressional delegation from Republican-dominated to Democrat-dominated (or vice versa). In recent years, partisans have found success in skewing to their favour the district maps of states like Texas, Ohio, Georgia and North Carolina.

Gerrymandering does not only result in an advantage for one party. When trying to create a map favourable to one party, little is left to chance. This means that there are very few districts left with comparable numbers of Democrats and Republicans. Usually in a Gerrymandered state, districts are either solidly Republican or solidly Democratic. This has resulted in an extremely high reelection rate, where incumbent Representatives seeking reelection get sent back to Washington, DC at well over a 90% rate. Oddly enough, the reelection rate is slightly lower for the Senate, which is just the opposite of what the Framers of the Constitution intended. They wanted Representatives to have the sword of public opinion constantly hanging over their heads, but Gerrymandering has given long term job security to almost all members of the House of Representatives.

Oddly enough, though the practice of Gerrymandering is considered undemocratic, it does have some good consequences. States Gerrymandered by Republicans tend to elect more racial minorities. Republicans will try to manipulate the map of districts so that there are some districts which have a 70-90% Democratic lean, so that there can be more districts with a comfortable 55%+ Republican lean. Those 70-90% Democratic districts are in big cities, which tend to be home to racial minorities because minorities often vote for Democrats. Very often, the net result of a Gerrymander is the creation of a 'majority-minority' district, where African-Americans or Latinos or another ethnic group actually makes up the majority of a district. Not coincidentally, the House of Representatives has been quicker than the Senate to see racial minorities join its ranks.

While Gerrymandering is a transparently undemocratic and unfair practice, it is not the most shameful part of the history of Congressional districts. In Article I (Section 2) once stated-

Representatives and direct Taxes shall be apportioned among the several States which may be included within this Union, according to their respective Numbers, which shall be determined by adding to the whole Number of free Persons, including those bound to Service for a Term of Years, and excluding Indians not taxed, three fifths of all other Persons.

'All other persons' refers to slaves. This infamous 'three-fifths compromise' was included in the original Constitution (later removed by the 14th amendment) to placate unhappy southerners. This reference in the Constitution was used by some slavery apologists to claim Constitutional sanction of the practice. It also had the effect of bloating the size of the southern delegations to Congress, and enhancing the impact of the south in picking the President (as the electoral votes of a state are based on the number of Representatives and Senators a state has). Worst, it exposed the blatant hypocrisy of southerners, who believed that slaves were human enough (or 60% human at least) to be counted in the census, but not human enough to deserve freedom and liberty.

Your representative owes you, not his industry only, but his judgment; and he betrays, instead of serving you, if he sacrifices it to your opinion.
-Edmund Burke

A Representative in the US Congress has many masters. First and foremost are the people of his district. Next is the party to which the representative belongs. And last is the lobbyists, contributors, volunteers, interest groups and establishment figures who helped to get the candidate elected. A pragmatic Representative is forced to balance the interests of these three groups as best he can, and hope one of them doesn't get jealous of the other.

Representatives serve the people of their district by making sure that the Federal government spends money there, and its people get what they need out of the government. A Representative generally gets major kudos from the people if he manages to prevent the government from shutting down a military base in the district (which are major sources of employment). He can also grease the wheels of public opinion a bit by inserting expenditures into budgets and appropriations bills to benefit his district. This is a practice known as 'pork-barreling', probably because Representatives resemble greedy pigs during this process. The most senior Representatives are better able to direct Federal spending into their districts, and they can get away with just about anything. Pork barrel money can be directed towards the building of a pointless bridge or superfluous study or to finance the construction of an indoor rain forest museum.

Representatives also serve the people of their district by having their staffers take care of what is known as 'constituent relations'. If a veteran living in a district is having trouble getting his benefit cheque from the government, he might call his Congressman's office. The Congressman's office might then call the Department of Veterans Affairs, and see that it gets taken care of. Representatives also appoint young men and women in their district to the military academies - which one can only get to by way of an appointment by a Congressman.

While it is not obligatory for a Congressman to belong to a party, they almost always do - and almost all of them belong to either the Democratic or Republican parties. Having the nomination of one of the major parties provides viability, activists and money to get elected. Once elected, the party provides committee seats and some sense of direction. However, since the 1950s, the party establishment has become much less powerful. The major figures in either party are now much less able to control their members and decide who will be their nominees for a Congressional district. It's possible now to run as a Democrat, win the Democratic nomination without party resources, win the general election on your own without party resources, and vote like a Republican in Congress. Parties have no real control over Congressmen. Nevertheless, though, the members of each party tend to vote with each other at about a 90% rate.

The dark side of being a Congressman is that it is a necessary evil to deal with lobbyists and those who wish to bribe and influence. People who give large amounts of money to a candidate's reelection are generally not just doing it for fun. Most expect something in return. Whether it's a vote on a key piece of legislation or a simple favour, it is an unfortunate fact in American politics that campaign money and actions in the Capitol are very much related.

1State legislatures being the lawmakers of every state, generally designed like a sort of mini-Congress.2The Constitution specifies that an official can only be impeached for 'high crimes and misdemeanors', whatever that means. This is not a criminal court, though, and most Federal officials can still be tried in court.3Named for former Massachusetts Governor Elbridge Gerry, who helped to create an oddly shaped Congressional district that resembled a salamander. The local press dubbed it a 'gerrymander' and the name stuck to the concept.