An Introduction to Sport Climbing Content from the guide to life, the universe and everything 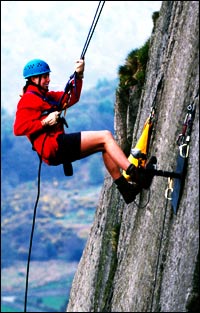 Rock climbing has evolved hugely from the early 1900s, when bearded blokes scaled cliffs in hobnail boots and used hemp ropes. A century later there have been huge advancements in clothing and equipment, but also changes in climbing styles. In the UK, traditional1 or trad climbing was previously the norm. These days it's still favoured by purists, but is closely followed by sport2 climbing (especially popular in Europe) and indoor3 climbing on artificial walls. Another breed of crag-hopping, bouldering4 enjoys an enthusiastic fanbase all of its own.

So why go sport climbing? Well, it's easy to forget that rock climbing is a potentially dangerous pastime. Scaling artificial walls indoors, attached to top ropes is right at the centre of your comfort zone, compared to say trad climbing crumbly sea cliffs with waves lapping your ankles - a scary prospect. So for relative beginners, those making the transition from indoor to outdoor climbing, sport climbing makes for a great intermediate step to trad. Where trad routes involve the precarious art of inserting pieces of gear (nuts, hexes and cams) into the rock along the route to hold the climber in place, sport climbing involves a slightly easier method of clipping of quickdraws5 into in-situ bolts drilled into the wall. When reaching the top of the crag, if it's a single pitch 6 climb, the leader doesn't have to make an anchor7 to belay the second up, but instead attaches the rope to rings or karabiners (a ready-made anchor) and is lowered down by the belayer8 .

That's not to say sport climbs are generally easier than trads. Most sport crags offer routes for all abilities from beginner to seasoned expert and competition climbers. The bolt protection means climbers don't have the constant worry of where to put their next bit of gear but can concentrate fully on the physical and technical challenges of the route.

To figure how many quickdraws to take up, try to count the number of bolts on the route and allow a couple more for that sneaky bolt that may be hidden from view, or in case any are dropped. When clipping quickdraws, make sure that the karabiner with a bent gate is used on the rope and not the bolt. This avoids them rattling and coming unclipped in the event of a fall. Sport climbers get away with carrying far less gear than their trad counterparts so delicate, overhanging moves are easier. As are the walks between crags.

When deciding which route to climb, a guidebook is invaluable. These provide topographical, or topo, information about crags and the climbs on them. Some carry photos as well as diagrams which help enormously with route-finding and each climb is assigned a grade.

A comparison of British Trad and French Sport Grades

In the UK, the limestone peninsula of Portland in Dorset is very popular with over 900 routes which are well above sea-level so unaffected by tides. Although the view on the top is of fairly ugly housing estates and an MOD building, it changes for the better down below to idyllic white cliffs set against the backdrop of Chesil Bank, a 15 mile-long beach fronting Britain's largest tidal lagoon.

Other UK sport crags can be found in South and North Wales, the Peaks and the Lake District.

Communicating between the leader and belayer is vital if accidents are to be avoided. After all, although climbers are social animals having a laugh and enjoying the adrenalin buzz, the fun is built on a solid foundation of trust and teamwork, where belayers hold the life of the leaders in their hands. These standard climbing calls make life considerably safer.

1Trad requires the climber to place removable protection equipment (gear). A placement is known as a runner and is designed to hold the force of a falling climber.2Here the element of danger is reduced by route-setters drilling pre-placed protection, or bolts into the rock. Climbers may then fall relatively safely and can also tackle much (technically) harder routes.3Indoor centres are also known as 'walls' or 'gyms'. Plywood panels are used to build the walls, with plastic or stone moulds screwed in at various intervals to create the climbing routes. These are regularly rearranged to set new challenges. Ropes are attached at the top of the walls, ready for climbers to tie into, and be belayed up by their partner.4A sport that involves clambering over boulders with no ropes or protective gear other than a crash pad.5Quickdraws are a short length of nylon sling, with a karabiner at each end. One clips onto the rope and the other clips onto the protection (be it metal bolts or trad-gear like nuts, cams or hexes). So as long as the belayer holds a fall, the leader will remain attached to the rope, which in turn remains attached to the rock.6Roped climbing is facilitated by breaking up a wall into pitches. A pitch is the section of a climb between belays. The first belay is usually the ground, and the last belay is usually taken at the top of the climb. Many climbs only have one pitch, some have over 30.7When trad climbing, the anchor or belay at the top of a pitch means the rope being attached to two or three points of protection (usually rocks) that are equally loaded, to hold the leader in place while the second climbs up.8Belaying is the act of controlling the rope using a belay device. Typically, the belayer pays rope out and takes rope in when required, and brakes the rope in the event of a fall