Bouldering Content from the guide to life, the universe and everything 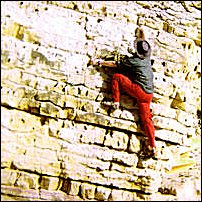 Bouldering is the fine art of climbing on boulders. Silly as this may sound to some, bouldering is actually a very refined subset of the sport of rock climbing. Unlike most other types of rock climbing, however, bouldering is usually done unroped and without any real protective gear save for the odd crash pad1. As a result, bouldering problems2 can often be far more difficult than roped climbs since you don't have the reassurance of the safety gear to help you. On the other hand, you don't have the weight of the rope, or protective gear getting in the way, nor do you have to stop to place or clip protection. Since you're so close to the ground (most bouldering problems don't exceed five or six metres in height) the consequences of a fall are usually not that serious.

The Origins of Bouldering

For many years, bouldering was considered a sort of practice for 'real' rock climbing, good for training muscles and having a bit of fun when you didn't have time to do a roped climb, but not an end in itself. This perception has changed greatly in the past two or three decades, due in large part to the efforts and problems of John Gill, a man often considered the father of modern bouldering.

Gill legitimised bouldering as a sport by developing bouldering problems which required entirely different techniques and skill sets from ordinary rock climbing. Gill endorsed dynamic movement on the rock and did many first ascents, without the benefit of modern climbing shoes, that still stand as test pieces today. Gill was famous not only for his bouldering but for some of the feats of physical strength he performed, such as pinch-grip pull-ups and one-arm side levers3. Gill was a gymnast during his college years, and introduced the use of gymnastics chalk to climbing as a means to dry one's hands and improve grip. The use of chalk is the reason why, if you look closely at just about any boulder of climbable size near a populated area, you are likely see a few whitish stains on some of the ledges and holds where climbers have been practising.

Tools of the Trade

One of the great things about bouldering is that is not a very gear intensive sport. To go bouldering, the most you'll need is a pair of rock shoes, a chalk bag, and some gymnast's chalk. A stiff-bristled toothbrush is useful for cleaning the excess chalk and dirt off holds, and a crash pad is nice for softening the blows of falls.

1A large piece of foam, typically covered with some durable fabric, that you attempt to land on when falling so as to avoid bruising your heels or breaking bones on the often rocky landing zones. Some crash pads have several layers of foam of different densities to help absorb and distribute the shock properly.2Sequences of holds or movements used to get to the top of boulders.3A lever is a move where one holds on to a bar or a hand hold and then pulls his body to where it is hanging parallel to the ground.