Snow Rollers Content from the guide to life, the universe and everything 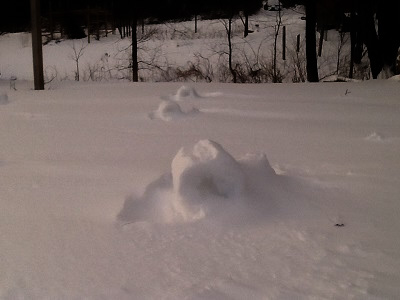 No, this has nothing to do with rolling naked in the snow. Snow rollers1 are an uncommon phenomenon of winter, requiring just the right combination of temperature, humidity, wind speed, terrain and of course, snow.

What is a Snow Roller?

One winter morning you glance out your window and spot snowballs scattered all over your yard. You also note that there are no footprints in the snow surrounding them. Are they some phantom's inept attempt at building a snowman, or has someone played a prank on you? Neither, as it turns out.

What you are seeing are snow rollers, which are essentially self-rolling snowballs. They look like rolled-up sod or a fur muff and can vary in size from a couple of inches in diameter to the size of a 30-gallon drum. A typical one is about a foot in diameter and is often hollow inside.

Now let Mother Nature work her magic. What happens is that a gust of wind scoops up a chunk of snow and rolls it a bit. The new, wet snow clings together, while the icy surface below allows the chunk of snow to slide and roll easily. Repeated gusts will move the new snowball again and again, allowing it to pick up more snow with each roll. Eventually it will either become too heavy for the wind to move, or it will encounter an obstacle such as vegetation or a slight rise in the terrain, at which point the snow roller will stop moving, leaving a trail behind it to mark its journey.

Given the precise set of conditions required, it's easy to see why people rarely spot snow rollers. In fact many professional meteorologists have never seen one. Not only do they form infrequently, they're actually pretty fragile; if the temperature should fall or rise, they'll collapse. This researcher has seen them only once, in February 2003 and they disappeared once the sun rose. Some scientists suspect that many form quite often across the frozen fields of North America, where the weather can change abruptly and dramatically due to competing masses of cold and dry Arctic air and warmer, moist air from the Gulf of Mexico. So far, however, this theory has not been confirmed, nor has the rumour of giant snow rollers the size of hay bales forming in the Arctic.

Whatever the truth, people who have spotted snow rollers feel lucky to have seen Mother Nature showing a sense of humour.

More From the Edited Guide

Our savvy researchers are never at a loss when it comes to dealing with snow:

1There is disagreement on the spelling of the name, with some favouring the single word 'snowroller'.