Cigar Store Indians Content from the guide to life, the universe and everything 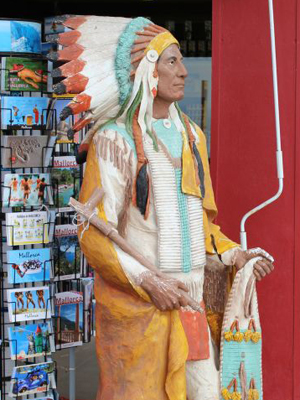 One of the earliest of American trades was in tobacco. Native Americans (or Indians) first introduced European explorers and settlers to the tobacco crop. It was on 15 October, 1492 that Christopher Columbus received a gift of tobacco leaves from a group of natives he crossed paths with. Tobacco quickly became popular with white men the world over. This was well before multinational tobacco companies had million-dollar advertising budgets, so you might be forgiven for wondering how tobacco became so popular without cartoon camels and advertisements in stock car racing. In fact, tobacco was believed to have curative properties. Some doctors even believed that chewing the leaves would cure cancer. As tobacco became more popular, stores sprang up to sell it.

Just as Prometheus, the fire-giver, is forever linked with fire, so too the Indian bestowers of tobacco became associated with their gift. European tobacco-peddlers paid for the carving of large mythical, exotic-looking and not so subtly-racist wooden statues. Having mostly never seen Native Americans themselves, this was their warped conception of what the savages of the New World looked like. They set these figures out in front of their stores (and some of the smaller ones inside). Not unlike the use of barber poles1, the wooden Indian statues were used to guide the illiterate. While a sign reading 'tobacco' would be of no use to the huge portion of the population that could not read, a colourful wooden figure was a perfect gimmick, telling anyone and everyone that tobacco was sold there. In Europe, these statues were sometimes referred to as 'Virginians'.

Eventually, this tradition of wooden cigar store Indians found its way over to America in the 1800s. However, since many Americans had interacted with Indians themselves, their carvings were much more realistic. While many (if not most) of the representations were clearly racist and condescending, some were fairly accurate and even beautifully carved. Early on, most of the statues were female. Some would be depicted carrying their babies and wearing colourful war bonnets (the stereotypical feathered headdresses), which were characteristic of the Plains Indians. Males might be shown as wearing tobacco leaf kilts around their waists. Some were depicted quite savagely. One must remember the intent of the Cigar Store owners who commissioned these statues. It was probably not to malign Native Americans in any way, but rather as a form of advertisement and a way to draw people into the store. The more savage, colourful, and interesting the statue was, the better.

The story of American growth parallels the saga of the wooden Indian. First, with the advent of the steam-powered boat, wooden figureheads at the bow of old sailing ships were out of date. Professional wood carvers, whose business included the creation of these wooden mermaids and ladies, were suddenly left without as much business. According to the simple principle of supply and demand, this made the services of these carvers inexpensive, and the Indians more affordable. These statues proliferated, and there was a time when no self-respecting tobacco store in America would be caught without a wooden Indian to greet its customers. At this period of American history, people would purchase their cigars and tobacco from small, independent stores in little trading communities. Shops were widely spaced from each other, and there was plenty of room for these wooden figures in front of the stores. However, going into the 1900s, America became more urbanised. Some big Indian statues in large cities fell foul of city ordinances to keep things from blocking the sidewalks and streets. Growing populations also began to vandalise the statues. Consequently, many of them had to be moved inside of the store, and they served more of a decorative than advertising purpose. With the two World Wars and the Great Depression, many metal2 Indian statues were melted down and some of the wooden ones were chopped up for firewood.

These figures became less and less relevant over time and production screeched to a halt. Growing awareness of America's historic insensitivity to Native Americans also contributed to this. For some people, the cigar store Indian is a symbol of America's shameful relations with Indians. Nevertheless, these figures can still be found in museums, celebrating the history of tobacco. Some genuine old wooden Indian statues can fetch a hefty price at auction these days. Many tobacco shops which truly value kitsch still provide homes for these solemn warriors.

1Or, for that matter, the Golden Arches of McDonalds.2Most of the statues were carved wooden models, but a minority were made of iron cast.