Caesar - the Drink Content from the guide to life, the universe and everything 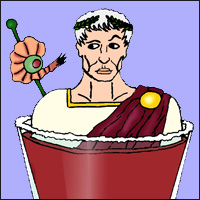 Along with diverse artists such as Leonard Cohen1, Tom Thomson, Bryan Adams and Avril Lavigne, not to mention many rightfully boastful Researchers, Canada has produced a unique and unusual drink. Although born in Montenegro, Mr Walter Chell was an employee of the thoroughly Canadian Calgary Inn in Calgary, Alberta, when he invented what he dubbed the 'Bloody Caesar' in 1969. Some say he was inspired by the vongole sauce of the Inn's Italian restaurant when he hand-mashed cooked clams, then added tomato juice, Worcestershire Sauce, hot sauce, a slice of lime, vodka, and a stick of celery as a garnish. The rest was history.

Rim a glass with a combination of salt (usually celery salt) and ground black pepper2. This is done by moistening the rim with a clean, wet sponge and then dipping the wet rim in the combination. The rim can be moistened with a lime or lemon slice if preferred.

Now add vodka3, ice, and a stick of celery. Add hot sauce to the drink to taste; most people use Worcestershire Sauce and Tabasco, some add horseradish or even wasabi.

Squeeze in a slice of lime. Top with cold Clamato juice, which is a mixture of the essence of clams (the nectar produced when they are steamed) and tomato juice4.

Seafood and fruit? It gets even better! So let's review. Fruit juice with hot spices and seafood, in a container rimmed with still more hot spices and artery-clogging salt. But wait... Years of refinement have made this drink even more mind-boggling. Some establishments add a cold cooked shrimp as a garnish - even more seafood with the fruit! Many add spicy pickled green beans or pickled asparagus - so now we have vegetables!5 A suitably classy establishment may add a lime slice, celery, spicy pickled green beans and a cold cooked jumbo shrimp. Some even add a cooked or smoked clam in memory of the original recipe.6 Needless to say, the food items may be eaten at any point during the drink's consumption. It's a spicy hot, mind-numbing, artery-clogging, bizarre mixture that tends to blow the socks off the uninitiated.7 Not for the faint of heart, so it is no wonder that many have dubbed this the 'National Drink of Canada'.

Rim a glass with salt and pepper as mentioned earlier. In the west of Canada it's generally a very large glass, whereas in the east it is usually much smaller. This is strange, since although the east considers itself to be more civilised and refined, they are definitely more in need of a stiff drink.

For the purist, only a mouth-burning, eye-wateringly spicy, pickled long green bean is necessary as a garnish, along with the lime wedge and salt/pepper ring. So now the recipe for the green bean, which is often prepared in the late summer in preparation for the winter 'drinking' season.10

Prepare pickling vinegar with more hot spices than you think are needed, some sugar, a little salt to taste, and still more spices. Bring to boil and then reduce the heat slightly. Wash and blanch entire green beans, without removing the tops and tails, then quench with ice water.

Prepare and heat large (half-litre) canning jars and boil the tops to soften the seal.

Pack the beans into the jars and slide the peppers and raw garlic in interesting patterns against the glass.

Pour the eye-stinging, cough-inducing vinegar mixture over the beans and close immediately (only finger-tight). When the tops 'ping' and pop inwards you know the seal is good. Although the vinegar, salt and ridiculously large amounts of hot spice will kill any form of harmful life, discard any non-pinging bottles, or else heat them until they lose some of their crunch and start again.

The beans will be ready in a month or more, but it is advisable not to leave them for much more than a year. If you do and forget them, leave them in a time capsule for future archaeologists to puzzle over11.

Consider if you will the non-alcoholic drink Clamato. As chronicled by numerous Canadian comedians, this is a combination of spectacularly bizarre flavours.12 Clamato is a rare and wondrous drink, usually found only in Canada or places frequented by Canadians. It can, however, be found in many places in the United States because of its adoption by the Hispanic community there. If you are unlucky enough to live in a place where you are unable to acquire this nectar of the gods, a combination of one third clam nectar and two thirds tomato juice will have to suffice. Poor devils.

How does Canada produce all its musicians, comedians and Researchers? Could the 'Bloody' Caesar be the reason? Only Caesar-swilling, Red Needle-gulping, Caribou-slurping Canadians know for sure.

http://www.bbc.co.uk/food
1Who made his own drink called the Red Needle2Some even add dried chilli pepper flakes to their mix and even sea salt with ground seaweed, but those are Zen Caesar Masters and are beyond the ken of ordinary mortals.3No vodka makes it a 'Virgin Caesar'.4Tomato juice is actually a fruit juice.5This is starting to look like a shrimp salad...6Other recipes have included 'cherry' tomatoes, cucumber wedges, fresh basil, fennel, parsley, or cilantro (coriander), stuffed green olives, smoked salmon, and/or hot peppers of all varieties.7So much so that many who imbibe in Canada ask for a 'fire extinguisher' with it, which, to the bartender who is in the know, is a cold beer on the side.8While it's generally understood in Britain that a 'smart cocktail' is sans solid water, we are talking about the 'frozen north' here, OK?9If celery must be used, make sure it's leafy at the top.10Notably around Christmas when a Caesar will warm the cockles of one's heart, if not one's entire body.11Some may pickle asparagus in the same manner but those who know of its antisocial nature avoid it.12The Mott company has successfully made claim to its invention after Mr Chell had invented his drink - after some legal wrangling Chell actually became a spokesman for the company until his death in 1997.