The History of Spain (1250 - 1450) Content from the guide to life, the universe and everything 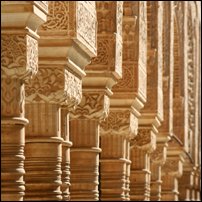 With the conquest of the Moors around 1250, Spain was at last more or less united, but only by religion1. Four major powers shared the country. Navarra ruled the mountains and foothills of the far northeast including the Basque country. To the south of Navarra lay the kingdom of Aragon, with its capital at Zaragoza. This kingdom was particularly interesting, because it included the coastal area of Cataluña, an outward-looking state that was superior to Aragon in many ways. A long strip in the far west of Iberia was ruled by the kingdom of Portugal, which would manage to avoid forming ruling alliances with any of the other states over the centuries and become a powerful nation in its own right. It is often said that Portugal just managed to hang on to its independence while Cataluña did not. Then there was Castile.

With its land stretching from the Bay of Biscay to the Atlantic coast and the Mediterranean, Castile was the eminent force. A brief look at a map of the time shows that, with hindsight, it was almost inevitable that she would swallow up her neighbours in time. There were, of course, more factors involved than girth alone. Castile's borders included most of the traditional seats of power, including the Visigoth capital of Toledo and the Moorish one at Córdoba, as well as the most important pilgrimage centre in Europe at Compostela. The Castillians also had language on their side; Castillian quickly became the lingua franca, partly because of Castile's geographical position and partly because it was the most advanced written language. The kingdom was edging its way to the fore, though it would later prove to be its own worst enemy.

The young kingdoms had a range of problems to face. For a start, there was the problem of what to do with all the Muslims in the south of the country; after all, it had been a holy war. However, the Moors themselves were glad to be rid of their final rulers, the fundamentalist Almoravids, and the overwhelming majority stayed on and deferred to their new rulers. They became known as the Mudéjars, meaning 'those who accept submission', and in the early years after the Reconquest little changed for them. They accepted Christian rule, and the Christians accepted them. Indeed, for a while it seemed that a genuinely tricultural society would develop in this mix of Christians, Muslims and Jews. The Mudéjars themselves would give their name to a particularly Spanish style of architecture most notable in the fine alcazar at Coca, Segovia and in the southern cities of Sevilla and Granada.

Economically, Spain languished far behind the rest of Europe. Centuries of on-off war had left the tribute system - that of paying to avoid war - as the central pillar of the economy, and when the war ended there was nothing to take its place. Aside from the merchants of Cataluña, who were beginning to make inroads into lucrative Mediterranean markets, trade was in its infancy. Even if there was, the Spanish kingdoms had little to trade but raw materials - they produced plenty of wool, for example, but didn't have the means to do anything with it. Instead it was sold to other European countries who had the means to produce garments from it and reap the profits.

King Fernando III of Castile died in 1252. The Kingdom of Granada, whose existence he had guaranteed, sent 100 knights to honour him, but perhaps the most significant symbol of the age is his epitaph in Sevilla's cathedral. It is written in Latin, Castillian, Hebrew and Arabic.

Fernando was succeeded by his son Alfonso X, also known as Alfonso the Learned. He was just the sort of king you need after a long war; his 32-year reign brought stability to the country and sparked off a sudden cultural flowering to rival that of the Moors. He was a ruler tolerant of religious differences - he called himself 'The King of Three Religions' - and had classic works translated into directly into Castillian as well as into Latin. It was a glorious three decades.

Unfortunately, the long-term trend of Spain's kingdoms doing their best to implode continued. On Alfonso's death, Castile's powerful aristocracy supported his son Sancho's claims to the throne against his father's former wishes - Alfonso wanting the line to pass to the sons of his deceased eldest son, Fernando de la Cerda - and a succession crisis began. Sancho executed many of his opponents, but the situation turned critical when his uncle Juan invited a north African tribe, the Marinids, to invade Andalucía. One of the most famous stories in Spanish history came from when they put Tarifa under siege. The invaders threatened to kill the Castillian commander's son if he did not surrender, but Perez de Guzman replied with typical Spanish spirit. Throwing his knife from the city walls he shouted 'Here is the knife to do it, but I will never surrender!' Eventually, the revolt was put down and the Marinids were defeated at the battle of Rio Salado in 13402. The crown survived - barely - largely thanks to the efforts of the remarkable queen, Maria de Molina, who held off the nobles' power grab and secured the throne for her infant grandson. Castillian politics would remain chaotic for a while to come.

By the 14th Century, the old ways of tolerance were beginning to unravel. Muslims were forced to wear their hair in particular styles and wear certain clothes, and the Jews were routinely blamed for economic crisis. More sinisterly, the Jews were also accused of a plot to poison Christians in the 1340s when the Black Death arrived. Concurrently, there was a succession of unpopular kings, with names such as Pedro the Cruel, most of whom surrounded themselves with Jewish tax collectors and financiers. Being associated with hated regimes is not considered recommended behaviour for minority groups. Antisemitism was on the rise - though it must be noted that their contemporaries in France and England were being expelled and having their property confiscated at around the same time.

There were some bright points illuminating this dark era. Iberians, led by the Aragonese, had finally learned how to trade. Catalan sailors ranged all over the Mediterranean, and even established a Catalan-speaking Duchy in Athens which lasted for 60 years! The Castillians developed the ports of Sevilla and Cartagena, although they were not experts. In fact they considered commerce to be a pursuit better suited to Jews or Mudéjars, so the Genoese dominated local trade. The Genoese connection would eventually change Spain forever.

That was still a century away, though, and the lean period stretched on. By 1500, the political map of Spain had changed very little, but the balance of power had tipped decisively. Across Spain, weak kings had gradually ceded power to the aristocracy. Juan II, for example, ruled Castile for almost 50 years between 1406 and 1454, but the actual power lay with his court favourite, a nobleman called Alvaro de Luna. The king simply signed anything his minister put in front of him, until Alvaro was accused of murdering the king's accountant and beheaded. You can make what you will of Juan's later pronouncement that he would rather have been 'born the son of a workman than the king of Castile'.

Yet another succession crisis followed. Juan's son Enrique IV, though physically repugnant, still managed to enjoy a debauched youth which was rumoured to have made him impotent. He was deeply unpopular, and when his second wife finally produced an heir, Juana, in 1462, she was presumed to have been sired by a courtier, Beltran de Cueva. Firmly convinced of Juana's illegitimacy, the aristocracy firmly opposed her, supporting the king's half-sister, Isabel, instead.

Enrique had often cast around for suitors for his sister in order to strengthen alliances with neighbouring kingdoms, and the choice came down to King Alfonso V of Portugal3 or Fernando, prince of Aragon and heir to the throne there. Alfonso was twice Isabel's age, so it was little surprise when Isabel chose the young and handsome Fernando. Few would realise the significance of her decision.

1The Muslim kingdom of Granada would continue to rule a small area of Andalucía until 1492.2A notable battle because it was the first time artillery was used in a European war.3Ironically, Juana is believed to have been conceived on a visit to the Alfonso's court.