The Vindolanda Tablets - 'Send More Socks' Content from the guide to life, the universe and everything 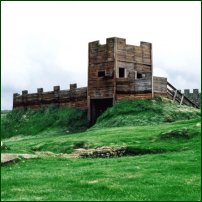 Vindolanda was the name of a Roman fort near Hadrian's Wall. The name may come from the Latinisation of an existing name and is thought to mean 'white lawns2'. Excavations there have turned up hundreds of small wooden tablets, which on closer inspection turned out to be a historical treasure trove of letters.

Vindolanda had begun life as a fort for auxiliary3 soldiers. It was built originally of turf and wood near a road called Stanegate4, which acted as the frontier with Scotland. The fort underwent demolition and rebuilding under the Emperor Hadrian. Later, in the 3rd Century, Rome saw fit to order a rebuild of the structure in stone.

Locals would certainly have known of the existence of the remains of the Roman fort, but its first mention in writing was in 1586. Several other written references followed, bringing the fort greater attention.

The first actual excavation began in 1814 under the Reverend Anthony Hedley, but he did not make a report before his death in 1835. Work began again in the 1930s, but World War Two forced a temporary cessation of excavations.

The site director initially estimated the site could take upwards of 25 years to excavate and examine in full, but current estimates expect another 100 years might be necessary to explore fully the extensive and impressive archaeological site.

Archaeologists working on the site have turned up a multitude of finds, but by far the most significant was hundreds of wooden slivers. On closer examination, experts identified these as documents, many of them letters. Archaeologists had only discovered a couple of letters of this type before, and experts considered them aberrations rather than a standard method of correspondence.

The Romans usually wrote on parchment, papyrus or wax tablets, depending on local materials. A plant not native to Britain, Romans would have had to import papyrus5; and likely would have done the same with wax tablets as well. Wooden tablets covered with a layer of wax were a very common method of writing in the Roman world - writers scratching words into the wax with a stylus. Excavation found both tablets and styli at the site, as well as a pen nib. Compared to the laborious process of parchment preparation, Romans - especially those located in remote outposts - must have found small pieces of wood a much more convenient medium to prepare and write upon.

Whoever made the tablets primarily utilised wood from birch or alder trees. They were small, the largest being about the size and shape of a postcard. The size meant short letters – the longest discovered is only 45 lines in length. They ranged in thickness from about 0.25mm to about 3mm and the surface was specially prepared to make it smooth and suitable for writing on in ink. The use of very young trees to make the tablets made it easy to bend and fold them.

Those using the tablets wrote with the wood arranged horizontally and split the contents into two columns. By writing in this format, they could score and fold the wood in half without disrupting or obscuring the text of the letter. However, many examples show, for whatever reason, extended width in the left column, meaning the crease in the tablet goes right through it. Perhaps the writers simply failed to judge their columns. Once the writer completed their letter, they folded the tablet in half, with the text on the inside, and inscribed the address of the recipient on the outside of the right hand side.

The tablets survive because either someone dumped them during the occupation of the fort or the soldiers left them behind when they abandoned the site. Some tablets show evidence of fire damage, which suggests many more may have existed but not survived. The tablets did not disintegrate because of anaerobic conditions in the soil. Clay blocked oxygen getting to the tablets, and therefore prevented bacteria from rotting them.

Not all of the tablets were letters. Many tablets detailed aspects of daily military life at the fort – including strength reports, duty rosters and the like. Where the tablets did contain personal letters, they addressed men in the garrison or the family of the commander. Some of the abandoned tablets also contained drafts or file copies of outgoing correspondence. The sorts of letters archaeologists found include a birthday invitation and a letter concerning fresh underwear and socks.

Importance of the Tablets

The letters present a treasure-trove for historians. Such a find is incredibly rare and the information historians can glean from it is wide-ranging. The Vindolanda tablets have revealed many things about Romans, their correspondence and their society:

1Accompanying a care package from home, the letter would appear to indicate individual family members who added items to the parcel. The letter mentions sandals twice not by mistake, but because two different people sent them.2Alternate translations include 'white fields' and 'white meadows'.3These men were not Roman citizens.4Stanegate is Anglo-Saxon, meaning 'stone road'. The Roman name for the road is unknown.5A grasslike plant native to the Mediterranean region, used by ancient Egyptians, Greeks and Romans alike to make writing materials.6That is to say, not copied into a collection of letters or another book.7That's Virgil the poet, not the character from Thunderbirds.