Naismith's Rule of Walking Content from the guide to life, the universe and everything 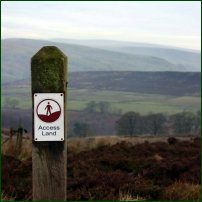 Naismith's Rule is a simple way to estimate how long it will take to complete a walk in the hills. Beloved of Scout Leaders and despised by their charges, it was devised by the Scottish mountaineer William Naismith. Naismith was one of the most eminent mountaineers of his generation, and was a founder member of the Scottish Mountaineering Council. In 1892, he came up with his famous Rule:

It was brilliantly simple to the point of genius. Happily, when hillwalkers moved into metric measurements, the Rule still worked fairly well; three miles is just under five kilometres, and 1,000 feet is close to 300m. So Naismith's Rule still worked perfectly...

It's worth bearing a couple of things in mind before we explain how Naismith's Rule doesn't always work particularly well. Naismith was not only a great optimist, but a very capable and fit mountaineer, and he only considered it to be a rule of thumb. The truth is that it is quite difficult to maintain a steady speed of 5km/h, and walkers often encounter bogs and steep or difficult terrain. Some are not as fit as they might be or haul heavy packs around with them, and bad weather can often slow walkers down.

Faced with the reality of being on the hill in less-than-perfect shape and occasional inclement weather, many walkers decided not to strictly adhere to Naismith's great Rule. They decided to just treat it as a minimum time for their walk, or add 25 or 50% onto it. This solution was far too straightforward for some, though. Searching for the perfect formula, other mountaineers came up with their own 'corrections' to the simple rule.

The difficulty of the ground crossed is an important variable, which there have been various attempts to quantify. In 1977, Bob Aitken suggested that 5km/h is only a reasonable speed on footpaths and roads, and that 4km/h should be used as the base speed for all other terrain. Eric Langmuir, in his classic Mountaincraft and Leadership, rewrote Naismith's Rule to account for downhill stretches:

Whether mountaineers now carry protractors into the hills is not a point worth debating. However, it is clear that the nature of the terrain can introduce significant inaccuracy into Naismith's Rule.

Perhaps the most famous - or infamous - adjustment to Naismith's Rule was formulated by Phillip Tranter, a Scottish mountaineer who was the first person to climb Scotland's Munro mountains twice and has a circuit of Glen Nevis named after him. 'Tranter's Corrections' use the number calculated by Naismith as a base figure, then add in a fitness factor - the number of minutes it takes a walker to climb 300m in an 800m walk:

Complicated enough? No, not quite. There are corrections to the corrections. You should drop a fitness level if you are carrying a 20kg load, walking into a headwind or travelling at night and, somewhat vaguely, drop one or more fitness levels depending on conditions underfoot.

Cleverly, though, Tranter's Corrections account for fatigue as well. The downside is that, for it to be accurate, you must first work out the fitness level of everyone in your group. And it can take one heck of a lot of calculation.

In preparation for something called the Cheshire Hike, we had to make route sheets for all our walks. Fair enough, but our Scout Leader insisted we include columns for Naismith, and count every contour we crossed on our maps. Again, this would possibly be fair enough if we were anywhere other than Cheshire - which is, of course, basically flat.
- an h2g2 Researcher.

Most people encounter Naismith for the first time as teenagers. Budding expedition planners are usually given a form known as a 'route card' to fill in, giving details of each leg of the walk and space to fill in directions and bearings. There is normally a column for Naismith, and an important part of the task is to count the contours and add a minute for each one crossed1. It seems repetitive at the time, but it is an important exercise nonetheless; though Langdale Pike in Britain's Lake District is only a kilometre or so from the start of the climb behind the Old Dungeon Ghyll pub, the contours alone add almost an hour to the walk.

On the ground, when there is less scope for complex calculations, Naismith's Rule is used as a basis for estimating distance by micronavigators and orienteers. Used in reverse - to judge distance travelled by your walking speed - it can be a very helpful navigational tool if you can accurately estimate your speed.

For all its flaws, Naismith's original Rule is still pretty good value for its simplicity. A study of Naismith's Rule by Leeds University students in 1998 found that it is accurate to within 25% on major routes in Scotland and the Lake District - regardless of weather conditions, terrain or fitness levels. Sometimes the best ideas are the simplest of all.

1Countour lines are marked every ten metres, which handily adds on one minute under Naismith's Rule.