Durham Cathedral, Durham, United Kingdom Content from the guide to life, the universe and everything 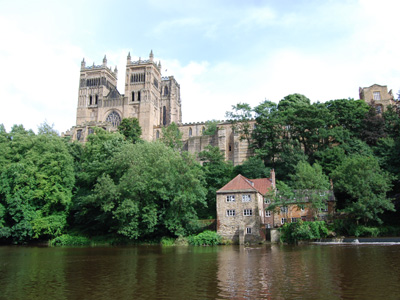 Bishop William St Carileph designed Durham Cathedral in 1093. Bishop William was one of the early 'Prince Bishops' of Durham, set up after the Norman conquest to rule over the far north of England and prevent attacks from the people of Scotland. The Cathedral as Bishop William designed it was finished circa 1137. This comprised the nave, choir, transepts and chapter house.

Durham Cathedral is built in the Romanesque style. It has high-vaulted roofs, and massive columns to support the structure of the building. Some of these have spiral and zigzag decorations, and are very impressive. After the time of Bishop William, two major additions were made to the Cathedral.

Between 1175 and 1189 the Galilee chapel was built at the western end of the Cathedral. This houses the remains of The Venerable Bede, England's first historian, and was built by Bishop Hugh Le Puiset1.

Between 1242 and 1274 the Chapel of the Nine Altars was built by Bishop Richard Le Poore. This has a 90ft Rose window, which was originally built in the 15th Century, depicting Christ and the Twelve Apostles.

During Medieval times, Durham was a centre of pilgrimage, as the Cathedral was home to the Shrine of St Cuthbert of Lindisfarne. Before Henry VIII's dissolution of the monasteries, St Cuthbert's tomb was richly decorated, and home to many gifts of jewels and other precious objects contributed by royalty, nobles and church people. However, all of this was confiscated, and the plain grey tomb we see today is all that was left.

Durham Cathedral was also a centre for criminals seeking sanctuary. A criminal would bang the sanctuary knocker at the north door on Palace Green to alert one of the watchmen. They would be admitted into the cathedral, and offered sanctuary for 37 days. They were obliged to confess the details of their crime to the coroner, and they had to change their clothes for a black robe with a yellow cross on the shoulder. By the end of the 37 days, during which time they would be looked after at the expense of the church, the criminal had to leave the country by an assigned port. Hartlepool was the port assigned to Durham. If they did not do this, or deviated from the King's highway en route, they were executed.