Mozart: The Catalogue Aria Content from the guide to life, the universe and everything 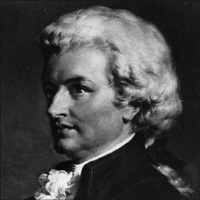 The 'Catalogue Aria' is the popular name for the aria Madamina, il catalogo è questo, from Act 1 Scene 2 of Mozart's great opera buffa1 stage work, Don Giovanni. Arias of this type, built around the recitation of lists, were regular set pieces in such operas, and extremely popular with 18th Century audiences. In Don Giovanni, it is also one of the comic highlights of the drama — which is probably why its fame and popularity continues to the present day.

In this opera, Don Giovanni is the libertine character otherwise (and perhaps better) known as Don Juan; Leporello (who sings the aria) is his man-servant. The third important character, the one to whom the Catalogue Aria is addressed, is Donna Elvira, described as a lady of Burgos. The opera is set in Spain, in 17th Century Seville.

Mozart's opera opens outside the house of Donna Anna, where Leporello is skulking, waiting for his master. Don Giovanni is inside, vigorously trying to seduce the lady — she is unaware of his identity as he is wearing a mask. Don Giovanni emerges from the house, with Donna Anna clinging to him, trying to identify who has attempted to rape her. Her elderly father — known as the Commendatore — appears and foolishly challenges Don Giovanni to a sword duel, which he tries to avoid, given the age of the older man. The Commendatore however insists, and in the course of the ensuing fight, Donna Anna's father is killed. Don Giovanni and Leporello beat a hasty retreat, while Donna Anna makes her fiancé, Don Ottavio, swear to avenge her father's killing.

In the second scene, Don Giovanni and Leporello are on the prowl again. Donna Elvira appears, singing about a lover (she is another of Don Giovanni's conquests) who has loved her and left her. Not immediately recognising her, Don Giovanni senses an opportunity to 'comfort' the lady, but when she turns and recognises him, she utters a recitative filled with vitriol for his 'black deed'. Somehow, Don Giovanni manages to sneak off without Donna Elvira noticing, leaving Leporello to pick up the pieces. What shall I tell her? asks Leporello. Tell her anything, says Don Giovanni.

And so Leporello sings the famous Catalogue Aria, in which he proclaims to Donna Elvira, a list, by country, of Don Giovanni's conquests — surely exaggerated:

Leporello goes on to explain that among the contributors to this great list are peasant girls, maid servants, city girls, countesses, baronesses, marchionesses and princesses. If Donna Elvira is supposed to be impressed with this curriculum vitae, it is a failure and she leaves the stage vowing to get her revenge on Don Giovanni.

The position of the catalogue aria in opera buffa

Don Giovanni is far from being the first opera to include an aria of this type; indeed it was almost a mandatory requirement for the opera buffa style of stage work. The objects listed in a catalogue varied widely and could be:

Mozart's librettist for this and a number of his other operas was Lorenzo da Ponte. Da Ponte's text is based heavily on the libretto written by Giovanni Bertati for Giuseppe Gazzaniga's one-act opera with the same name as Mozart's. This includes a catalogue aria sung by a character called Pasquariello, and was first performed in Venice in February, 1787. Da Ponte was not only familiar with the idea of the catalogue aria, but had already written several himself.

In the final scene of the opera, which takes place in the dining room of Don Giovanni's palace, a statue of the Commendatore, which has come to life, enters from the garden outside the window, invites himself to dinner and offers Don Giovanni his hand. Taking the hand, Don Giovanni is captive and is dragged down, unrepentant, into the fires of Hell.

Mozart's Don Giovanni was first performed at the National Theatre in Prague, on 29 October, 1787.