The Hapsburgs to Charles V Content from the guide to life, the universe and everything 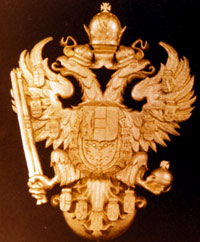 The Hapsburg family dynasty is one of the most important in European history. From their origins as obscure counts in what is now Switzerland, they rose to become the single most powerful family in Europe and perhaps even the world. Their rise sheds a great deal of light on the petty bickering of medieval politics, where kingdoms would be traded among a few powerful families back and forth every generation and every count, duke, lord, and earl dreamed of a way to claw his family one rung higher up the ladder. Brothers, cousins, and nephews plotted to become head of the family. Every ruler watched his back, and even after death a disgraced leader could be punished with a humiliating suffix like 'the Fat', 'the Bald', or even 'the Impotent'. Out of this dogfight emerged a few victorious families; by luck, treachery, and cunning, the Hapsburgs were the greatest of them all.

The Hapsburg monarchy takes its name from a castle in Aargau, Switzerland. According to legend, in 1020 Radbot, Count of Klettgau was out hunting with his hawk, which flew away to the top of a hill. The count followed it, liked the place it led him to, and built a small castle there, which he called 'Habichtsburg', or 'Hawk's Castle'. The family became so fond of the place that they eventually took the name Hapsburg, and it was from this castle that they controlled Thurgau, Switzerland and Laufenburg, in Alsace.

In 1273, Duke Rudolph IV of Hapsburg was crowned Emperor of Rome1, largely due to the efforts of his brother-in-law, Frederick III of Hohenzollern, Burgrave of Nuremberg. The support of Albert, duke of Saxe-Lauenburg, and of Louis II, Count Palatine of the Rhine and duke of upper Bavaria, had been purchased by marrying them off to two of Duke Rudolph's daughters; so that Ottokar II, duke of Österreich2 and King of Bohemia, was almost alone in his opposition.

In 1278, Rudolph used his authority as Emperor to declare war on Ottokar, who had been instrumental in ousting the hereditary Babenbergs from power in Austria. Rudolph defeated Ottokar at the Battle of Dürnkrut and declared himself Rudolph I of Austria3. In 1282 he made his estates into two hereditary duchies, the Herzogtum or Duchy of Austria and the Herzogtum of Styria. Although he initially divided the duchies between his two sons Albert I and Rudolph II, he was survived upon his death in 1291 only by Albert.

Rudolph was ultimately unable to secure the Holy Roman Empire for his son4, and the position was given to Adolf of Nassau-Weilburg. Albert, however, was later nominated by a consortium of German princes and after defeating Adolf in the field was crowned at Aix-la-Chapelle in 1298.

Albert's reign witnessed a series of mixed military ventures, but one definite gain was the conquest of Bohemia in 1306 from Wenceslaus III5. The position of the dynasty was weakened in 1307 by the death of Albert's son Rudolph III, the heir apparent and King of Bohemia. This also resulted in the loss of the Hapsburg claim to Bohemia. Albert was murdered the next year by his nephew John, later called 'the Parricide'.

Splitting of the Lines

The Duchy of Austria passed to Albert's sons Fredrick I (Frederick the Handsome, ruled 1308 - 1330) and Leopold I (ruled 1308 - 1326). Under their reigns, the dynasty was further damaged as Fredrick failed to gain the Imperial throne and an uprising of the Swiss made Switzerland virtually if not technically independent in 1315.

Both dukes died without heirs, leaving authority to two more sons of Albert I - Albert II (1330 - 1358) and Otto (1330 - 1339). Of the entire family, Albert II was the only one to provide heirs, but he made up for it by having four of them: Rudolph IV (1358 - 1365) negotiated the Treaty of Brünn with the House of Luxembourg, which limited the Empire to their two houses, but he died childless and authority passed to his two brothers; At this time, the vision of two hereditary duchies created by the long-dead Rudolph I finally came to pass as Albert III ('Long Hair,' 1358 - 1395) inherited Austria and Leopold III (1365 - 1386) inherited Styria, including Tyrol, Carinthia, and Carniola. The lines were known as the Albertine and Leopoldine respectively, and split officially in 1379.

Albert III was succeeded by Albert IV, who managed to retain the family's land but without gaining any significant power. Albert V inherited the Duchy in 1404. He made an alliance with Sigismund, Emperor of Rome, which culminated in his marriage to Sigismund's daughter and heiress, Elizabeth. Since Sigismund was also king of both Bohemia and Hungary this greatly expanded Hapsburg holdings and realised a long-deferred family desire for control of Bohemia. This was a mixed blessing, however, for at about the same time in 1415 the Swiss (who, perhaps surprisingly, were growing increasingly militant) conquered the old Hapsburg homeland of Aargau, including the ancestral home, Hapsburg castle.

In 1438, Albert was made Emperor Albert II, the only Hapsburg to receive the title of Emperor since his ancestor of the same name. He passed the Kingdoms of Bohemia and Hungary, as well as the Duchy of Austria, to his son Ladislaus V6. Unfortunately, the child king was corrupted by his ministers and died, unmarried, at the age of 17. His death brought an end to the Albertine line and left Bohemia back in non-Hapsburg hands.

Rule of Austria passed to the heirs of the Leopoldine line: Fredrick V and Albert VI. When Albert died in 1463, the entire Hapsburg domains were reunited in the hands of Fredrick - Emperor Fredrick III. After Fredrick the title of Emperor became hereditary to the Hapsburg line, although it was technically still chosen by an assembly of German leaders known as Electors. Also during the reign of Fredrick in 1457, Austria became an archduchy, Erzherzogtum Österreich.

Fredrick passed both titles to his son, Maximillian I, who married Mary of Burgundy, daughter and heiress of the Duke of Burgundy, Charles the Bold7. Although Burgundy itself was claimed by France as the result of Charles's death in battle against the French army, the Netherlands and Franche-Comte came under Hapsburg rule. Even greater gains came from the marriage of their son, Philip I (the Fair), to Juana the Mad, daughter and heiress of Ferdinand of Aragon and Isabella of Castile.

Charles V, grandson of Maximillian, Mary, Ferdinand, and Isabella inherited a vast Empire sprinkled across Europe, including holdings in the Netherlands, Spain, Italy and Austria, as well as the Holy Roman Empire and the new overseas empire of Spain in Africa, Mexico, and Peru. He was considered the most powerful man in the world in his day and still ranks among the most memorable of all European monarchs. Charles was born in Ghent - modern Belgium - on 24 February, 1500, and throughout his life was sympathetic to the Dutch and their adoption of Lutheranism8, despite his own Catholic faith.

Charles became a major force in world politics at a surprisingly young age; at age 16 he became King Carlos I of Spain, at 19 Archduke Charles I of Austria and Holy Roman Emperor Charles V. He was famous for his ability to compromise and keep peace, the only thing that kept together his vast and disparate empire. As well as internal pressure, Charles had to face the opposition of the combined European monarchs who feared his great power. Unfortunately, the strain appears to have been too much for him, since in 1556 he retired to a monastery, where he reportedly had a nervous breakdown. He divided his possessions, giving the Holy Roman Empire to his brother Ferdinand I and his personal empire9 to his son Philip II.

Although the family remained powerful players in Europe, never again would any one person control so much of Europe10.

1A title that also incorporates many others, including King of Germany, King of Rome, Emperor of Germany, Holy Roman Emperor, or sometimes just The Emperor. The title doesn't imply control of the city of Rome but rather the continuation of the legacy of the Roman Empire.2The name 'Austria' derives from the German Österreich meaning 'East Kingdom' because it was the easternmost of the German feudal kingdoms.3All numbers reset after this, making it hard on historians4The title was granted by a group of seven German princes known as Electors: the archbishops of Mainz, Trier, and Cologne, the count palatine of the Rhine, the duke of Saxony, the margrave of Brandenburg, and the king of Bohemia.5Who had been named King of Bohemia by Albert's father, Rudolph I.6Called 'Ladislaus the Posthumus' because he was born four months after his father's death.7The reigning Free Dukes of Burgundy were distant cousins of the Hapsburgs8The teachings of Martin Luther.9Including the 17 provinces of the Netherlands, which had been created in 1548.10The only man to come close, Napoleon, saw his own empire fall apart within his own lifetime