Leonhard Euler - Mathematician Content from the guide to life, the universe and everything

Leonhard Euler1 (1707 - 1783) was one of the greatest mathematicians ever. He worked on all types of mathematics that were known at the time, and made great advances in each of them. He produced a huge amount of quality new mathematical work: an estimated 800 pages a year for nearly sixty years of his life. There's so much of it that in 1911, a team of mathematicians set themselves the task of editing and publishing all Euler's work. They're still at it, and have published 70 volumes so far.

Born in Basel, Switzerland in 1707, Euler is always labelled a 'Swiss mathematician', but he and his family moved to Riehen, Germany, only a year later where he grew up, so the Germans also claim him. His father, Paul, was a Protestant minister, and a friend of the mathematician Johann Bernoulli. Leonhard received a good education; he went to the University of Basel at the age of 13, and received a Master of Philosophy degree in 1723 when he was only 16. The intention was that he would himself become a minister, but his aptitude for mathematics was spotted by Bernoulli, who recommended that he continue his studies. Euler went on to earn a Doctor of Philosophy degree at the age of 19, his thesis being on the physics of sound. He also won a second place in an Academy of Paris competition regarding the optimum placement of masts on sailing ships.

In 1726, at the age of 20, Euler was appointed to the newly formed Academy of St Petersburg, Russia. He took up the position in 1727; the post was initially a medical one, but his brilliance at mathematics was quickly recognised and he moved into the mathematics department. The Academy was founded for the purpose of improving the state of knowledge in Russia; Euler's job involved some teaching but he was also encouraged to do research. Unfortunately, the political climate in Russia was changeable, with the Russians being very suspicious of foreigners. Euler was encouraged to keep his mouth shut and just get on with the job. Later when he returned to Germany, he was accused of being taciturn. His reply was 'Madam, I have come from a country where people are hanged if they talk'.

Euler's great talent quickly advanced him through the ranks at St Petersburg. He became professor of physics in 1731 and head of mathematics in 1733. He married Katharina Gsell in 1734, a marriage which was to last 40 years until Katharina's death.

In 1734, Euler was appointed to a post in Berlin. He and his family moved there and remained there for 25 years. He worked at the Berlin Academy, under the patronage of Frederick the Great.

Euler's most important published mathematical work came from this period. Published in 1748 in Latin, like all scholarly works of the time, it bore the title Introductio in analysin infinitorum (Introduction to infinite analysis). It was even published under the Latin version of Euler's name: Leonhardo Eulero! In the words of historian of mathematics Carl Boyer:

[The Introductio] is probably the most influential textbook of modern times... [It] did for elementary analysis what the Elements of Euclid did for geometry.

Around the time that Euler moved to Berlin, his eyesight started to deteriorate. He attributed this to eyestrain due to intricate map-making work he had done in Russia. He gradually lost the sight in his right eye, earning him the nickname 'Cyclops', but his left eye was healthy until he got a cataract in it and lost his eyesight completely. By 1771, he was almost totally blind. He continued to work on mathematics for many years after this, aided by his photographic memory, and dictating his work to a helper.

By the mid-1760s, Euler was no longer popular in Berlin. He was good at explaining science and mathematics, but was not witty and was uninterested in the learned discussions of Voltaire and the other philosophers who frequented Frederick's court. In 1766, he was invited back to St Petersburg. Things had settled down there with the accession of the new empress, Catherine the Great. Euler returned to St Petersburg and remained there for the rest of his life.

Euler worked as a mathematician right up to his death in 1783 at the age of 76. On the day he died, he gave a mathematics lesson to one of his grandchildren, did some research on the motion of balloons, and had a discussion on the subject of the newly discovered planet Uranus. He died of a brain haemorrhage.

Some of Euler's Innovations

Euler did a huge amount of work developing the theory of functions, making the idea of a function central to mathematics. In addition to working out how to handle all the trigonometric and logarithmic functions, and doing a large amount of work on the treatment of complex numbers, he is responsible for most of the notation we use today. Unlike much of 18th Century mathematics, Euler's work looks modern, because he invented the notation. Here's a small sample of the things he introduced which any mathematician today would use on a day-to-day basis:

An example of Euler's approach can be seen in the problem of the Königsberg bridges. In the 18th Century the town of Königsberg was the capital of East Prussia. Situated on both banks of the River Pregel, there were two islands, and the parts of the town were joined by seven bridges. The small island was joined to the north and south banks by four bridges, two each. The large island was joined to the two banks by two bridges. Finally, there was a bridge joining the two islands together. The people of Königsberg liked to go for walks. Someone asked the question, is it possible to go for a walk which takes in all the bridges once each, and returns to its starting point? 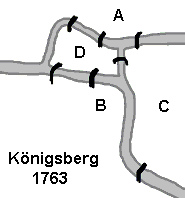 Euler heard of the problem and applied his mathematical brain to it. He showed that it was impossible. Each of the four regions of the city (south bank, north bank, small island and large island) have an odd number of bridges leaving them. If you want to start in any region and end up in that region, then you must obviously leave and come back. You must leave the same number of times as you return, and since you're not allowed to use the same bridge twice, there must be an even number of bridges connected to the region. For a complete round trip taking in every bridge, all regions must have an even number of bridges. Furthermore, Euler showed that a walking tour starting in one place and ending in another would be possible if there were exactly two regions with an odd number of bridges.

The solution to this particular problem is not very profound, but Euler didn't just solve the problem; he invented a new branch of mathematics called 'topology' which not only solved this problem but solved any variation of it. He laid down the conditions for determining whether such a walk is possible in any city with any combination of rivers and bridges. Topology has far more uses than just bridges and rivers. It can be applied to any problem where it is important how items are connected to each other, regardless of their size and position.

Sadly, Königsberg was flattened during the Second World War. Not only were all the bridges destroyed, but so were most of the buildings. Now known as Kaliningrad, it is part of Russia and is a bleak place by all accounts, an industrial city with huge port. As you can see from the overhead map, the arrangement of bridges now is different. Euler's rules can still be applied to plot out walking tours, though today's local inhabitants will enjoy less elegant surroundings on their walks.

Most problems in mathematics have either been solved by Euler or had some significant work done on them by him; there are very few branches of the art which haven't been touched by him in some way. Usually when studying any unsolved problem, the first thing you should do is to see what Euler said about it.

For example, we have the case of the odd perfect number. The divisors of a number are those numbers smaller than it which divide into it evenly. The divisors of 12 are 1, 2, 3, 4 and 6. If the divisors added together equal the number, then the number is said to be perfect. All known perfect numbers are even; mathematicians have struggled for years to either find an odd one or prove that there are no odd ones.

Before attempting to solve this problem, note that Euler managed to prove that any odd perfect number, if it exists, will be expressible in the form ia.jb.kc... where i, j, k... and a are all in the form 4n+1 (that is, one more than a multiple of 4) and b, c... are all even.

But that was obvious, wasn't it?

Euler's Contributions to Other Disciplines

Euler wasn't just a mathematician. He worked in the related fields of physics, astronomy and engineering. Here are just a few of his contributions:

It's difficult for us to approach the works of Euler - we can all appreciate the skill involved in a Da Vinci painting or a play by Shakespeare, but advanced mathematics is very far removed from what most of us encounter in day-to-day life. His name is not well-known outside the circle of mathematicians2, but all of us will have used his work when we were in school. Euler's contributions will live on in our use of his symbols and notation, every time a schoolboy struggles with a function f(x) or one of us makes a joke about Pi.

1His name is pronounced 'oiler' rather than 'yooler'.2Indeed, physicist Stephen Hawking doesn't even include him in his list of great mathematicians.