First Steps to Survival in an Inflatable Liferaft Content from the guide to life, the universe and everything 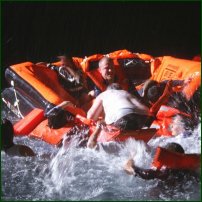 So, there you are on a cruise of a lifetime. The cocktails are keeping you happy, the stewards are at your beck and call and the several grand you've spent on the experience seems well worth it. You're in the middle of the Pacific and a thousand miles from anywhere, despite which you're living the high life. Marvellous! Until...

You wake up one night and there's water up to your ears. The ship's at a funny angle. There are alarms going off everywhere. People are screaming. You get out of your cabin, but the next few minutes are a blur, until you find yourself cold, wet and in an inflatable liferaft with a few random other people not knowing what to do...

Right, let's keep things simple. You're not trained in this sort of thing, but there's no crew with you and someone has to take charge. So if you remember nothing else, remember this: Cut, Stream, Close and Maintain.

Before you can be stranded adrift in a liferaft, you have to actually be in the liferaft. This can be trickier than it sounds.

If there is a means of climbing from the sinking ship into the liferaft (like a ladder), use it. You don't want to be wet and freezing if you can just as easily be dry and freezing. If there is no means of climbing down and you must jump, do not jump into the raft. Jumping into the raft will likely break either one or both of your legs, or break the legs or other vital body parts of those already in the raft. If you have to jump, aim for the water - better to be wet and freezing than unable to swim or walk.

Now on to the business of saving yourself!

This means cut the painter. The painter is the line (or rope, if you prefer) that's got you attached to the rapidly sinking ship. There's a knife kept next to the painter in the liferaft. It doesn't have a sharp point, so that there's less danger of damaging the inflatable raft. Gather in as much of the line as you can before you cut it, this might come in handy.

The painter should be attached to a hydrostatic release on the ship that will automatically cut the line when the ship is about four metres underwater, but occasionally this doesn't work, or the line may get tangled up in debris. This is why you might need to cut it.

In the liferaft somewhere are paddles and something that looks like a windsock, called a sea-drogue or sea-anchor. Use the paddles. Use the sea-anchor by throwing it away from you and pulling on it to get away from the side of the ship. You can lose buoyancy and get dragged down or else get pierced by a piece of flotsam. A bit of clearance will also give you time to think. If the water is rough, the sea-anchor will also help to keep you stable, or if not it will stop you drifting too far from the wreck site. That's essentially what 'streaming' is, so be sure to do it!

Nobody will survive very long if they're exposed to the elements for a lengthy period, so if you are in an enclosed raft, close the hatches to keep the heat in. You can open them again later if it's too hot.

This is where the surviving comes in. People have survived for three months and more in inflatable liferafts. People have also died within hours because they didn't know what to do. Written on the deckhead (roof) of the raft or elsewhere is a list of preliminary instructions. Follow them! There are a whole load of things that you can do to keep yourself alive.

Even if you've never been seasick in your life, take the seasickness pills if they are present. Dehydration rates will increase if you're chucking up everywhere, and it will help to keep an already difficult situation a little less unpleasant. If it's cold, then bail out the water and inflate the floor. Huddle together for warmth, and pay particular attention to any injured members you have. Give people tasks and responsibilities, such as manning the radio, watching for other swimmers or keeping a look out for rescuers, to keep them occupied and their minds off the situation. Morale and the will to live can be more important than anything else.

Your liferaft may be equipped with emergency radio equipment; if it is it should be pre-set to an international distress frequency. There will be simple instructions with the radio, and although it's likely the crew of your former vessel managed to get off an SOS, you can use this to continue to call for help.

You obviously want to be looking out for rescuers but you also want to find other survivors. Several rafts strung together make a bigger target than a single one and more rafts means more water, food and other essentials.

In your survival pack there will also be a book called Handbook for Survivors, this will give you a whole load of information on keeping yourself alive, as well as giving you something to read whilst you await rescue (unless somebody brought the latest best seller with them and managed to keep it dry).

This is the modern world, even if help isn't at the scene within a couple of minutes, it will be there in hours or days. Any half-decent crew will have got a Mayday sent off by several means. Use your resources. You can survive without water for three days and without food for 30 days. Help will be on its way; just remember that nobody is a survivor until they're back on dry land, and you'll be fine.