The Cathedral Square of Pisa, Italy Content from the guide to life, the universe and everything 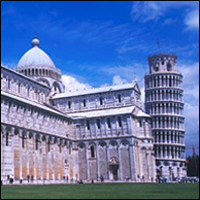 The Leaning Tower of Pisa is one of the most recognisable buildings in the world. However, it is only part of a collection of buildings of outstanding artistic and architectural interest. This complex makes up the Cathedral Square or Piazza del Duomo, also known as the Field of Miracles or Campo dei Miracoli. As well as the cathedral and leaning bell-tower, the complex, surrounded by lawns, includes the baptistry and the Camposanto, or monumental cemetery. Because of the soft underlying soil, both the baptistry and the cathedral lean out of the perpendicular, though not as dramatically as the Leaning Tower. The Piazza del Duomo is now a UNESCO World Heritage Site.

The cathedral or Duomo was begun in 1064, and is built in the Romanesque style, with rounded arches. The horizontal layers of grey and white marble, and the detailed carving of the pillars and archways produce a distinctive Pisan Romanesque look, which has influenced many nearby towns and cities.

Most of the interior was destroyed by fire in 1595, so there are few medieval features inside the building. One that survived is the giant mosaic of Christ the King (1302) in the apse1. This mosaic is attributed to the artist Cimabue. The other survival is the carved marble pulpit (1302-1311) by Giovanni Pisano. This masterpiece of medieval sculpture was out of fashion by the late 1500s, so during the re-modelling after the fire, it was simply packed away. It was rediscovered in 1926 and restored to its original position. This pulpit has beautifully carved panels of biblical scenes, and is regarded as the masterpiece of the Pisano family.

The baptistry was begun in the 12th Century, with a Romanesque ground floor, with rounded arches and horizontal layers of marble. Money ran short, however, and the work was left unfinished for nearly a century. When the work was restarted, it was in the Gothic style and under the supervision of Nicola Pisano and his son Giovanni. The upper half has pointed Gothic arches and pinnacles, and statues of saints and prophets. Many of these statues were taken down in the 19th Century and replaced by copies. The originals were put in the Cathedral Museum. The building is topped by a large dome.

The interior is plain and very bare, which gives it a striking echo. There are two important works of art: the large baptismal font (1246) with rich stone inlay is by Guido Bigarelli; the pulpit (1260) is by Nicola Pisano, with reliefs of New Testament scenes, and animal figures supporting the columns. These are marked out from the earlier Romanesque style of carving by the depth of the figures and the accuracy of representation.

The famous Leaning Tower was built as a campanile or bell tower. Started in 1173, it has the same rounded Romanesque arches as the cathedral and the ground floor of the baptistry. As with the baptistry, there were long interruptions to the building work, and the tower was only finished in the 14th Century. The tilt in the tower was evident from a fairly early stage, and increased very slowly over the centuries. Major restoration work was carried out in the 1990s and appears to have stabilised the structure.

The Camposanto or monumental cemetery closes the north side of the Campo dei Miracoli. It has a much more severe marble facade than the 'wedding-cake' decorated effect of the cathedral. Legend claims that during the Crusades, a medieval bishop brought back a load of earth from Golgotha near Jerusalem. It became a status symbol to be buried in this holy earth, so that the graves of the most highly regarded Pisans were always found here.

Started at the end of the 13th Century, the building is in the shape of a cloister. A gateway leads through the plain outer wall to reach a central lawn surrounded by a walkway under arches. Most of the tombs are under these arcades. The sheltered rear walls of the arcades were covered with over 2,000 square metres of frescoes, which were some of the most important medieval paintings in Europe.

Among the memorials to well-known Pisans is a statue of Leonardo Fibonacci, the mathematician. The cemetery also contains, as a monument, the huge chains which were used to block the entrance of the river Arno against enemies, in the days when Pisa was a great seaport. A large number of carved Roman sarcophagi line the cloister arcades.

Disaster struck in July, 1944, when an incendiary bomb from an Allied plane set fire to the roof of the cemetery. The molten lead ruined most of the frescoes, though restorers were able to save a couple of panels, and the underlying sketches from some of the others. The surviving frescoes are now displayed in a room opposite the entrance. These frescoes were painted around the time of the Black Death of 1348, and show The Triumph of Death and The Last Judgement. Since the name of the painter is unknown, by the conventions of art history this painter is therefore known as The Master of the Triumph of Death. The paintings live up to their artist's grandiose title, with some very gruesome detail in the scenes of death and the devil.

The Cathedral Museum, known in Italian as the Museo dell' Opera del Duomo, is in the old Chapter House, a short distance from the Leaning Tower along the Piazza Arcivescovaldo. It contain many of the more exposed exterior carvings which were removed from the cathedral and baptistry to protect them against weathering. This museum also contains the cathedral treasure of works in gold and ivory.

The Museum of Fresco Sketches

This museum is known in Italian as the Museo dei Sinopie. It contains the underlying sketches rescued from the remains of the monumental cemetery after World War II. They are of interest mainly to serious students of art history. The frescoes are beautifully presented in a specially designed gallery, with walkways to view the higher sections. However, the dull ochre-on-beige colouring and the large missing sections will give the more ordinary visitor a depressing sense of how much was lost in the wartime bombing.

As one of the most famous tourist sights in the world, the Leaning Tower of Pisa attracts enormous crowds of tourists. To cater for them, the Piazza is lined with stalls selling kitsch souvenirs. In summer, this bustle can make the Piazza rather uncomfortable during the day. In the evening, however, the coach tours have gone and the area is more peaceful, allowing a better appreciation of the overall view, and of the external features of the monuments.

1The apse is the rounded area of a church behind the high altar.