Acupuncture Content from the guide to life, the universe and everything 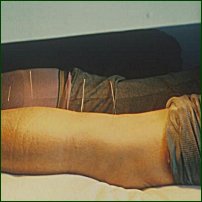 Acupuncture originated in China, as an element of traditional Chinese medicine. At its most basic, it consists of the insertion of needles into the skin of the patient by a trained practitioner. These needles are solid, unlike the hollow hypodermic needles commonly used in Western medicine, and much finer than most such needles. A typical hypodermic may be anything from 0.5mm to 3mm in diameter, compared to a typical acupuncture needle at 0.2mm or less.

Acupuncture was developed before the scientific methods used in Western medicine, and is based on completely different principles. The acupuncture practitioner believes that a form of 'life force', known in Chinese as Qi or chi*, is inherent in all living things*. It flows through the body along a number of known 'meridians', lines running the length of the body and connecting organs to one another. In a healthy person there is an uninterrupted flow of chi to all parts of the body. Health problems are thought to be caused by blockages to the flow of chi, and it is these blockages which the practice of acupuncture aims to address.

These meridians are not physical structures, and Western scientific medicine has detected no anatomical basis for them, or for the concept of chi.

However, chi is a broadly used concept in Chinese thought, from medicine to kung fu. It may be rationalised as a prescientific metaphor, a way of thinking which allows practical results to be achieved even without a conventional scientific underpinning. It's certainly difficult to dismiss the concept of chi when one sees a skilled martial artist 'concentrate his chi' and perform feats which seem to defy common sense.

Pinning down an effect

Western medicine is evidence-based. This means treatments have to be tested to see if they work, and the only reliable, unbiased way to do this is in controlled, randomised double-blind trials.

In a controlled trial of a drug under test, a large group of patients will be divided up. Some, randomly selected, will be treated with the drug. Others will be given a completely inactive placebo.

The procedure must be 'double-blind'. Not only do the patients not know which group they're in - neither do their doctors. If the doctors knew, they would inevitably pass this information to the patients, even if only involuntarily and subconsciously, and this knowledge could skew the outcome of the test.

In this way, if the drug performs better than the placebo, one can be reasonably certain it is due to a real effect, and not just the well-known powerful abilities of humans to heal themselves if they think they're being looked after.

Getting to the point

Of course, it is rather difficult to arrange a double-blind trial of acupuncture. On the one hand, the patient knows perfectly well if you stuck some needles in them or not, so the placebo has to look and, crucially, feel like acupuncture, without being acupuncture. But if an acupuncturist puts the needles in the wrong place deliberately, they'll know they're doing so, and the trial is not double-blinded. Because of this, clinical trials so far are inconclusive.

There is some evidence that acupuncture can be effective in the treatment of nausea and chronic low back pain. However, there is relatively little research on the subject apart from that carried out in China, where it is considered unethical to pretend to treat a patient with a placebo, even for the purposes of a trial. What little research there is from the conventional medical establishment suggests a combination of weak conventional effects and a strong placebo effect.

Poking holes in the theory

The Taoist ideas of flowing chi and the balance of yin and yang have no reality to Western medicine. The placebo effect, however, and the fact that many of the conditions that acupuncture claims to treat are known to clear up without intervention, suggests that acupuncture may have some value even if it doesn't 'work' in the conventional sense that, say, aspirin works to kill pain. It is generally agreed that acupuncture administered by a trained practitioner is reasonably safe.

The actual experience of acupuncture is rather different to that of conventional medicine. A conventional doctor will typically ask for a list of symptoms, make a cursory examination, and recommend a drug for treatment.

Acupuncture functions more like other complementary treatments like homoeopathy or chiropractic, in that the practitioner will take a good deal of time to ask the patient many wide-ranging questions about their health, not just focussing on the particular condition under treatment. There is strong evidence that this extra attention alone is responsible for some of the positive effects patients experience. This inquiry phase will allow the practitioner to assess the patient's condition and decide on appropriate intervention.

At this point, one or more needles will be inserted into the patient's body. Patients report that this is not uncomfortable, and in fact can be quite relaxing. Often, the point of insertion is nowhere near the area where there is a problem. Sometimes the needles will be gently heated by the application of burning herbs, typically mugwort. This process is known as moxibustion. Needles may be left in for anything from a few minutes to many hours before being gently removed.

Getting on your nerves

There are risks to acupuncture, as with any invasive procedure. Mostly these are limited to minor bleeding, bruising and dizziness. Puncturing a nerve with a needle can result in nerve damage, and pushing needles deep into places like the head or chest can have unpleasant effects. This is rarely done, however, and a trained practitioner is unlikely to cause anything worse than a bruise.

It should be stressed, however, that acupuncture is a complementary therapy. It is not and should never be considered an alternative to conventional, evidence-based Western medicine. If you are ill, you should see a doctor first, not an acupuncturist.