Sticking Plasters Content from the guide to life, the universe and everything 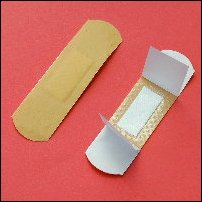 A sticking plaster is a small patch of gauze bandage, set in a strip of flesh-coloured adhesive tape. It is used to cover cuts and wounds that are small enough not to require stitches or surgery.

There are, however, a number of misconceptions about its use and function.

Many people (especially the more hirsute) hate removing sticking plasters due to the acute depilatory1 sensation that removal entails. It is a little-known fact that most sticking plasters have a secret 'quick release' feature. On the standard rectangular strip sticking plaster there are two very thin strips of tape on either side of the gauze. Their surface area is obviously too small to adhere properly to the skin, if this was in fact their purpose. Their real function is to catch on clothes, socks, carpets, and so on. This causes the sticking plaster to immediately lose all adhesion and eject itself into oblivion, never to be seen again2.This usually occurs without the wearer knowing.

Another popular misconception is that the sticking plaster is meant for general use, anywhere on the body. This is not so. The sticking plaster was never intended, or indeed designed, for use on the arms, hands or fingers. Or more correctly, it was never designed to be applied single-handedly.

But if you must use one, and don't want to look like a wuss in the Accident and Emergency Room, please read the following instructions.

Most people who have used sticking plasters will agree that bleeding profusely is actually the more preferable option.