Goongerah, Victoria, Australia Content from the guide to life, the universe and everything 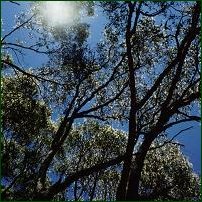 The tiny settlement of Goongerah (pronounced goon-gerr-ar) can be found about 70km along the Bonang Highway from the township of Orbost1, in the thick forest of East Gippsland, Victoria - and is not, as some may suggest, where old goons go to retire.

The name 'goongerah' comes from the native Aboriginal language, the translation being 'egg rock', possibly because of the many large granite boulders dotted atop hills in the area - which look like giant rocky eggs. Nestled in between two major National Parks (the Snowy River and Errinundra Parks), the bushland around Goongerah is not only beautiful and full of magnificent aged trees, but home to many native animals, some rare and in danger of extinction (like the Brush-tailed Rock Wallaby, Long-Footed Potoroo and Spotted Quoll).

Running through Goongerah is the Brodribb River, which plays host to trout, blackfish and sometimes platypus, and there are many deep pools, 'spas' (where the water collects and swirls with the current) and shallower inlets to be found along its course, suitable for swimming. An estuary of the river that branches off near the settlement, Ellery Creek, is another place to find native wildlife and fauna indigenous to the region, including the odd snake or even bunyip, if you believe the locals.

During the late 1970s Goongerah became the site of a large 'hippy' commune, and a place for people who wanted to lead a more 'planet friendly' kind of life. This didn't just mean loads of unkempt hairy people who liked to smoke pot2 and eat nothing but lentils; the commune was made up of not just the archetypal 'hippy', 'greenie' and 'feral', but also young families and people who were concerned about the environment3. Many camped at Goongerah to enable easier protesting against the logging at nearby Goolengook and the Latrobe Valley coal-mining industries, and also wanted to develop and make use of natural energy solutions like solar power.

At first just a mishmash of tents, yurts, tepees and other such dwellings, this changed as houses were built. Some of these houses followed the more traditional route, while others were made with the environment in mind, like long-term resident Jill Redwood's 'Goongerah House' - a dwelling that utilises a solar panel array for power and rainwater tanks to provide fresh water. A waterwheel also supplements power for the home, with nearby Ellery Creek providing current (so to speak).

With a permanent community of roughly 60 people, Goongerah is almost completely self-sufficient, and at the time of writing has Victoria's smallest school, with around six to 12 pupils at any one time (made up of the children of residents). Due to the surrounding Victorian Alps, television reception is almost non-existent (unless you want to invest in satellite), but the idiot box is frowned upon by the locals, who prefer the quiet, peaceful life. This often all goes awry in the summer though, when the population swells with people wanting to contribute to the running of the Goongerah Environment Centre or are there to enjoy 'Forests Forever', an annual celebration of one of Australia's longest logging blockades.

With a history of environmentalism, the people of Goongerah took to protesting about the local logging industry due to the impact deforestation was having on the land. During the late 1970s and 1980s this mostly involved picketing and 'people-power' in the way of demonstration, however there were some instances of more vehement protesters chaining themselves to either trees or logging machinery and trucks, or simply laying down in the mud in front of bulldozers.

The Goongerah locals were a little peeved about all the interloping protesters coming and making a nuisance of themselves, and ruining years of hard work done in reducing logging and expanding the National Parks in the region. To combat the bad image the less than productive protesters were causing the anti-logging movement, the Goongerah Environment Centre Office was set up in the early 1990s. GECO, as it is fondly referred to, enabled those wishing to aid in peaceful protests to come to Goongerah and contribute more effectively, rather than just running off into the forest and abusing logging operatives (who didn't like being abused much, especially by 'bloody ferals and Greenpeace nuts').

The volunteer group relies a lot on students for its upkeep, but GECO has a core of long-time residents of Goongerah like Fiona Cook, who became involved when she saw many ancient trees being knocked down:

It's quite heartbreaking to watch the big logs go down the hill on the back of a truck all day.

GECO has done much to prevent unnecessary logging within East Gippsland, and from humble grassroot beginnings the settlement of Goongerah has become a significant voice in not just helping to maintain the delicate ecosystem around it, but also offering guided forest walks and a wealth of information about alternative ways of life.
1To help you out further, this is about 360km east-ish from the heart of Melbourne.2Cannabis.3And a growing fleet of Kombi vans...