Freegans Content from the guide to life, the universe and everything 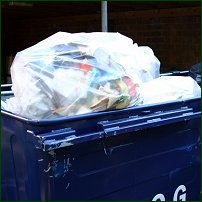 Are freegans 21st-Century Wombles? They don't just collect rubbish from Wimbledon Common, they're cleaning up the things everyday folk leave behind all around the world.

Picture the scene. You're at a dinner party. Your hosts' food is exquisite, their home decor divine. You compliment them on their food, and then politely ask where they bought the stylish new table lamp.

The reply? The food came from the bins of the local supermarket and they found the lamp in a skip.

Does the food suddenly become inedible? Or do you steal an admiring glance at the lamp, and start to wonder about what exactly gets thrown away on our planet every day?

When was the last time you bought a new television? Did you really need it? Was your old one past repair? Or had it simply gone out of fashion; it wasn't a gleaming 42" surround sound high definition box of wonder?

In our advert-saturated world, we are constantly bombarded with glossy images of people living their perfect lives; existences only made possible through the acquisition of the latest must-have gadget. We have to buy a new computer, we need to get those new clothes and our lives simply won't be worth living without the latest DVD player with surround sound.

So off we go to the shops to buy, buy, buy. Even though our old television still works and our old clothes still fit, it has to be out with the old. Not because the item is broken but because it's out of date, no longer fashionable, no longer desirable.

And so the items which were once desirable consumer goods become mere rubbish, destined for the tip.

Freegans believe the products which are unthinkingly consumed and discarded every day are part of a system which pollutes the planet and exploits the poor — all for the benefit of a lucky few in the developed world. They believe producing these products we need in the amounts required while making the necessary profits results in:

and that's to name but a few unsavoury consequences.

The word 'freegan' is a combination of 'free' and 'vegan', in recognition that even a vegan lifestyle cannot guarantee that the products used are produced free from exploitation.

It is difficult to pin down an exact starting point for the movement. However, it would seem the counterculture movement of the 1960s is a possible beginning. In 1971, the American activist Abbie Hoffman wrote Steal This Book. The book, which shows people how to live for free, is also an angry, bitter look at a society in which everything has a price tag.

Freegans tend to hear about each other at environmental meetings or, nowadays, more frequently on the internet. Freegan.info is a New York City-based group with about 20 frequently-active volunteers. The site offers support to people wanting to follow a freegan way of life across the globe as well as running New York based events.

They say the more you look into where products originate and how they are produced, the more difficult it then becomes to consume and discard.

After years of trying to boycott products from egregious corporations responsible for human rights violations, environmental destruction, and animal abuse, many of us found that no matter what we bought we ended up supporting something deplorable. We came to realise that the problem isn't just a few bad corporations but the entire system itself.
Freegan.info

By buying these products, you become part of this system of exploitation and destruction. Your cheap clothes are not cheap after all; the cheap labour that has produced them has come at a terrible price of human suffering. Your toiletries were probably tested on animals. Freegans aim to live their lives in a way which minimises the impact upon the environment and which will allow them to be as independent as possible from the capitalist system.

Freeganism is a total boycott of an economic system where the profit motive has eclipsed ethical considerations and where massively complex systems of productions ensure that all the products we buy will have detrimental impacts most of which we may never even consider.
Freegan.info

Food can be grown on the other side of the world, where it is covered in chemicals, before being flown over to the UK or another destination — and, after all that effort and damage to the environment, it's possible it could be left uneaten and ultimately thrown away.

With friends this week, I served Rondele cheese with crackers, followed by a pasta with tomato and eggplant sauce, a lovely big salad, and strawberries with whipped cream for dessert. The following morning I had a big glass of fresh squeezed grapefruit juice, then an omelette with shitake mushrooms and fresh sage, accompanied by whole-grain sourdough toast.

Far from buying these items of food in a posh delicatessen, Madeline found them all in a bin. It is estimated that up to 90% of the total waste that is thrown into bins in the UK is recoverable.

On the way home from a meeting, I took home a nearly-new Silverstone bundt pan (representative of numerous cooking utensils people toss when they 'upgrade' or change their kitchen colour scheme) and a working halogen desk lamp with an attractive royal blue shade. The week before I found a chrome picture frame outside a frame store; just needed polishing up.
Madeline from freegan.info

Our throwaway culture is creating some big problems. What to do with all the discarded products? Freegans say by removing what would otherwise be going to landfill, they are helping to recycle the rubbish of a wasteful economy. The Earth does not have limitless resources; nor is it a bottomless pit for our waste.

Two million working Pentium PCs end up in landfill sites in the UK every year. Indeed, electronic waste is the fastest growing waste stream in the UK.

In July 2007, new legislation came into force in the UK. The EC Directive 2002/96/ on Waste Electrical and Electronic Equipment (WEEE) means manufacturers of electronic goods are legally obliged to pay for their recycling and treatment costs. However, the UK has been slow to bring in this law. In Holland for example, this directive was passed in 1999.

One h2g2 Researcher1 made this point when asked about freeganism:

As I understand it, throwing away food is a necessary part of business. For example if a bakery was to give away whatever it hadn't sold at the end of the day, people would just stop buying anything from then and wait until the end of the day so they could get it free.

That is a reasonable statement — businesses are not charities after all, they need to make money. Nicky Fisher, Sustainability Manager from Pret A Manger says:

Pret insists that there is a certain amount of waste (3%) to ensure customers have a choice/selection of products right up to closing time in each shop.

However, it is the amount of food going to waste that is a concern.

There are 6.55 billion people living in the world today. Out of those, 854 million are hungry.

It is estimated that, on average in the UK, we throw away 2.7kg of food per person, per week. Freegans point out that it should not be acceptable to have so many people going hungry while so much food goes to waste. Now consumers are starting to voice their concerns, businesses are starting to address this issue.

Nicky from Pret A Manger says any leftover food from the shops is collected and delivered to over a dozen homeless shelters and hostels; providing in excess of 10,000 meals for the homeless in London weekly.

Organisations such as Fareshare work with food businesses to minimise waste. They collect unused food and distribute it to up to 12,000 disadvantaged people in 34 cities and towns across the UK.

Although initiatives like those mentioned above are certainly encouraging, freegans would no doubt point out that the fact that they can still find edible food in bins suggests that it accounts for only a tiny proportion of discarded food. Food waste still accounts for around 17 million tonnes of the UK's total waste stream, with the majority of this currently going to landfill at a cost of somewhere in excess of one hundred million pounds per annum2.

It would appear consumers are becoming increasingly concerned over the way products are manufactured, and companies are starting to take notice. Ethical consumerism might still be a niche market, but it is a fast growing one. In 2005, it was worth £9.3billion in the UK3. However, this is no time for complacency; there is still a very long way to go before this world corresponds to the one in which freegans would like to live.

If this article has whetted your appetite for a more sustainable way of life, but you don't fancy diving into a bin, Madeline from Freegan.info offers these pointers:

1Researcher 168677 Xanatic, an introvert exomorph.2Taken from Inetec's website. Inetec is a company which studies the problems of food and non-recyclable packaging waste as faced by large scale food manufacturers.3Co-Operative Bank Ethical Consumerism Report.